Following up on my previous post, Location In Red Or Blue States Influences Whether Colleges Are Teaching On-Ground (Red) Or Online (Blue) This Fall:  Inside Higher Ed, Political Divide Over Colleges' Fall Reopenings: 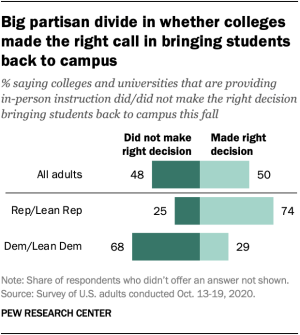 The American public is divided over just about everything — so why wouldn't it be divided over whether colleges and universities should have brought students back to their physical campuses this fall?

A survey released by the Pew Research Center this week finds Americans split down the middle on the question of whether colleges that are providing "in-person instruction did/did not make the right decision bringing students back to campus this fall."

Fifty percent of those surveyed by Pew said colleges made the right call — while 48 percent said they did not. But as will probably surprise no one, the proportions look very different by political party.

Almost three-quarters of Republicans (74 percent) said that colleges and universities that opened their campuses for in-person instruction made the right decision, while more than two-thirds of Democrats (68 percent) said the institutions were wrong to open.

Just reiterating the point, but the "Party of Science" opposed in-person learning, despite the well-establish medical fact that Americans under 50 have a survival rate from coronavirus of literally 99.98%.