[L]et’s take a moment to contemplate how tax avoidance and evasion have become facts of life for some of the richest Americans.

They’ve done so with the connivance of our lawmakers, who have tied the hands of the Internal Revenue Service. The latest analysis of the situation came to us last week from David Cay Johnston, a journalist who has made the inequities of the income tax into a personal cause.

Here’s the most eye-opening statistic. Some 23,456 U.S. households reported income of $10 million or more last year (that is, for the 2018 tax year), averaging more than $26 million each in taxable income. The IRS audited seven of them. 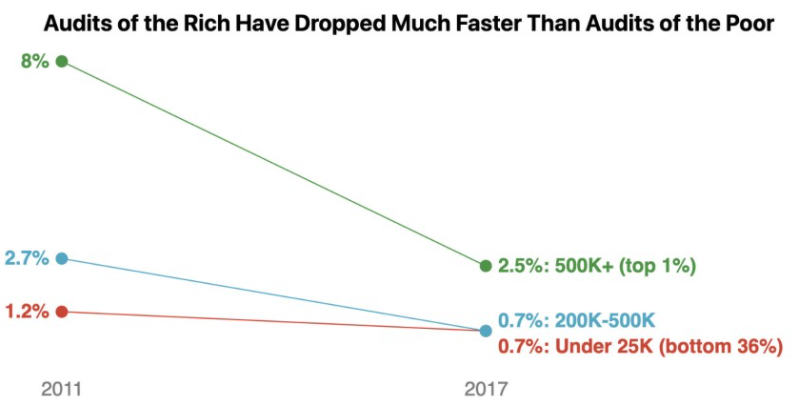 That comes to less than three-hundredths of a percent. That’s about the chance of being struck by lightning at some point in your lifetime. So it may not be surprising that wealthy taxpayers don’t think they’re living dangerously with the IRS. ...

Congress and a succession of White House administrations — on both sides of the aisle — have systematically gutted the auditing and enforcement capabilities of the IRS. In 2010, the agency had 94,700 full-time staff and a budget of $14.7 billion. By the last fiscal year it was down to 73,554 full-timers and a budget of only $11.8 billion.

Woody, I accurately cited what the IRS reported in its annual report. The IRS has no dispute about the factual accuracy of our report, which covers not just audits, but also the collapse of criminal referrals and acceptance of those referrals.

Reminds me of those endless articles one used to see about how the IRS was losing billions through "tax loopholes". BOOO!!! HISSS!! Turned out half of that money was gone through the mortgage interest deduction and another good chunk through the "SALT" deduction. Trump put a crimp in both of those deductions--Biden wants to restore them.

Johnson: "People whose average income is just $12,600 are nine times more likely to be audited than those making more than $10 million."

Conversely, approximately 10% of households earn less than $15,000 per year. The fact they're audited 9 times more often than those making over $10 million per year may have something to do with the fact that they're 1000 times more of them.

Gerald "Leave it to MM to turn an article about tax fairness into another whine about the taxes paid by the rich."

Leave it to Gerald to be so easily triggered by a simple question, which he or she evidently considers unimportant vis-a-vis tax progressivity. And its totally false for Gerald to claim I would pay less in taxes if wealthy people cheated less. My federal taxes are based on my income and the tax brackets I fall into. Nothing less and nothing more.

@DCJ - Thanks for the commentary and research, keep up the good work.

Happy to supply the information, which you will find more fully presented at DCReport, which Michael Hiltzik of the LATimes credited and linked to. https://www.dcreport.org/2020/10/30/trump-income-taxes-how-he-gets-away-without-paying/

You seem to have missed the point of Hiltzik’s column, which I will come back to.

The $10m and up income group measures slightly differently in IRS Table 1.4 than in the IRS Databook because different time periods are covered.

That rate is significantly lower than the rates paid by those making $1m up to $10m. Their effective tax rates were as high as 27.6%. once income reaches about $8 million.

What we don’t know is how much income this group actually collected. We don’t know much in illegal deductions was claimed. Indeed, under Trump we quit looking,

In Trump’s first full year as president, the IRS conducted 7 audits of people making $10 million and up – a group with significant UNverified income, which we know from extensive government research is rife with cheating.

IRS referrals for criminal prosecution fell more than 90% under Trump and the Justice Department rejected 82% of the few proposals outright. Just 29 cases in the year ending Sept. 30 were accepted for consideration.

You may also find it informing about the collapse of tax law enforcement under Trump to read this about a Trump supporter and neighbor who collects more than $100 million per year without paying taxes and how the criminal investigation ended abruptly when Trump assumed office: https://www.dcreport.org/?s=Koch+Papers&search_button=Search

My piece at DCReport, the first of a four-part series, is about how the always weak criminal enforcement of tax law in America collapsed under Trump. The facts come from the official documents that are the primary source for all DCReport journalists. We never attend press conferences or work from press releases. We use named sources. No one has shown a single error in the four years since our founding, but many major news organizations have been far behind our reporting, in one case three years behind.

The rest of the series will show how the tax police are hobbled by Congress, under a system that favors rich tax cheats, and what can be done to make it more likely the tax police will detect criminal and civil tax fraud.

By the way, as my piece shows from the official data, under Trump people whose average income is just $12,600 are nine times more likely to be audited than those making more than $10 million.

Just imagine if your mayor ordered the street cops to investigate every tricycle theft, but to not look for felonies – or who committed them.

Those are facts, not advocacy.

I'm no statistician, but: Based on a total population of 23k returns and knowing nothing else about the returns, and for a confidence level of 95% and a confidence interval of 5, you'd need to pull a sample about 375 returns for compliance.

These "richest Americans" are covered by the automated matching program, which is a correspondence audit method that reduces the need for field audits, but perform as audits none the less. So, the rich are really audited at a higher rate than reported here.

Apparently, when the "poorest Americans" are caught claiming phony tax credits by this program, it is claimed that they are unfairly targeted by "IRS audits." When the "richest Americans" are checked or caught by the same program, liberal journalists no longer consider the program to be audits. Of course, double standards and interpretations are necessary for the agenda.

There is one sure way to get audited though -- just step over the line with a Democratic politician and he'll have the IRS on you in no time. Ask Paula Jones, Juanita Broaddrick, Gennifer Flowers, Tea Party groups, and conservative organizations.

Leave it to MM to turn an article about tax fairness into another whine about the taxes paid by the rich.

I wonder what the outcomes were for the seven who were audited?

While I appreciate advocacy journalism, this does beg the question. Rough math suggests these households collectively reported $600 billion in taxable income.

So what did they pay in federal taxes? That matters, especially if the issue is the fairness or lack thereof of the current tax system.