The Insufferable Hubris Of The Well-Credentialed

Chronicle of Higher Education, The Insufferable Hubris of the Well-Credentialed: 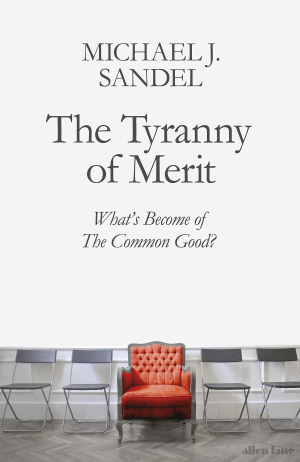 The Harvard political philosopher Michael Sandel’s 10th book, The Tyranny of Merit, out this month from FSG, covers a lot of ground for a short text — especially in its sweeping second chapter, “A Brief Moral History of Merit,” which, following Max Weber, describes the surprising emergence of the “fiercely meritocratic work ethic” out of the Protestant Reformation’s “war against merit.” From these origins, Sandel says, would eventually appear such diverse phenomena as mega-churches preaching the “prosperity gospel,” the weakening of the welfare state, and the increasing importance of the university system as a source of not just earning power but personal prestige. President Trump, for instance, likes to say that he went to Wharton, which he insists is “the hardest school to get into, the best school in the world … super genius stuff.”

The Tyranny of Merit hopes to explain the cultural background behind this bit of Trumpian braggadocio, and more broadly to argue that a just political future must recognize that even a perfect meritocracy would be fundamentally unfair. I talked with Sandel about resentment and hubris, the trauma of the elite-university admissions process, the problem with economists, and pull-ups.

Critiques of meritocracy are on everyone’s lips right now. Why?

I think it’s partly due to the events of 2016. The populist backlash against elites was a big part of the vote in Britain for Brexit and the election of Trump in the U.S. That prompted a reflection on what it was about elites that many working people so resented.

Looking back at the last four decades, it’s clear that the divide between winners and losers has been deepened, poisoning our politics and driving us apart. This has partly to do with deepening inequality of income and wealth. But it’s about more than that. It has to do with the fact that those who landed on top came to believe that their success was their own doing, the measure of their merit — and by implication that those left behind had no one to blame but themselves. For people who didn’t flourish in the new economy, this attitude toward success made the inequality of the last four decades all the more galling. ...

Let’s talk about your beef with economists. You single out Larry Summers, the Harvard economist and adviser to former President Barack Obama, as symptomatic of the invasion of the corridors of power by the ideology of credentialism and market-based thinking: “One of the reasons inequality has probably gone up in our society,” Summers says, “is that people are being treated closer to the way they’re supposed to be treated.”

That quote is emblematic of the tendency to assume that the money people make is the measure of their contribution to the common good. The tendency to accept this assumption uncritically may be abetted by economists. But it reaches well beyond the economics profession — it’s become deeply embedded in our public culture.

We need to challenge this assumption. In recent decades governing elites of both parties have embraced the market faith that says that market mechanisms are the primary instruments for achieving the public good. The market-based version of globalization that governing elites have promoted and enacted since the 1980s has reinforced this market faith. As inequalities deepened as a result of globalization, there was a tendency to attribute these inequalities to the different abilities of people in different social roles to contribute to the economy and by extension the common good.

UT: "was in the title of a dystopian fictional view of the future"

Meanwhile, here on Planet Earth, year after year, survey after survey, consistently find that the vast majority of Americans with over $1 million in net worth earned their wealth in their lifetimes. Less than 10% report inheriting it.

Your obligatory reminder that the very origin of the word "meritocracy" was in the title of a dystopian fictional view of the future published by the mid-20th century British sociologist Michael Young. It was never meant to have positive connotations, but since irony is dead and in keeping with the grand American tradition of turning British words on their heads (nonplussed, anyone?), here we are.

I wonder if Sandel makes the point that merit is better judged by income than by education. We professors tend to think that credentialism equals meritocracy, whereas credentials are much easier rigged than making a profit or earning a good wage, especially as an owner or on commission.

I watched the principle of credentialism in action after a private equity firm bought a specialized diary company I worked for.

From day one, the new owners slashed an experienced, relatively well-paid low-credential plant workforce and replaced them with fewer, marginally lower cost temporary workers. The well-paid staff of mechanics who had high-school diplomas at best, but who were mechanical geniuses and knew every inch of the plant were eased out.

Meanwhile, the place was crawling with young MBAs toting laptops in PE firm logo’d backpacks. Legal spending was crazy - of course they sued us - and apparently unmonitored, with their lawyers generating long, long windy letters that were costing many thousands each while doing nothing to move resolution forward - billing appeared to be their chief skill. Management managed from a desirable blue state location, not being willing to slum in the red state plant location.

Reports came back to us that the plant was filthy - a diary plant - and they were holding many months’ worth of inventory that was defective and unsaleable. They wouldn’t sell to our top broker, who told us he would be able to move anything he could lay hands on. And they began to cut loose a hard-won supplier network that we regarded as our most important asset (reluctant suppliers for whom supplying us was a small bonus to their main business), apparently believing they can turn them on again at the snap of their fingers.

This was credentialism in action - get rid of the cheap people, expect the vassal suppliers to do as you please, spend lavishly on expensive, credentialed people, and manage it all from a more fashionable location.

(BTW: I don't know if it's your site or my computer, but the site keeps refreshing and dropping what I write.)

The left tends to exaggerate the role of luck at the expense of delayed gratification and other good decision-making. The right does the opposite.
Both, but especially the left, assigns too much credit to credentials, and conflates the educated with the learned.

I have tried to read Sandel - he's an expert/elite from an important school! This is typical Sandel though. He begins by positing that people should not be judged by income and then rails against income inequality. Snarks at markets while he sells in the marketplace of ideas. Must have missed the courses on logic, concentrated on rhetoric, marketing, posturing, and collecting credentials.

F. Scott Fitzgerald noted years ago that the very rich “are different from you and me.”

Today, as author Michael Sandel reminds us, “the university system [has become] a source of not just earning power but personal prestige”; in other words, the “well credentialed” are different from those without a four-year degree.

In fact, many believe that it was a widespread inability to understand this huge voting block - by politicians, pollsters, pundits, and prognosticators - which made Trump’s election so much of a surprise to many.

That why I suggested that - just as universities have women’s studies, Black studies, Hispanic studies, LQBTQ studies, and others - there should be Working Class Studies to help everyone better understand this huge voting block of Americans who don’t have a four-year degree.
See, e.g.:

TIMES HIGHER EDUCATION - Would ‘White Working-class Studies’ Help Scholars Fathom Trump?
Law Professor Says Universities Struggle to Understand the Majority of the Population Who Do Not Have Degrees
https://bit.ly/3ldPFhX

To learn more about my views, consider this Webinar on Wednesday with a Q&A:
Why and How Legal Activists "Sue the Bastards":
My Odyssey From Geek to Gigolo to Good Doer
https://bit.ly/34mF8dE

This is a great book. The author offers frequent reminders of the important role that luck plays in the status of nearly all elites, including having rich parents who can buy your way into an elite university, being born in a developed vs. an undeveloped country and having natural skills that are more adaptable to roles that your society values more than others (high-frequency trading of securities vs. teaching elementary school or primary medical care).

"A just political future must recognize that even a perfect meritocracy would be fundamentally unfair."

Stop the presses. Has America ever had a "perfect meritocracy" in any profession? Will it ever? There are powerful forces, who have tenure or seniority, who work day and night to prevent that from happening.

Conversely, a perfectly equal or "fair" society would be totally unjust. We know where that road leads, but progressives and socialists in America today don't know their history. Which explains why they want to cancel it all.