The Dynamics Of Taxation: Essays in Honour of Judith Freedman 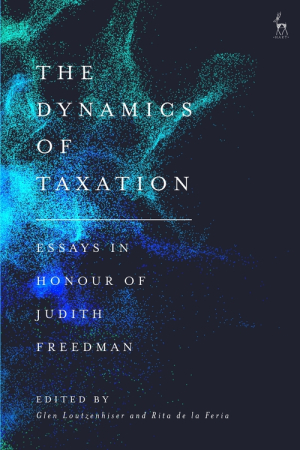 This book brings together a landmark collection of essays on tax law and policy to celebrate the legacy of Professor Judith Freedman. It focuses on the four areas of taxation scholarship to which she made her most notable contributions: taxation of SMEs and individuals, tax avoidance, tax administration, and taxpayers' rights and procedures.

Professor Freedman has been a major driving force behind the development of tax law and policy scholarship, not only in the UK, but worldwide. The strength and diversity of the contributors to this book highlight the breadth of Professor Freedman's impact within tax scholarship. The list encompasses some of the most renowned taxation experts worldwide; they include lawyers, economists, academics and practitioners, from Britain, Canada, Portugal, Australia, Germany, Italy, Malta, Ireland, and Ukraine.

PART I
TAXING SMALL BUSINESSES AND INDIVIDUALS
1. Geoffrey and Elspeth Howe and the Path Towards Independent Taxation of Husbands and Wives: 1968–1980
Glen Loutzenhiser
2. Does an Inheritance Tax Have a Future? Practical Options to Consider
Emma Chamberlain
3. Should the Suggestion that Ownership is a 'Myth' Have Any Implications for the Structure of Tax Law?
Edwin Simpson
4. Income Taxation of Small Business: Towards Simplicity, Neutrality and Coherence
David G Duff
5. Principles and Practice of Taxing Small Business
Stuart Adam and Helen Miller
6. Dependent Contractors in Tax and Employment Law
Hugh Collins