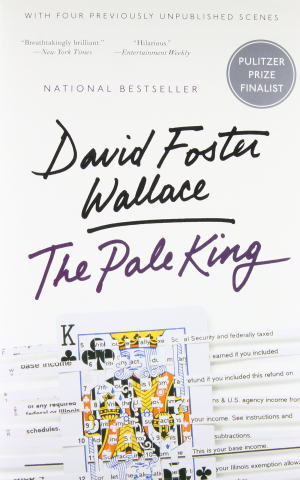 In this posthumous novel, set at an I.R.S. office in Illinois, the agency is a microcosm of human nature: “greed, politics, power, goodness, charity.

The agents at the IRS Regional Examination Center in Peoria, Illinois, appear ordinary enough to newly arrived trainee David Foster Wallace. But as he immerses himself in a routine so tedious and repetitive that new employees receive boredom-survival training, he learns of the extraordinary variety of personalities drawn to this strange calling. And he has arrived at a moment when forces within the IRS are plotting to eliminate even what little humanity and dignity the work still has.

The Pale King remained unfinished at the time of David Foster Wallace's death, but it is a deeply compelling and satisfying novel, hilarious and fearless and as original as anything Wallace ever undertook. It grapples directly with ultimate questions -- questions of life's meaning and of the value of work and society -- through characters imagined with the interior force and generosity that were Wallace's unique gifts. Along the way it suggests a new idea of heroism and commands infinite respect for one of the most daring writers of our time. 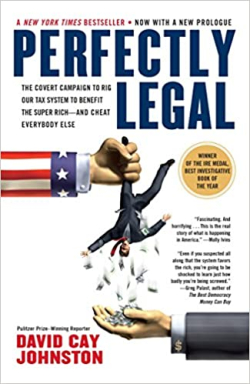 Johnston, a Pulitzer Prize-winning reporter, details how shifts in tax policy dating to the 1970s have benefitted the wealthy and hurt America’s middle class.

Since the mid-1970s, there has been a dramatic shift in America's socioeconomic system, one that has gone virtually unnoticed by the general public. Tax policies and their enforcement have become a disaster, and thanks to discreet lobbying by a segment of the top 1 percent, Washington is reluctant or unable to fix them. The corporate income tax, the estate tax, and the gift tax have been largely ignored by the media. But the cumulative results are remarkable: today someone who earns a yearly salary of $60,000 pays a larger percentage of his income in taxes than the four hundred richest Americans.

Pulitzer Prize-winning investigative reporter David Cay Johnston exposes exactly how the middle class is being squeezed to create a widening wealth gap that threatens the stability of the country. By relating the compelling tales of real people across all areas of society, he reveals the truth behind:

Johnston has been breaking pieces of this story on the front page of The New York Times for seven years. With Perfectly Legal, he puts the whole shocking narrative together in a way that will stir up media attention and make readers angry about the state of our country. 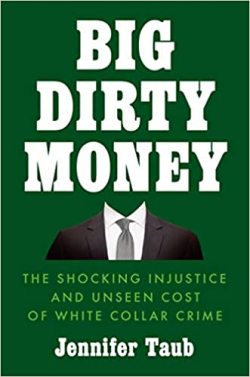 How did white collar crime come to be so pervasive in the U.S., and why do its perpetrators often go unpunished? This new book explores both questions.

How ordinary Americans suffer when the rich and powerful break the law to get richer and more powerful--and how we can stop it.

There is an elite crime spree happening in America, and the privileged perps are getting away with it. Selling loose cigarettes on a city sidewalk can lead to a choke-hold arrest, and death, if you are not among the top 1%. But if you're rich and commit mail, wire, or bank fraud, embezzle pension funds, lie in court, obstruct justice, bribe a public official, launder money, or cheat on your taxes, you're likely to get off scot-free (or even win an election). When caught and convicted, such as for bribing their kids' way into college, high-class criminals make brief stops in minimum security "Club Fed" camps. Operate the scam from the executive suite of a giant corporation, and you can prosper with impunity. Consider Wells Fargo & Co. Pressured by management, employees at the bank opened more than three million bank and credit card accounts without customer consent, and charged late fees and penalties to account holders. When CEO John Stumpf resigned in "shame," the board of directors granted him a $134 million golden parachute.

This is not victimless crime. Big Dirty Money details the scandalously common and concrete ways that ordinary Americans suffer when the well-heeled use white collar crime to gain and sustain wealth, social status, and political influence. Profiteers caused the mortgage meltdown and the prescription opioid crisis, they've evaded taxes and deprived communities of public funds for education, public health, and infrastructure. Taub goes beyond the headlines (of which there is no shortage) to track how we got here (essentially a post-Enron failure of prosecutorial muscle, the growth of "too big to jail" syndrome, and a developing implicit immunity of the upper class) and pose solutions that can help catch and convict offenders. 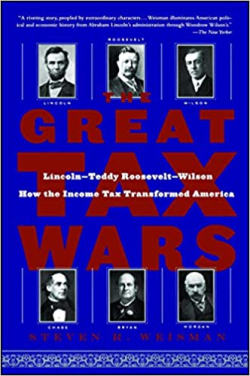 This history focuses on the period between the Civil War and World War I, and traces the U.S.’s tumultuous path toward implementing the income tax.

A major work of history, The Great Tax Wars is the gripping, epic story of six decades of often violent conflict over wealth, power, and fairness that gave America the income tax. It's the story of a tumultuous period of radical change, from Abraham Lincoln and the Civil War through the progressive era under Theodore Roosevelt and ending with Woodrow Wilson and World War I. During these years of upheaval, America was transformed from an agrarian society into a mighty industrial nation, great fortunes were amassed, farmers and workers rebelled, class war was narrowly averted, and America emerged as a global power.

The Great Tax Wars features an extraordinary cast of characters, including the men who built the nation's industries and the politicians and reformers who battled them -- from J. P. Morgan and Andrew Carnegie to Lincoln, T.R., Wilson, William Jennings Bryan, and Eugene Debs. From their ferocious battles emerged a more flexible definition of democracy, economic justice, and free enterprise largely framed by a more progressive tax system. In this groundbreaking book, Weisman shows how the ever controversial income tax transformed America and how today's debates about the tax echo those of the past.