Victor D. Quintanilla (Indiana) & Sam Erman (USC), An Empirical Study of Bar Exam Cut Scores and Their Impact on Disparities and Diversity in the Legal Profession, AccessLex Raising The Bar, Vol. 3, Iss. 4, 2020, at 10:

The choice of a bar exam passing score (“cut score”) is also a choice about the legal profession’s racial and ethnic makeup. That is the finding of our recent empirical study of all California bar exam takers across 11 years of exams, research we plan to publish in future articles and reports.

The analysis rests on our unique dataset: all attempts by all applicants across 21 consecutive administ rations of the California bar exam between 2009 and 2019 (n = 143,198 unique bar exams taken, including n = 85,727 unique examinees). We determined which examinees during the period passed (or would have passed with the scores they earned) at the actual 1440 cut score and at simulated cut scores of 1300, 1330, 1350, and 1390. 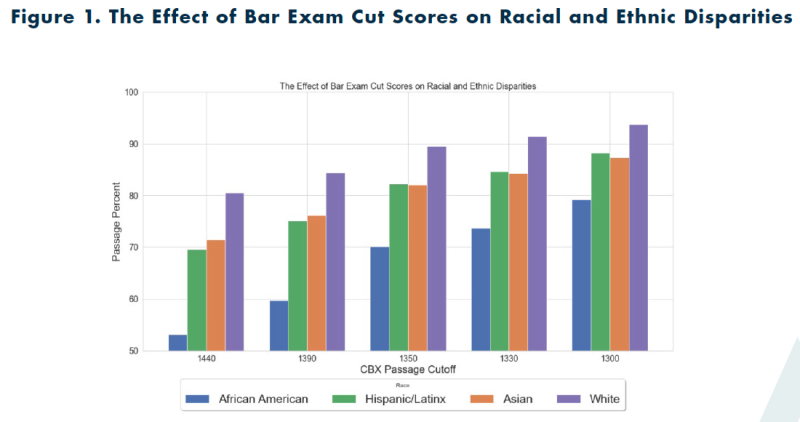 Does the selection of a lower cut score harm the public? We next examined whether the selection of an exam cut score correlates with the number of 1) complaints brought by members of the public against attorneys, 2) attorneys formally charged after probable cause determinations, and/or 3) attorneys subjected to discipline in a jurisdiction, collecting this data from publicly available reports of the ABA Survey on Lawyer Discipline Systems. We gathered this data for all jurisdictions included within these reports and across the most recent six years available: 2013 – 2018. ... Ultimately, we found no significant relationship between the selection of an exam cut score and these three indicators. ... 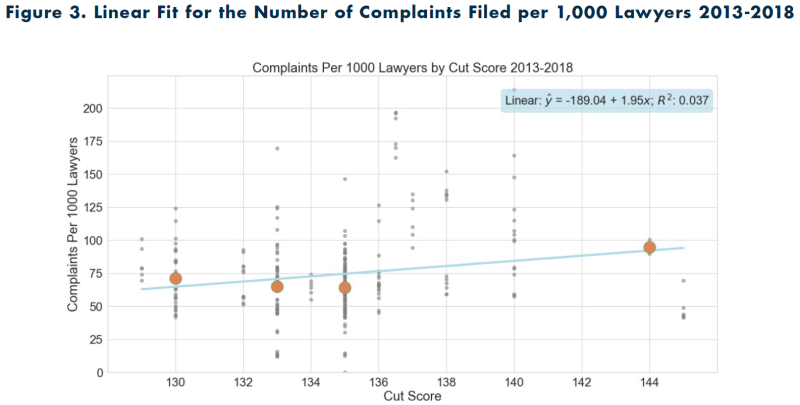 You are incorrect. Lowering standards helps law schools. That's what's driving this. The law school industrial complex. It cares not for the profession, clients, etc. For that matter, the social justice it touts is just a means to an end. Dollars in the pockets of law schools. Follow the money.

And eliminating the bar exam completely will make everyone equal in the legal profession.

Similarly, why have the Bar at all? In fact, why have admission standards to law school? With Zoom you can have 100,000 students in the one class. Bring it on. Power to the people!

"Ultimately, we found no significant relationship between the selection of an exam cut score and these three indicators."