Harvard Will Remain Online in the Spring. Will Other Law Schools Follow?

Karen Sloan (Law.com), Harvard Law Will Remain Online in the Spring. Will Others Follow?: 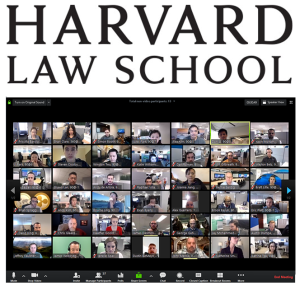 Harvard law students won’t be returning to campus in the spring.

Harvard Law School Dean John Manning announced Tuesday that the school will remain fully remote in the winter and spring semesters due to the COVID-19 pandemic. Harvard is among the first law schools to unveil concrete plans to stay remote after a fully online fall.

“Though we had very much hoped to be able to resume teaching and learning on campus, we have with great disappointment concluded that it is neither prudent nor equitable for us to resume in-person instruction,” Manning wrote in a message to students. “We miss seeing you all in person tremendously. And we understand and regret that today’s decision will land hard with many of you.”

Harvard was also a trailblazer this summer when it announced in June that the fall semester would be fully remote. About 30 other law schools later followed suit, though many waited until July or later to unveil those plans. ...

At Harvard, the law school was joined by four other graduates programs in deciding to remain fully online, while a fifth said it would offer a small number of classes in person for the spring.

On Monday, our school (LMU Loyola) announced the following:

Accordingly, our current plan for Spring 2021 is as follows:
• Most courses, including all 1L courses, will continue to be taught virtually.
Given that on-campus, classroom instruction may not be permitted, or only permitted with such significant constraints that virtual instruction would be more effective, most courses will be taught virtually for the Spring 2021 semester.
• To the extent permitted and feasible, we will offer some upper-level courses on campus, such as courses with smaller enrollments or lawyering skills courses that benefit from specific classrooms (e.g., courtrooms). Any on-campus course component will have an equivalent virtual option. On Monday, October 19, the Spring 2021 Course Schedule will be updated to denote possible rooms for those courses that might have an in-person component, should we be able to offer them on campus instead of virtually. Courses that have the word “ONLINE” in the Room column will be taught virtually.
• If public health authorities permit us to open campus, even on a limited basis, we will prioritize making study space available for students. We had hoped to be able to do so during the fall semester, but as of today, we have not been authorized to reopen campus. Subject to public health protocols, making campus available for studying is a top priority. Offering most of the spring semester’s classes virtually may provide an opportunity to increase study space.
• To the extent possible and consistent with public health protocols, we will use our campus’ outdoor spaces to offer co-curricular enrichment on campus. These could include in-person professor office hours, small discussion groups, student organization meetings, and other small gatherings with all participants wearing masks and physically distanced. Public health protocols will dictate whether and when we can do this, and there will be virtual options for any class-related on-campus opportunities.