Differences in pay between women and men in the same jobs have captured the public’s attention in recent years. However, public interest in and press coverage of salary differences on the basis of gender—or any other ascriptive class—in the learned professions are wanting. Moreover, few studies have spoken directly on the gender pay disparities in the legal academy, despite emerging evidence of it at multiple law schools. In this Article, we use a unique dataset, drawn from the only nationally representative survey to date of tenured law professors in the United States, to track how gender and race are tied to salary outcomes. But we look beyond the raw differences in salary, probing the mechanisms that undergird gendered pay inequities. 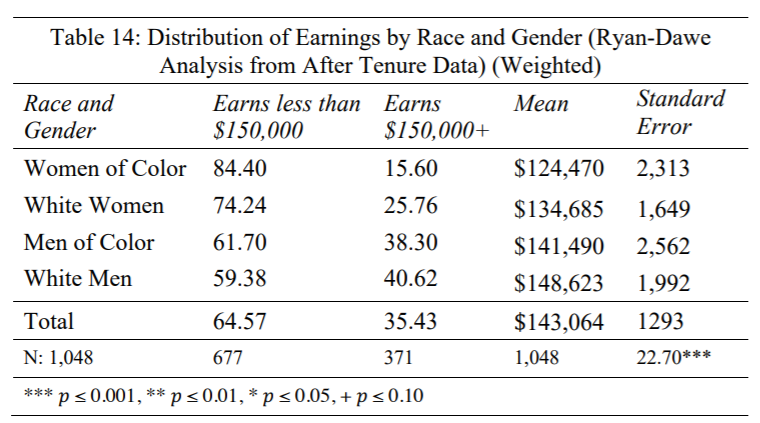 Part I of this Article introduces the concepts of human capital and social capital as important factors underpinning inequalities in outcomes for the legal profession. We then provide an overview of how careers in law—and particularly in the legal academy—are stratified by access to social capital and returns to human capital. In Part II, we introduce the After Tenure survey, from which our data originate. Next, we describe our analytical approach, examining the demography of the legal academy and the legal profession more broadly to discuss the ways in which law professors experience their jobs differently along lines of gender and race. In Part III, we provide evidence of gendered earnings disparities among tenured law professors that is particularly acute for women of color. We conclude by demonstrating how these disparities stem from the differential valuation of human capital.

If, as the data shows, White and non-White men out-earn all women, then we certainly see "gender pay disparities." But the intersectional issue is also screaming out of these stats - being a person of color burden a man FAR LESS than it burdens a woman - and that is not simply a point about gender per se. After all this time, we need to absorb that the barriers faced by women of color are not simply "additive."

I've yet to see a rationale for using "white" and "color" exclusively to group Americans for these types of comparisons. They're about as broad and unscientific as you can get. Specific ethnicities would be far more illuminating. There's very little a woman from South Korea and a woman from Angola, both grouped together under "color", have in common other than gender.

But of course, some people just take the results at face value and generalize from them. I guess that's the point.