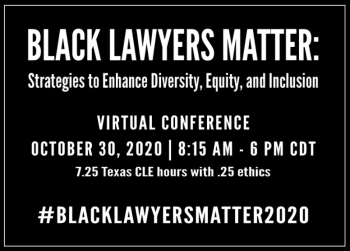 Prior to 1950, if a Black Texas resident wanted to become a lawyer, they had to leave the state and study at a Northern law school or serve as an apprentice under a willing white Texas lawyer in order to become licensed. They had to do this because, at that time, none of the Texas law schools admitted Black students no matter their qualifications.

This year, we celebrate the 70th anniversary of the landmark Supreme Court opinion Sweatt v. Painter, the case that led to the desegregation of Texas law schools. We feel the best way to honor Heman Marion Sweatt is to continue to expand the number of students of color who are ready to be trained and join the ranks of practicing attorneys in Texas — a state that sorely needs to bolster that racial diversity. Co-hosting the Black Lawyers Matter Conference on Oct. 30, a Zoom-style webinar, will allow us to take stock of this challenge and share best practices to solve them. ...

We and the other law schools have much more work to do in diversifying our faculties, staff and student bodies. Without a critical mass, how do we ensure that students of color are not isolated, marginalized or tokenized? Moreover, without sufficient diversity, how do we ensure that all students are learning from a broad range of opinions and cultural experiences imperative for them to become leaders in our profession and our communities?

But it’s not just the law schools; there isn’t a Black judge currently serving on the Texas Supreme Court, and the very first appointment was only in 2001, decades after many other states. The state’s most prominent law firms are largely lacking in diversity when it comes to Black representation as well as other minority groups. The America Lawyer’s Diversity Scorecard reports that the ranks of Black attorneys are small and have remained stagnant for the past decade, despite the efforts firms have put into their diversity programs.

We want Texas to ensure that we have both excellence and diversity in the profession. That’s why we decided to co-convene the “Black Lawyers Matter Conference.”

I am honored to participate in the conference as part of a panel on The LSAT, Socioeconomics and U.S. News & World Report with Robert Ahdieh (Dean, Texas A&M), Robert Morse (U.S. News & World Report), Victor Quintanilla (Indiana) & Kellye Testy (LSAC). We will update the presentations we gave at the 2019 SEALS Conference (more here).