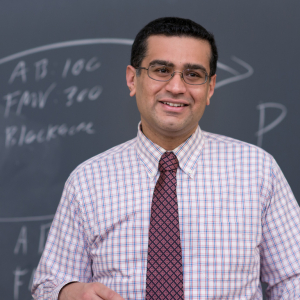 By Andy Grewal’s own accounting, the course of his career has often been marked by luck — “dumb luck,” in his own words.

In fact, the Iowa University College of Law professor, known for his witty Twitter account and often contrarian stances on noteworthy topics like congressional Democrats’ quest for President Trump’s tax returns, didn’t even initially set out to be a lawyer, much less a tax law academic. Grewal wanted to be a journalist.

He initially applied to Northwestern University’s Medill School of Journalism, but was rejected. “I was so heartbroken that I just gave up journalism entirely,” he told Tax Notes.

Instead, Grewal took up law. But after his first year of law school, he decided he didn’t like any of those first-year courses all that much, so he just decided — without having taken any tax classes — that he would specialize in whatever area seemed completely different from everything else.

“Somehow it worked out,” he said.

Grewal’s additional interest in the then-nascent field of administrative law turned out to be prescient. While earning his LLM in tax at Georgetown University Law Center, from which he graduated in 2006, he took classes on administrative law and statutory interpretation, and it was during that time that he said the two subjects were fused together in his mind. ...

For the next few years, he worked in the private sector in Washington — first at Mayer Brown, and then at Skadden, Arps, Slate, Meagher & Flom LLP — but he continued to write, even having a few articles published in Tax Notes.

In early 2009, Grewal decided to apply for a teaching position at Arizona State University. At the same time, in the wake of the financial crisis, Skadden was offering to pay its associates to “disappear for a year.”

“I got really lucky,” Grewal said. “I got paid to leave when I was planning to leave anyway.”

In another stroke of good fortune, Grewal’s early scholarly interest in the obscure issue of congressional tax oversight authority took on real salience once Trump was elected in 2016.

A Vox article showed that almost a dozen legal experts were nearly unanimous in affirming that the House Ways and Means Committee’s legal authority to subpoena Trump’s tax returns was absolute and justified. One respondent even said that anyone who argues otherwise “is either a partisan hack or contemptuous of the rule of law.” But then there was Andy. ...

University of Chicago Law School professor Daniel Hemel — who acknowledged that he disagrees with Grewal on so many topics that he can’t decide which issue he disagrees with him most on — said that he actually agrees that a legitimate legislative purpose is needed to obtain Trump’s tax returns, but he believes Congress has that justification already.

A big part of that disagreement, and many others he has with Grewal, hinges on a fundamental disagreement over how big of a threat the Trump administration is to American democracy and constitutional order, Hemel continued. “My view is, these are not normal times and that we have some obligation in scholarship and working to address the Trump threat. And Andy has a different intuition on that,” Hemel said.

As he did with Congress and tax returns, Grewal got a head start in the field of tax and administrative law.

His early scholarship in administrative law made an impression on the “champion of anti-tax-exceptionalism” herself, University of Minnesota Law School professor Kristin Hickman. “I like scholarship that is interesting and makes a new point, but also that has some real-world connection to it,” Hickman told Tax Notes.

According to Hickman, Grewal’s 2006 article, “Substance Over Form? Phantom Regulations and the Internal Revenue Code,” which critiqued the practice of deferring to judicial opinion in the absence of Treasury regulations, was “really novel” and was later cited by the Tax Court. ...

In the years since Mayo, however, scholarship in tax administrative law has grown exponentially, and Grewal has contributed greatly to that development, Hickman said. Grewal has written several academic articles in that area, where he often falls on the anti-tax-exceptionalist side, as well as offered comments on others’ work. ...

Grewal says he doesn’t mind his contrarian reputation. “It makes academia more fun,” he said. “If you’re an academic, the most boring thing in the world is everyone in the world telling you you’re right.”

That habit of taking nuanced minority positions on issues has endeared Grewal to at least some of his colleagues.

“Andy is someone who has the gift of being able to disagree without being disagreeable,” Hemel said. “Academia can often become an echo chamber, but in tax and administrative law at least, Andy has made it his mission to ensure that it’s not.”

Hemel recalled that the ancient Jewish Sanhedrin court had a rule that to sentence someone to death, the verdict could not be unanimous. It was considered suspicious if everyone uniformly agreed, because unless someone voices the best counterargument, “then you can never really be confident in your own view,” he explained.

“The stakes are generally lower than death here,” Hemel continued. “[But] I think Andy makes it his mission to offer the best counterargument on a wide range of issues. And that’s extraordinarily valuable.”

Hickman also found Grewal’s unique positions appealing. “He’s a bit irreverent, as you’d know if you’ve read his Twitter feed, but he’s also very charming and a lot of fun. . . . If you’ve gotta get stuck next to somebody at a three-hour dinner, Andy would be at the top of the list of people I’d want to get stuck next to,” she said.