Welcome To The ‘Turbulent Twenties’

Almost three decades ago, one of us, Jack Goldstone, published a simple model to determine a country’s vulnerability to political crisis. The model was based on how population changes shifted state, elite and popular behavior. Goldstone argued that, according to this Demographic-Structural Theory, in the 21st century, America was likely to get a populist, America-first leader who would sow a whirlwind of conflict.

Then ten years ago, the other of us, Peter Turchin, applied Goldstone’s model to U.S. history, using current data. What emerged was alarming: The U.S. was heading toward the highest level of vulnerability to political crisis seen in this country in over a hundred years. Even before Trump was elected, Turchin published his prediction that the U.S. was headed for the “Turbulent Twenties,” forecasting a period of growing instability in the United States and western Europe.

Given the Black Lives Matter protests and cascading clashes between competing armed factions in cities across the United States, from Portland, Oregon to Kenosha, Wisconsin, we are already well on our way there. But worse likely lies ahead.

Our model is based on the fact that across history, what creates the risk of political instability is the behavior of elites, who all too often react to long-term increases in population by committing three cardinal sins.

First, faced with a surge of labor that dampens growth in wages and productivity, elites seek to take a larger portion of economic gains for themselves, driving up inequality.

Second, facing greater competition for elite wealth and status, they tighten up the path to mobility to favor themselves and their progeny. For example, in an increasingly meritocratic society, elites could keep places at top universities limited and raise the entry requirements and costs in ways that favor the children of those who had already succeeded.

Third, anxious to hold on to their rising fortunes, they do all they can to resist taxation of their wealth and profits, even if that means starving the government of needed revenues, leading to decaying infrastructure, declining public services and fast-rising government debts.

Such selfish elites lead the way to revolutions. They create simmering conditions of greater inequality and declining effectiveness of, and respect for, government. But their actions alone are not sufficient. Urbanization and greater education are needed to create concentrations of aware and organized groups in the populace who can mobilize and act for change. ...

In applying our model to the U.S., we tracked a number of indicators of popular well-being, inequality and political polarization, all the way from 1800 to the present. These included the ratio of median workers’ wages to GDP per capita, life expectancy, the number of new millionaires and their influence on politics, the degree of strict party-line voting in Congress, and the incidence of deadly riots, terrorism and political assassinations. We found that all of these indicators pointed to two broad cycles in U.S. history. ...

Writing in the journal Nature in 2010, we pointed out that such trends were a reliable indicator of looming political instability and that they “look set to peak in the years around 2020.” In Ages of Discord, published early in 2016, we showed that America’s “political stress indicator” had turned up sharply in recent years and was on track to send us into the “Turbulent Twenties.” 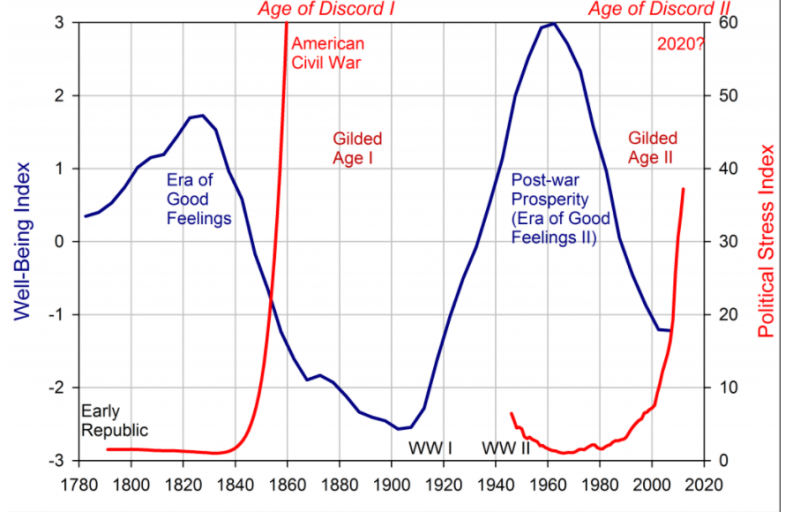 This year, the COVID-19 pandemic and the death of George Floyd at the hands of the Minneapolis police have delivered a double-barreled crisis to U.S. politics. America has reacted with a nationwide, months-long series of urban protests. But this explosion of protest is not just the result of this year’s events. The U.S. has weathered epidemics and racial protests before and produced legislation that made the country better as a result. What is different this decade is that these events are occurring at a time of extreme political polarization, after decades of falling worker’s share in national income, and with entrenched elite opposition to increased spending on public services. These trends have crippled the U.S. government’s ability to mount an effective response to the pandemic, hampered our ability to deliver an inclusive economic relief policy and exacerbated the tensions over racial injustice that boiled over in response to the video of Floyd’s death.

Is the U.S. likely headed for still greater protests and violence? In a word, yes. Inequality and polarization have not been this high since the nineteenth century. Democrats are certain that if Donald Trump is re-elected, American democracy will not survive. Republicans are equally certain that if Trump loses, radical socialists will seize the wealth of elites and distribute it to underserving poor and minorities, forever destroying the economy of the United States. Both sides are also convinced that the other side intends to change the democratic “rules of the game” in ways that will make it impossible for them to compete effectively in future elections. In such conditions, elections are not merely contests over policy preferences; they become existential battles for the future of the nation. Whichever party loses is likely to view the results as rigged and the outcome as intolerable. ...

This has already been, and will continue to be, a violent year in America. We need to brace for post-election violence and prepare bipartisan methods to ensure that the election outcome will be widely regarded as fair and legitimate. It will take heroic efforts to rebuild the political center, to join businesses and workers in partnership and consensus, and to restore fairness in both taxation and public spending. Only if all sides can again recover a stake in our government, no matter which party controls it, can we avoid sliding into a crisis that will undermine our Constitution and pit Americans against each other in a way we have not seen for generations.

If you are tired of jobs going overseas, don't shop at Walmart. Most everything is made in China. But Walmart is the most popular store in this country. This is our consumer choice and people wanted cheap goods so that is what we have. If we decided to consume less, we would be able to afford American made items.

I take no issue with the underlying science/data, nor with the conclusion of more instability to come. However, the application of those conclusions to our current presidential election is deeply flawed. If this was peered reviewed it was done in an elite bubble. Trump supporters are not ‘Republicans’ and they do not want to protect the elite from democratic socialism. Trump supporters are fed up with private industry elites who have shipped our nation’s once mighty industries and jobs overseas to countries that now wish us ill, and with intrenched government elites (democrats and republicans) that enabled this behavior in exchange for a few pieces of gold.

Rebuilding this Country’s industrial muscle is the surest way to provide opportunity and economic hope for all. It’s the most inclusive message out there!

The democratic message right now, as Trump supporters see it, is one that promises more government elites who will tear down the few remaining industry elites by imposing more taxation, reparations, and social justice extortion. The democratic message doesn’t include any actions that would support a brighter economic tomorrow for all – but rather a short-term improvement for some while we all fall down together. It’s the promise of a fatal self-inflicted national wound in the form of a grab at the meager and dwindling crumbs that our current ‘manufacture nothing’ economy produces. It’s a recipe for disaster.

If your message is still based on the old concept of ‘democrats’ and ‘republicans,’ then you are not keeping up. I would go so far as to say that Trump supporters and peaceful protestor/rioters share the same concern about how ‘the system created by elites has F’d us.’ The reactions to that concern though are drastically different. Trump supporters want to create a strong national economy based on real tangible goods production that will benefit all, while the peaceful protestors/rioters want to loot what’s left and go out with a bang! These are not democrats or republicans – they’ve left that behind.

If you want to identify the parties who are constantly stoking the fires of instability you need look no further than old school media and new school social media (and recent national polling showing approximately 85% of Americans do not trust the media).

Don't please get too wound up - it is a model

Well, maybe. But there's an additional factor you have not considered, and that is median age. America's median age is approaching 40. Older people are simply not as violent, nor as willing to put up with violence, as youngsters.

This has been demonstrated this year, where the worst you see is commercial fireworks and Molotovs. There have been no explosions, as there were in 1968, when the median age was 15 years younger.

A population's capacity for violence wanes with age. So, while we may be more violent than recent memory admits, we won't be as violent as most historical events have been. There won't be a civil war, because the median population just doesn't have the stomach for it, and there aren't enough youngsters on a per capita basis to sustain it.

You do realize that Trump decreased wealth inequality by focusing on lower-middle and middle class jobs, creating a labor shortage, and it is the Democrat party that is the party of the “elites,” seeking to capture public funds to redistribute not to the poor but to multi-national corporations (with kickbacks to politicians), foreign countries (with kickbacks to politicians), upper middle class Democrat constituencies among non-economically productive Academia and government sectors, etc., right.

And the GOP is right along with the - the “resistance” to Trump is the resistance of the elites and poorer people they have on the payroll.

"Republicans are equally certain that if Trump loses, radical socialists will seize the wealth of elites and distribute it to underserving poor and minorities, forever destroying the economy of the United States."

While this may be somewhat accurate in hte past, it is at risk of being just an old stereotype today. Ity would seem the democrats are by far the more elite oriented party and the republicans more and more attached to the interests of working, middle and lower classes. Example? Wall Street is nearly 100% democrat. Maybe democrats are easier to buy?

no, the elite deep state subversives driving all this sense that their goal is in reach and are pushing harder.

while appreciating the analysis, its kind of rich to include funding of the government. With the welfare/warfare state, "funding the government" includes putting military forces in over 100 countries, and the government pensions are, lets just call it as it is, straight-out doomed.

If full funding of government retirement and benefits is a necessary prerequisit to civil peace, well, buckle-up cowboy.