Following up on my previous post, 2021 U.S. News College Rankings:  Chronicle of Higher Education, The Rules of the Game: 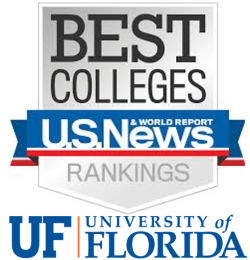 For Bernie Machen, it started before he’d been hired. The University of Florida’s Board of Trustees was looking for a president who would commit to moving the institution up the U.S. News and World Report’s college rankings.

“The thing that would bring us all together was to be able to bring the university, that we all went to and loved, to the top 10,” said Manny Fernandez, a tech-company executive who chaired the 2003 presidential search. At the time, the University of Florida ranked No. 52 over all and No. 17 among public universities. The board wanted to see the Gators among the top 10 public institutions.

Fernandez was tired of the reactions he would get when he divulged his alma mater at parties. Either people wouldn’t have really heard of the University of Florida — “or somebody would say, ‘Wasn’t that voted No. 1 party school by Playboy?’” Fernandez was offended. “I believe I am who I am today because I went to this school,” he said. “We needed to change the external perception of the University of Florida.” U.S. News was one very effective way to do that.

Machen, too, believed in the goal. While many people inside and outside of higher education today argue that a high ranking doesn’t necessarily translate to quality, Machen believed in many of U.S. News’s metrics. “I feel that many of them are relevant and worth shooting for,” he said, “and I think improving on those variables made us a better institution.”

He became the president of the University of Florida in January 2004. He would not see the Gators reach his goal; he retired in 2014, when UF was No. 14 among public universities. But he set the ball for the next administration’s spike. The Gators would break into the top 10 in 2017. On Monday, in U.S. News’ latest rankings, they ranked sixth — on the verge of reaching their latest goal: top five.

In his efforts to cement his university’s place in the rankings, Machen reached far beyond Gainesville. He worked with then-Governor Rick Scott to get the state to pass a funding scheme called Preeminence, which rewarded public colleges that did best on some of the metrics deemed important by U.S. News. For the University of Florida, Preeminence created the kind of virtuous circle that such money often begets. It helped the university ascend the rankings, which in turn brought in more applicants, more approval from lawmakers, and more money, which administrators could use to keep climbing.

In return, Machen supported Scott’s launch of performance-based funding for Florida universities — a system that also advantaged the flagship. But the partial alignment of state purse strings with U.S. News metrics has come at a cost. Critics say these developments have driven an even bigger wedge between the state’s four-year colleges, making richer institutions richer, and depriving less-resourced institutions of much-needed funds.

Recently lawmakers seem to have turned away from Preeminence, which has received no state allocation in the last two years. But the statute is still in Florida law, and universities are still scored on its metrics. The program helped set the universities up for where they are today, amid the early days of a crisis that could take a big bite out of higher education. And the horse-trading between Machen and Scott also stands as a striking example of the outsized power that the U.S. News college rankings have come to hold in higher education.

Machen understood right away that to climb the U.S. News rankings, as he had been hired to do, he would need more money. In particular, he would need more money per student. He and his team saw that one big problem was the student-to-faculty ratio, an important part of the formula that would be expensive to fix. So he lobbied the Board of Trustees to let him freeze enrollment and raise tuition. It took some effort, he said: “The board is a political body. They hear from parents who want to know why their kid didn’t get in.” But he succeeded.

Yet after nine years at Florida, he still hadn’t quite made it into the top 10, and he was getting tired. “We had lived through the recession. It was pretty tough,” he said. “I was a little bit burned out. I said, ‘I think I’ll just step down and let someone else take over.’”

But Scott had other ideas. Machen recalled that, as he was preparing to retire, Scott said to him: “I’ll tell you what, what would it take for you to stay a couple more years?”

That something turned out to be the Preeminence program, a piece of legislation that gives Florida’s public universities extra funding if they are able to meet more than a dozen metrics that Machen helped write. Several of these measures would match the formula that U.S. News uses to rank colleges, and one was actually for appearing on “well-known and highly respected national public university rankings.” “That gave me another shot at trying to get quicker into the top 10,” Machen said.

UF’s funds went to hiring not only more faculty members, but stars in their fields, people who would sharpen the research attributable to the University of Florida, bolster the university’s national reputation, and bring in big, prestigious federal research grants. ...

Seven years on, the game is still played according to the rules of performance-based funding, and it’s reshaped Florida’s public universities. ...

Every year since 2017, when it first created such a list, U.S. News and World Report has called Florida the best state in the nation for higher education. It’s a point of pride for politicians. ...

Many former and current university leaders have more mixed feelings. Like many other officials The Chronicle interviewed, Dale Whittaker said he’s “a fan of performance funding,” but then immediately launched into his major criticisms of the system. After holding administrative positions at Purdue University and the University of Central Florida, Whittaker was briefly the University of Central Florida’s president before resigning in the wake of findings that the university had spent operational funds on construction, in violation of state rules, prior to his presidency. He now works as a higher-ed consultant.

Whittaker said the system “increases homogenization” of the universities. In addition, because institutions that are already doing well get more money, “the winners win faster and faster,” he said. This was especially true under rules in which the three lowest-scoring universities each year would not get a part of their state allocation. That money would go to the top three highest-scoring universities, instead. For those that ended up at the bottom of the list: “It’s awful hard to get better when you’re having money taken out of your pocket.” ...

Ask longtime University of Florida faculty members what’s different now about the campus community, compared to 10 or 15 years ago, and they’ll say: the students. It’s a common joke among alumni: I wouldn’t get in if I applied now. As Florida has climbed the rankings, it’s gotten more selective. Just in recent years, the GPA of the average admit rose from 4.3, in 2014, to 4.45, in 2019. The average admitted student’s SAT score went from the 89th percentile to the 94th. ...

Machen retired in December 2014. He and his wife stayed in Gainesville, in the house they bought just a couple of years into his presidency. The provost called him when the University of Florida finally broke into the U.S. News’s list of top-10 public universities, in September 2017. “You spent 10 years of your life working on something and seeing that it actually happened: It’s satisfying. Still is,” he said. “I wasn’t overwhelmed, but I was very pleased.” By then he had no doubt that they were going to make it.

Under President W. Kent Fuchs, the University of Florida began seeking to enter U.S. News’s top-five public universities list. During an interview in February, long before the latest rankings came out, Machen said he didn’t agree with the goal. “I think top 10 is plenty,” he said. “If we naturally rise above that, so be it. I don’t see any real value in trying to be No. 1, for example.”

“I haven’t seen it yet,” he said. “I hope we don’t become too focused on rankings.”