Inside Higher Ed, Higher Ed Gave Five Times As Much To Biden Than Trump: 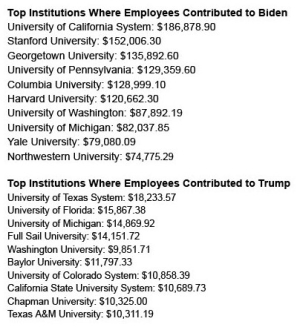 Though the nation finds itself deeply divided, it’s clear whom employees at the nation’s higher education institutions are supporting financially in the presidential race.

According to federal elections records, those who listed their employer as a college or university have given Democratic candidate Joe Biden about $4.9 million in contributions, more than five times as much as the $890,000, including donations from for-profit college executives, that they have given President Trump.

The contributions to Biden have come widely, from about 8,800 donors, compared to the 2,800 higher education employees who want to see another four years of a Trump administration.

Even more pronounced are whom those college or university employees, who listed their occupation either as professor, instructor or teacher, are giving to. The educators have given about $2.7 million to Biden, according to Federal Election Commission records in the election cycle beginning in January 2019 -- or seven times as much as the $353,00 they have to Trump. ...

I wonder how many of the Trump contributions came from employees of Trump University.

These professor drawn to Biden's sharp, incisive mind, as well as his ability to respond eloquently and extemporally to questions on a wide array of topics. We've perhaps never had a presidential candidate this brilliant. Watch that here.
https://www.youtube.com/watch?v=pTtABxyqIUk

Yeah, no kidding. Academia has been captured. But the war is not yet won by the marxists. Stay tuned.

If they're at public universities, and have tenure, then that's de facto a transfer of taxpayer money to the Biden campaign. So much for the party that wants to get money out of politics.