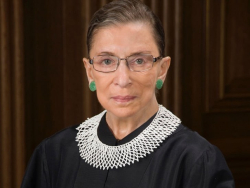 Penn Law deleted its public statement on the death of Ruth Bader Ginsburg after students lambasted it for including a quote from controversial law professor Amy Wax.

Ginsburg, the second woman to sit on the Supreme Court and an advocate for women's rights, died of pancreatic cancer on Sept. 18 at age 87. The statement, posted to the law school’s Facebook page on Sept. 23 at 8:51 a.m., quickly garnered recoil from Penn Law students and graduates for including an excerpt from Wax's book review [Notorious: What Does Ruth Bader Ginsburg Mean For Women?] — published in Claremont Review of Book's Winter 2020 edition — on Jane Sherron De Hart's "Ruth Bader Ginsburg: A Life."

Let us now praise Ruth Bader Ginsburg. There is ample grist available for hagiography: in the year 2018 alone, a slew of glowing retrospectives celebrated Ginsburg’s status as a feminist heroine and champion of women’s rights. There was Ruth Bader Ginsburg, a biography by U.C. Santa Barbara history professor Jane Sherron De Hart. There was a Netflix documentary about Ginsburg’s career, simply entitled RBG. And the list goes on. But these accounts paid a price for their relentlessly laudatory tone. Missing was any serious appraisal of her professional legacy, its place within larger judicial and legislative debates, and its implications for the shifting and often conflicting roles of women in modern society.

Penn Law students noticed the statement had been deleted around 4:40 p.m. later that day.

While Wax applauds Ginsburg's professional legacy in the selected quote featured in Penn Law's statement, the book review itself casts Ginsburg's admirable work ethic as an outlier for women. Wax wrote in the book review "it is rare that women, regardless of their profession, ability, or training, are willing to work long hours routinely and consistently" as Ginsburg had done.

If you're a conservative or libertarian woman, or from a minority group, watch out. The Left will hate you, and with more venom, than they do the average straight, white male.

OK, so the fact that law students don’t like a professor and her political views clearly oughtn’t stop the institution from promoting the professor’s work. That said, whatever functionary thought that Wax’s tongue-in-cheek, ironic “Let us now praise RBG” was an appropriate sentiment to include in honoring the Justice’s legacy needs some reading lessons!