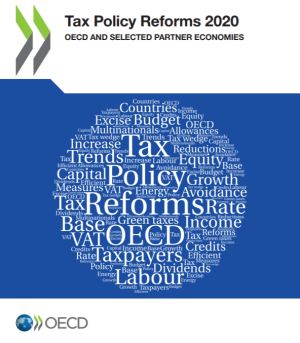 This is the fifth edition of Tax Policy Reforms: OECD and Selected Partner Economies, an annual publication that provides comparative information on tax reforms across countries and tracks tax policy developments over time. The report covers the latest tax policy reforms in all OECD countries, as well as in Argentina, China, Indonesia and South Africa. In addition to providing an overview of the tax reforms adopted before the COVID-19 crisis, the report includes a Special Feature that takes stock of the tax and broader fiscal measures introduced by countries in response to the crisis from the beginning of the virus outbreak up to mid-June 2020.

Executive Summary
Tax Policy Reforms: OECD and Selected Partner Economies is an annual publication that provides comparative information on tax reforms across countries. It tracks tax policy developments over time and gives an overview of the latest tax reform trends. This year’s edition focuses on the tax reforms that came into force or were due to come into force in the second half of 2019 and 2020. However, given the significant packages of measures that were introduced in the first half of 2020 in response to the COVID19 crisis, the report also includes a Special Feature on “Tax and Fiscal Policy Responses to the COVID19 Crisis”. This Special Feature takes stock of the tax and broader fiscal measures introduced by countries from the beginning of the virus outbreak up to mid-June 2020, largely based on countries’ updates to the database compiled by the OECD on tax and fiscal policy responses to the crisis.

This year also marks the first time that China is included in the publication. This year’s report covers 40 countries including all OECD countries (with the exception of Colombia, 2 which became a member of the OECD after the primary data collection exercise had been completed), as well as Argentina, China, Indonesia and South Africa. The intention is to continue expanding the coverage of the report to additional G20 countries.

The Special Feature on “Tax and Fiscal Policy Responses to the COVID-19 Crisis” shows that countries have taken swift and significant policy action in response to the crisis. While the size of fiscal packages has varied across countries, most have been significant, and some countries have taken unprecedented action. The initial measures introduced by countries focused on keeping businesses and households afloat, mainly through liquidity support for businesses, job retention schemes, and income support to households. As the crisis has continued, many countries have expanded their initial response packages. Some countries have also decided to adjust some of their initial measures or to wind back or delay tax reforms that were due to come into force. The most recent measures and discussions suggest that the recovery phase will be supported by expansionary fiscal policy in many countries, including through measures to support investment and consumption and ongoing support for households and businesses.

The report contains four chapters. Chapter 1 discusses the macroeconomic background before the COVID-19 crisis, and provides a brief overview of the impact of the crisis on the global economy. Chapter 2 presents the latest trends in tax revenues and tax mixes. Chapter 3 gives an overview of the tax reforms entering into force or due to enter into force in the second half of 2019 and 2020. Finally, Chapter 4 provides an overview of the measures adopted by countries so far in response to the COVID-19 crisis, in the Special Feature on “Tax and Fiscal Policy Responses to the COVID-19 Crisis”. The Special Feature in this year’s report focuses mainly on the emergency measures announced in response to the crisis. However, the significant increases in government expenditure and the expected dramatic decline in tax revenues in the aftermath of widespread economic lockdowns are likely to present a large range of medium to longer-term fiscal challenges. In responding to these challenges, tax policy will be one of the key instruments to be relied upon by policy makers. Against this backdrop, ongoing developments in tax policy in this rapidly evolving environment will be monitored and assessed in future editions of this report.