Their law clerks do a lot better. After a year of service at the court, they are routinely offered signing bonuses of $400,000 from law firms, on top of healthy salaries of more than $200,000.

What are the firms paying for? In a profession obsessed with shiny credentials, a Supreme Court clerkship glitters. Hiring former clerks burnishes the firms’ prestige, making them more attractive to clients.

Still, the former clerks are typically young lawyers just a couple of years out of law school, and the bonuses have a second and more problematic element, said Stephen Gillers, an expert on legal ethics at New York University. “They’re buying something else: a kind of inside information about how the court is thinking and how individual justices might be thinking,” he said.

A new study in Political Research Quarterly suggests that the ban has not been completely successful [Ryan Black (Michigan State) & Ryan Owens (Wisconsin), The Influence of Personalized Knowledge at the Supreme Court: How (Some) Former Law Clerks Have the Inside Track.].

It examined about 3,600 Supreme Court arguments over two decades, controlling for many factors, and found that former clerks making arguments before the court were no more likely to persuade most justices than other lawyers. Another study last year came to a similar conclusion [Michael Nelson (Penn State) & Lee Epstein (Washington University), Lawyers With More Experience Obtain Better Outcomes].

But the new study identified one striking exception. Former clerks were 16 percentage points more likely to attract the votes of the justice for whom they had worked. The relationship increased their chances of obtaining their former boss’s vote to about 73 percent, from about 57 percent. 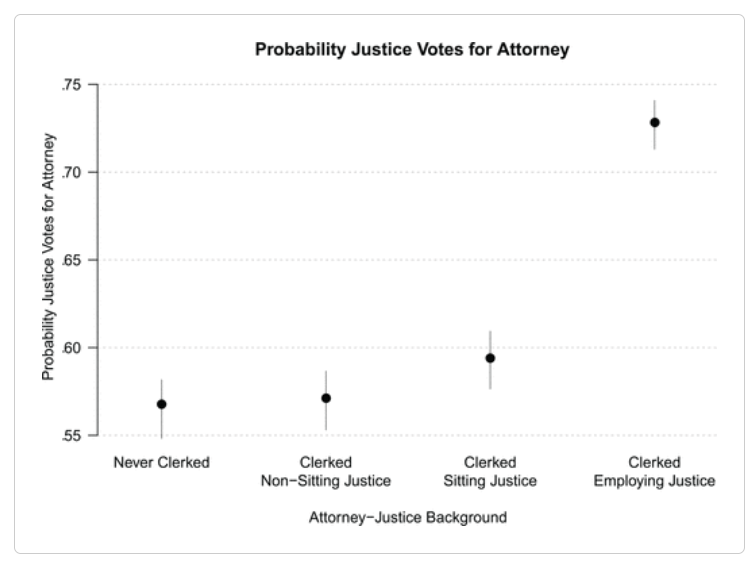 "Keep burnishing that legal knowledge of yours!"

Two decisions out of literally hundreds going back decades in no way contradicts my point that it rarely if every happens.

What is it about trolls and autism?

Clerks have an unusually keen understanding of the jurisprudential thinking of the judge they work for (and on the High Court the other justices as well, even if to a lesser extent). Accordingly, he or she can tailor the arguments to appeal to the judge's jurisprudence. Nothing nefarious about that.

MM is apparently ignorant of Little Sisters of the Poor Saints Peter and Paul Home v. Pennsylvania and Our Lady of Guadalupe School v. Morrissey-Berru, both of which came down this summer, to name just two recent cases where liberal justices sided with the conservative majority. Keep burnishing that legal knowledge of yours!

I think we know that the "influence" referenced here is most likely conservative justices being influenced to side with their liberal colleagues. Because that sort of thing rarely if ever happens in the reverse direction.

How is it surprising that former clerks are likely to “attract” the votes of their employing justices? Justice are likely to hire clerks who reflect their views.

The answer is to bar from Supreme Court practice any law firm which employs anyone who clerked for a justice currently sitting on the Court. End of story.

Seems to me that this will make employment of such individuals much less inviting.

The reason for the bonuses is thus: a few years ago Reuters did a deep dive into ten years' of SCOTUS litigation. Of the tens of thousands of appeals to the court, about five dozen lawyers - fewer than 1% of those hoping to bring cases - accounted for nearly HALF of the cases heard.

Wouldn't you know it? Almost every single one of those five dozen lawyers were former SCOTUS clerks, and most of the rest formerly held senior positions in the SG's office. Nearly all were male, nearly all were white, nearly all represented corporations.

It's a closed loop.

Correlation is not causation. More likely in my opinion is that Justices choose law clerks who have a similar judicial philosophy, which leads to clerks working on cases that they are likely to agree on.

Too bad there's probably no way to test for another issue—that of after-the-fact payoffs. Clerks hoping to get one of these lucrative starting salaries might be inclined to tweak what they write for their justice to find favor with a future employer. Even a slight change in wording could make a huge difference in the effect.