In recent years, summer has brought a season of fear to California, with ever-worsening wildfires closing in. But this year felt different. The hopelessness of the pattern was now clear, and the pandemic had already uprooted so many Americans. Relocation no longer seemed like such a distant prospect. Like the subjects of my reporting, climate change had found me, its indiscriminate forces erasing all semblance of normalcy. Suddenly I had to ask myself the very question I’d been asking others: Was it time to move?

I am far from the only American facing such questions. This summer has seen more fires, more heat, more storms — all of it making life increasingly untenable in larger areas of the nation. Already, droughts regularly threaten food crops across the West, while destructive floods inundate towns and fields from the Dakotas to Maryland, collapsing dams in Michigan and raising the shorelines of the Great Lakes. Rising seas and increasingly violent hurricanes are making thousands of miles of American shoreline nearly uninhabitable. As California burned, Hurricane Laura pounded the Louisiana coast with 150-mile-an-hour winds, killing at least 25 people; it was the 12th named storm to form by that point in 2020, another record. Phoenix, meanwhile, endured 53 days of 110-degree heat — 20 more days than the previous record.

For years, Americans have avoided confronting these changes in their own backyards. The decisions we make about where to live are distorted not just by politics that play down climate risks, but also by expensive subsidies and incentives aimed at defying nature. In much of the developing world, vulnerable people will attempt to flee the emerging perils of global warming, seeking cooler temperatures, more fresh water and safety. But here in the United States, people have largely gravitated toward environmental danger, building along coastlines from New Jersey to Florida and settling across the cloudless deserts of the Southwest.

I wanted to know if this was beginning to change. Might Americans finally be waking up to how climate is about to transform their lives? And if so — if a great domestic relocation might be in the offing — was it possible to project where we might go? To answer these questions, I interviewed more than four dozen experts: economists and demographers, climate scientists and insurance executives, architects and urban planners, and I mapped out the danger zones that will close in on Americans over the next 30 years. The maps for the first time combined exclusive climate data from the Rhodium Group, an independent data-analytics firm; wildfire projections modeled by United States Forest Service researchers and others; and data about America’s shifting climate niches, an evolution of work first published by The Proceedings of the National Academy of Sciences last spring. (See a detailed analysis of the maps.) 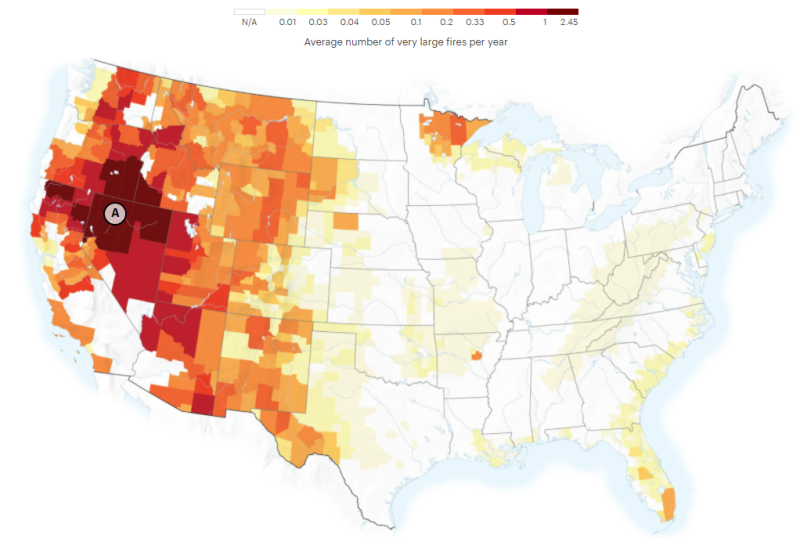 Across the United States, some 162 million people — nearly one in two — will most likely experience a decline in the quality of their environment, namely more heat and less water. For 93 million of them, the changes could be particularly severe, and by 2070, our analysis suggests, if carbon emissions rise at extreme levels, at least four million Americans could find themselves living at the fringe, in places decidedly outside the ideal niche for human life. The cost of resisting the new climate reality is mounting. Florida officials have already acknowledged that defending some roadways against the sea will be unaffordable. And the nation’s federal flood-insurance program is for the first time requiring that some of its payouts be used to retreat from climate threats across the country. It will soon prove too expensive to maintain the status quo.

Then what? One influential 2018 study, published in The Journal of the Association of Environmental and Resource Economists, suggests that one in 12 Americans in the Southern half of the country will move toward California, the Mountain West or the Northwest over the next 45 years because of climate influences alone. Such a shift in population is likely to increase poverty and widen the gulf between the rich and the poor. It will accelerate rapid, perhaps chaotic, urbanization of cities ill-equipped for the burden, testing their capacity to provide basic services and amplifying existing inequities. It will eat away at prosperity, dealing repeated economic blows to coastal, rural and Southern regions, which could in turn push entire communities to the brink of collapse. This process has already begun in rural Louisiana and coastal Georgia, where low-income and Black and Indigenous communities face environmental change on top of poor health and extreme poverty. Mobility itself, global-migration experts point out, is often a reflection of relative wealth, and as some move, many others will be left behind. Those who stay risk becoming trapped as the land and the society around them ceases to offer any more support.

There are signs that the message is breaking through. Half of Americans now rank climate as a top political priority, up from roughly one-third in 2016, and three out of four now describe climate change as either “a crisis” or “a major problem.” This year, Democratic caucusgoers in Iowa, where tens of thousands of acres of farmland flooded in 2019, ranked climate second only to health care as an issue. A poll by researchers at Yale and George Mason Universities found that even Republicans’ views are shifting: One in three now think climate change should be declared a national emergency.

Policymakers, having left America unprepared for what’s next, now face brutal choices about which communities to save — often at exorbitant costs — and which to sacrifice. Their decisions will almost inevitably make the nation more divided, with those worst off relegated to a nightmare future in which they are left to fend for themselves. Nor will these disruptions wait for the worst environmental changes to occur. The wave begins when individual perception of risk starts to shift, when the environmental threat reaches past the least fortunate and rattles the physical and financial security of broader, wealthier parts of the population. It begins when even places like California’s suburbs are no longer safe.

Once you accept that climate change is fast making large parts of the United States nearly uninhabitable, the future looks like this: With time, the bottom half of the country grows inhospitable, dangerous and hot. Something like a tenth of the people who live in the South and the Southwest — from South Carolina to Alabama to Texas to Southern California — decide to move north in search of a better economy and a more temperate environment. Those who stay behind are disproportionately poor and elderly.

In these places, heat alone will cause as many as 80 additional deaths per 100,000 people — the nation’s opioid crisis, by comparison, produces 15 additional deaths per 100,000. The most affected people, meanwhile, will pay 20 percent more for energy, and their crops will yield half as much food or in some cases virtually none at all. That collective burden will drag down regional incomes by roughly 10 percent, amounting to one of the largest transfers of wealth in American history, as people who live farther north will benefit from that change and see their fortunes rise.