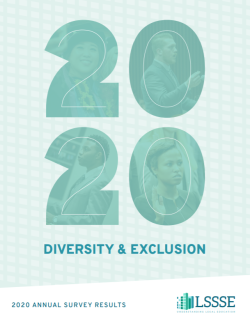 Newly-released data by the Law School Survey of Student Engagement (LSSSE) provides a compelling look at law student perceptions and experiences along various measures of diversity and inclusion.  Data from this Report, Diversity & Exclusion, draw from a new Diversity and Inclusiveness Module that LSSSE began offering this year.  Of the 68 law schools that participated in the LSSSE survey in 2020, 28 law schools opted to administer the additional Diversity and Inclusiveness Module, which resulted in over 5,200 student participants.

“While many law schools have focused on improving diversity, this report reveals that we must not lose sight of inclusion,” said Meera E. Deo, Director of LSSSE.   “Many of our most vulnerable students—including those who are marginalized based on their race/ethnicity, gender, sexual orientation, debt load, and first-gen status—are telling us that we need to do more to show we value them, to prove they belong, to make them comfortable in legal education and the legal profession.”

Noteworthy findings from the report include:
Institutional Support