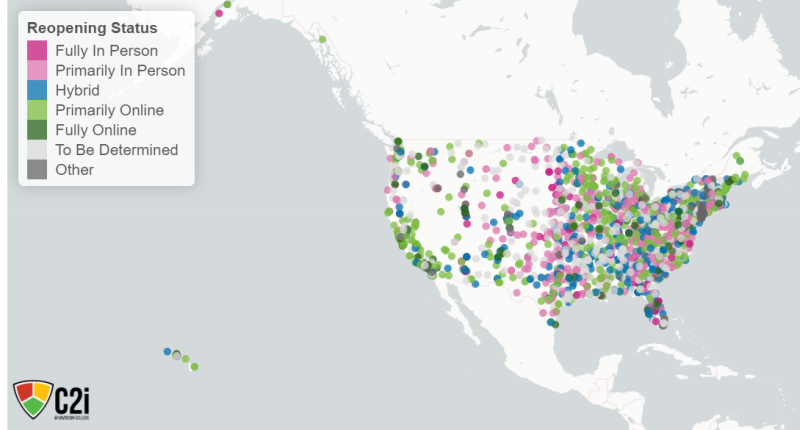 Colleges and universities looked at several factors when determining whether to reopen their campuses to students for the fall, including local COVID-19 case numbers, campuses' ability to physically distance students and what students said they wanted in surveys.

But another factor seems to have played a major role in the decision-making process, one that is not being touted in news releases or letters to the community: colleges' decisions appear to be closely tied to whether the state they are in is red or blue.

Data from the College Crisis Initiative at Davidson College was able to predict the likelihood of whether an institution planned to be in-person or predominantly in-person for the fall term based on the political leanings of the state.

"In an ideal world, perhaps it shouldn’t matter whether there’s a D or an R after your governor’s name," said John Barnshaw, vice president of research and data at Ad Astra, which provides scheduling software and consulting services to institutions of higher education. The company also partnered with Davidson College for its data project by sending out surveys to its members. "But it seems to matter, for better or for worse." ...

If the state was carried by President Trump in the 2016 election, colleges in that state are significantly more likely to have planned more in-person instruction in the fall. This is also true for states with Republican governors and Republican control of legislatures. Colleges in states with a trifecta of a governor, state senate and house all under control of the Republican Party are even more likely to be in person.

The inverse also is true — colleges in states with Democratic governors or legislative control are more likely to offer remote instruction. ...

Barnshaw also looked at the number of COVID-19 cases per 100,000 people in the state. This factor wasn't significant in most models.

Are you apologizing for rejecting medical science? Because that's what you did, here on this blog, back when you supported mass protests during the pandemic.

P.S. If you're going to quote something I say, at least address my main point. Which you still haven't.

"I knew Blue America had given up on medical science..."

Sorry, but it's Red America that's given up on science. You obviously haven't heard the repeated anti-science remarks of Red America's president, Donald J. Trump.

The map also suggests there is a strong correlation between population density and teaching methodology. The high population centers were the hardest hit by COVID-19 in terms of death count and hospital over-run and would be the most sensitive to COVID-19 concerns. If the study didn't control for population density, then I have a hard time accepting the findings as causal in any way. I do think the findings are plausible, but I'd be very hesitant to accept the conclusions in the absence of some pretty basic and important controls that I don't see anywhere in the article.

I knew Blue America had given up on medical science when they wholeheartedly endorsed mass protests in late May, in direct violation of their own public health orders, which were the strictest in the country.

This really isn't a surprise. Despite not knowing everything about the virus, we do know that the young and healthy have the absolute lowest risk. But of course, that never mattered to Blue State governors and college administrators.

In my home state, the superintendent of schools in Los Angeles literally said the other day that it made no sense to open schools until "after the election."