Lipman: Pro Bono Matters On the Basis of Sex 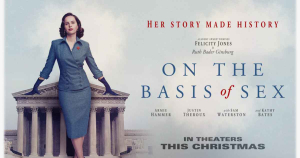 The movie On the Basis of Sex begins on the testosterone-dominated stairs of Harvard Law School, to the booming blare of “Ten Thousand Men of Harvard,” the still-popular Harvard fight song. Framed by the equal partnership that is Kiki and Marty Ginsburgs’ true-love story, the movie chronicles now Supreme Court Justice Ruth Bader Ginsburg’s methodical path to overturning laws that discriminated on the basis of sex. Central to the movie is a pro bono tax case. This essay describes the tax case and why pro bono mattered so very much to the taxpayer, Charles E. Moritz, a 63 year-old bachelor living in Denver with his mother, Mrs. B.E. Moritz. Mrs. Moritz was 89 and in poor health, suffering from arthritis, loss of hearing, lapses of memory, and other senior ailments. Mr, Moritz cared for his mother by paying for care in his home. He filed his tax return claiming a tax benefit that was statutorily not allowed for unmarried men. Mr. Moritz went to the U.S. Tax Court and lost. Marty Ginsburg, a renowned tax attorney, read the decision and handed the written transcript over to his wife, Ruth Bader Ginsburg. Ginsburg sought to represent Mr. Moritz on his appeals a pro bono basis. Pro bono tax mattered deeply to Charles and his mother and, in turn, it jump-started a successful litigation strategy that in time lead to the U.S. Supreme Court finding that discrimination on the basis of sex was unconstitutional.

In that case the Court struck down a long standing male-only admission policy at a state-supported military college, and helped establish the test that, because VMI failed to show an "exceedingly persuasive justification" for its gender discriminatory admissions policy, it violated Equal Protection.

Ironically, the first women admitted to either of the only two state-supported military schools still in existence at the time - VMI and The Citadel - was Shannon Faulkner, who was admitted by the Citadel because her first name probably sounded male rather than female to the admissions authorities.

When The Citadel tried to kick her out because her admission violated its male-only policy, the Justice Department stepped in, and a court ruled that removing her simply because of her gender would constitute illegal sex discrimination.

I’m proud that it was my complaint which led to her admission, just as a similar complaint led to women being admitted to the Cosmos Club despite its 100+ years of tradition of admitting only persons “distinguished in science, literature, the arts, a learned profession or public service” who also happened to be born with a penis.

For more information, sign up for:
MY ODYSSEY FROM GEEK TO GIGOLO TO GOOD DOER
https://bit.ly/3ibhSUS