A First Step Toward Loving Our Enemies 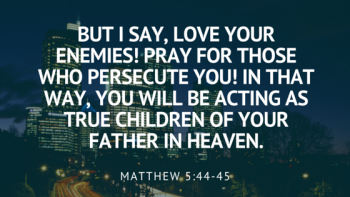 [A] growing number of Americans regard their political opponents not as fellow citizens with whom they disagree but as enemies; as politically, socially and even morally irredeemable. Millions of Americans consume news in echo chambers, while countless numbers have lost friends or even turned away from family over political disagreements.

This tendency to divide the world between us and them has come even to American churches, where righteous advocacy of social justice can come across as self-righteous scolding of individuals. Christians have a religious duty to champion the cause of justice. But as the prophet Micah teaches, they also have the duty to walk humbly with God and with their neighbors, especially when tempted to think of themselves as the swords of divine judgment.

Ultimately, everyone bears responsibility for polarization. This might seem like unwelcome news, but it’s the opposite. As long as the cause of the problem is someone else, then nothing can be done. But those who acknowledge how they contribute to the problem also can begin to imagine how they can create a better culture. In this world Americans would see each other as neighbors and treat each other as friends, even and especially when they disagree deeply.

We are priests from different Christian churches. We belong to different generations and have worked for different political parties. Yet we share a love of country that transcends those differences. Above all, we share a faith in God, who alone has the power to separate the righteous from the sinners.

This may sound fantastical or naively optimistic, but a common element in the traditions of both our churches may provide a practical model for reducing polarization. It is called the exchange of peace, a simple act of reconciliation before beginning the most sacred part of the liturgy. We turn to one another and say: “The peace of the Lord be always with you.” This practice should go beyond our sanctuaries. Imagine if Americans began to exchange the peace with their political opponents. In a secular setting they could simply say, “I am your friend.”

This would transform the tone of politics. Treating opponents as friends would be more than a nicety. By showing that we are disposed to listen as well as speak, it would make possible real dialogue. ...

It is essential that people of faith take responsibility for healing the divisions caused by polarization, and that we bear witness to the solution and not add to the problem. Americans generally, and Christians specifically, have a duty to act civilly, to will the good of others—or, in Christian terms, to bear witness to that divine love that knows no borders; to the God for whom love, mercy and justice are the only standards of human action.