WSJ: Purdue Closes MBA Program Due To 70% Enrollment Decline; B-Schools Outside Top 20/30 Will Struggle To Survive 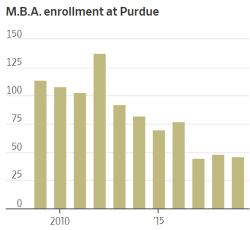 Purdue University’s Krannert School of Management in Indiana said last month that it would stop admitting students to its two-year resident M.B.A. program for the 2021 academic year, making it one of the most high-profile schools yet to close its program.

The pandemic accelerated Purdue’s decision to shut down its traditional M.B.A. and focus on other graduate and undergraduate degrees, said Tim Newton, a spokesman for the Krannert school.

“I don’t think we’ll be the last school to pause our M.B.A. program,” he said. “Within the next five or 10 years, there will only be a pretty select group of residential M.B.A. programs left. A lot of schools outside of the top 20 or 30 will struggle to keep afloat.”

Purdue’s business school, like many of its peers, has been under pressure for years amid weak demand. Applications to Krannert’s full-time M.B.A. program have dropped 70% since 2009. ... The declines led more than 100 business schools to shutter their two-year M.B.A. programs between 2014 and 2018. ... In a spring survey of about 50 business school deans conducted by Eduvantis, nearly half said the pandemic would accelerate business-school closures. Some large public schools similar to Purdue, such as M.B.A. programs at other Big Ten universities, could be next to fold. ...

Despite the dour forecast for many U.S. M.B.A. programs, several admissions experts predict that top-tier schools will be able to ride out the pandemic and may even see a surge in applications.

Are businesses discovering that an MBA isn't of much value? Maybe.