The Cancel Culture, Forgiveness, And Hamilton

Following up on my previous posts (links below) on the power of forgiveness and its brilliant portrayal in Hamilton:  Jordan J. Ballor (Acton Institute for the Study of Religion & Liberty) & Eric J. Hutchinson (Hillsdale College), Forgiveness as a Political Necessity: 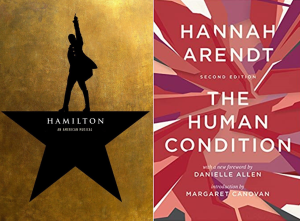 In an age of Twitter mobs and cancel culture, it’s becoming clearer every day that no cultural artifact or icon, no matter how old, banal, celebrated, or grandiose, is safe. One of the latest targets is the smash Broadway hit musical Hamilton. The tragicomedy of targeting a phenomenon like Hamilton is manifest in the reality that the musical actually has much to teach us about how to live, and perhaps even to flourish and prosper, together in the midst of injustice, turmoil, and suffering.

Near the opening of the show, a young Alexander Hamilton reflects on the prospects for the movement for independence. War, it seems, is a necessity; the revolution is coming and Hamilton is committed to fighting for it. But, he wonders, “If we win our independence, is that a guarantee of freedom for our descendants? Or will the blood we shed begin an endless cycle of vengeance and death with no defendants?”

In these brief lines Hamilton captures the two possible futures for America, one leading to life and the other leading to death. In recognizing these possibilities Hamilton shows himself to be a prescient student of history and the consequences of revolution. The dominant image called to mind by the word “revolution” is that of a wheel (from revolvere, “to revolve”) so that as the wheel turns, the cycle progresses. Those who were on the bottom end up on top and those who were on top are laid low—until the next turning of the wheel.

The problem with revolutions is that those who were on the bottom and are newly in charge very quickly use that power to tyrannize those who are now on the bottom. Using a complementary image, the Puritan Roger Williams was among those who observed that those who have been liberated from tyranny rapidly become tyrants themselves. Such hypocrites “persecute when they sit at the helm, and yet cry out against persecution when they are under the hatches” of the ship of state.

Thus, as Hamilton recognizes, those who have been wronged will eventually become powerful enough to avenge themselves on their oppressors; in so doing, they will create a new generation of the aggrieved, who will in turn repeat the pattern until it becomes “an endless cycle of vengeance and death.”

The only other option is one of new possibilities for life together, one in which the nation continually seeks to live up to the covenant made in the promissory note affirming the equality of all people before their Creator. Rather than retribution and revenge, this narrower path is opened up by a novel phenomenon: forgiveness. We see this new dynamic at work toward the conclusion of the musical, when Eliza Schuyler Hamilton somehow finds a way forward with her husband Alexander after betrayal and grief.

Eliza’s sister Angelica narrates their reconciliation, which is accomplished through Eliza’s forgiveness of Alexander. “There are moments that the words don’t reach,” sings Angelica, “There is a grace too powerful to name.” This is the unimaginable grace of forgiveness for those who do not deserve it. This is a grace that allows a relationship to exist in the face of unimaginable suffering and wrong.

Perhaps we can see easily enough how such forgiveness is a necessity at the level of personal friendships and even marriages. But does forgiveness have any role to play in secular, public, and cultural affairs? Can we think of forgiveness as a political reality?

If we make the effort, we immediately meet with an impediment. For if forgiveness has any corporate meaning for us at all, a society still sipping digestifs in the dusk of the long sunset of Christendom likely thinks of it—but only in a vague way—as little more than a relic of ecclesiastical procedure. This churchly association is no coincidence. Indeed, some political philosophers have looked to Jesus as the originator of our notions of forgiveness. In The Human Condition, Hannah Arendt remarks that “the discoverer of the role of forgiveness in the realm of human affairs was Jesus of Nazareth.” ...

Arendt expands on this idea later. “Forgiveness,” she says, “is the exact opposite of vengeance.” Why? Because forgiving:

is the only reaction which does not merely re-act but acts anew and unexpectedly, unconditioned by the act which provoked it and therefore freeing from its consequences both the one who forgives and the one who is forgiven. The freedom contained in Jesus’ teachings of forgiveness is the freedom from vengeance, which incloses both doer and sufferer in the relentless automatism of the action process, which by itself need never come to an end. ...

A society without forgiveness is like hell on earth. This is as true for societies on a smaller scale like marriage as it is for larger political communities. Marriages that last all have one thing in common: spouses that extend forgiveness to one another rather than withholding it. This kind of forgiveness is by no means the manifestation of a cheap grace. It is instead a grace, as Angelica Schuyler Hamilton describes it, “too powerful to name.” For Christians, forgiveness is only possible because of the costliest sacrifice imaginable.

As the political philosopher William B. Allen has noted, America itself is well understood as a “love story,” which includes “a moral commitment between the people and the government.” Forgiveness is the foundation of any true love story. Cancel culture necessarily ends either in self-immolation or in reeducation camps and gulags, creating its own kind of hellish existence—documented so powerfully by Solzhenitsyn. Forgiveness, by contrast, forges new beginnings and opens up new possibilities.

Or as that line from Hamilton wonders, “Forgiveness … can you imagine?” Life together, as it turns out, is actually unimaginable without it.

Hamilton Invites Us to Imagine the Power of Forgiveness:

Alexander is not Burr’s only foil. Another character in the show is despicably betrayed by Alexander. Calm, collected, gentle Eliza falls head over heels for Alexander when they first meet. She declares herself helpless in his presence, and her gentle demeanor stands in stark contrast to Alexander’s “large and startling” character. Her quiet faith in their relationship makes his infidelity all the more heinous. Furthermore, he not only destroys his relationship with Eliza, but also gives his son advice that ultimately causes Phillip’s death. It’s not entirely fair to blame Alexander for his son’s demise, but at the same time, it’s reasonable to imagine that he shoulders some blame. Within minutes, and with horrific efficiency, Alexander manages to ruin his marriage to Eliza and rob her of her eldest child. Either of these circumstances could have resulted in Eliza claiming that Alexander ruined her life, although she refrains from making that declaration herself.

In this way, Burr and Eliza are also foils. Both suffer deeply personal betrayals from a man they trust, and both must grapple with how to respond. While Burr naturally struggles under the weight of this blow, Eliza responds with supernatural grace. She quietly processes her pain, and, in the midst of her grief, takes Alexander’s hand. ...

One of the many difficulties we face when asked to forgive is that forgiveness may appear to be an excuse, like a justification or diminishment of wrong. Hamilton’s large and startling figures allow for no such illusions. Eliza’s pain is keenly felt, her injuries are fully apparent, and there is no question as to who has betrayed her. She does not forgive because her pain is minimal, but because it is significant, and she overcomes it.

This act of forgiveness grants Eliza both proximity to Alexander and power over her own future. After Burr abdicates his role as narrator, Eliza takes over, concluding the show in her own words. Many have rightfully lauded the final scene in which Eliza takes center stage and narrates. Quietly, beautifully, she defends Alexander’s legacy, explaining her continued devotion to him even after his death. She redeems his life in ways he could not accomplish himself, helping to establish a national monument and opening an orphanage in New York City. Free from bitterness, free from anger, she is free to love—her country, children in need, and her late husband. Forgiveness liberates her, and she boldly and unapologetically creates her own legacy. Alexander is redeemed, not because he deserves it, but because Eliza grants redemption to him.

It’s particularly telling that the company asks, “Can you imagine?” while watching Eliza take Alexander’s hand in an act of forgiveness. Hamilton is not an appeal for us to remember the past with exact fact and form, but to imagine. Can we imagine a man who is both malicious and charming, intellectual and unrestrained, a triumph and a failure? Can we imagine his opponents—political equals and rivals, friends and foes, competitors and allies? Can we imagine the women—strong and decisive, conniving and sacrificial, fierce and protective? And, most incredibly, can we imagine Eliza—a woman of excellent character, who invests in her family and community with striking faithfulness—can we imagine that she will suffer unfathomable betrayal, loss, and humiliation—and respond with forgiveness?

For more musings on faith, forgiveness and Hamilton, see: