The Best-Timed Charitable Gift Ever: 'There Is No Law Against Insider Giving' 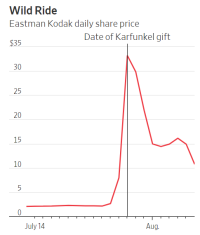 Eastman Kodak’s wild stock-market ride produced what might be the biggest contribution on record to a religious nonprofit, the product of a well-timed gift by Kodak board member George Karfunkel.

In a securities filing last week, Mr. Karfunkel and his wife, Renee Karfunkel, said they donated 3 million of their 6.3 million Kodak shares to Congregation Chemdas Yisroel in Brooklyn, N.Y.

The congregation was incorporated in Delaware in 2018 and uses a Brooklyn accountants’ office as its mailing address, New York charity-registration filings show. Mr. Karfunkel is listed in those filings as its president.

The securities filing said the gift took place July 29, the day Kodak stock closed at its highest level since 2014. Using the average of the stock’s high and low that day of $38.75, which is how the Internal Revenue Service values stock gifts, the donation was worth $116.3 million.

That would make it the single largest gift recorded to a religious group, based on a list maintained by the Chronicle of Philanthropy. ...

Kodak stock traded for a little over $2 on July 27, the day before the federal loan was announced. It briefly surged to $60 on July 29—the date of the Karfunkels’ gift. The shares tumbled 28% on Monday to close at $10.73, putting the current value of the gifted shares at roughly $32 million. It is unclear if the donated shares have been sold.

The Karfunkels’ donation could generate tens of millions of dollars in income-tax benefits for the couple, who property records show have homes in New York City and Florida. ...

David Yermack, a New York University finance professor who has studied stock gifts, said he wasn’t familiar with the Karfunkels’ donation, but “in general there’s a lot of circumstantial evidence that people backdate charitable gifts to local maximums in the stock price, when they could get the maximum charitable deduction.” He said the chances of such favorable timing are greater when the donor has ties to both sides of the transaction—as did Mr. Karfunkel with the congregation.

On the other hand, said Mr. Yermack, who also holds a law degree, “there’s no law against insider giving.” If a director like Mr. Karfunkel felt the stock was likely to drop, he was free to give away his shares.

Of course, he made the share price go up by getting a friend to buy a few of the thinly traded shares. Of course its tax fraud. And of course he will get away with it. Remember when we used to make fun of the Italians for making a sport of tax cheating...

Who gets to vote the proxies on these shares? This is little different from donor-advised funds, or the Zuckerberg/Chan charity, where the donors make huge donations of stock and take the full value of the charitable deduction, but retain voting control over those shares. Unlike you or I with 100 shares of XYZ, which votes are unlikely to change the outcome, someone who donates millions of shares of XYZ but retains voting control gets the best of both worlds.

The charitable deduction should be reduced by the value of those votes. How to value that? The IRS can pick a number, e.g., 1/3 the value. A comparison would be the higher value of stocks with greater voting rights.

I think the argument could be made here that the fair market value even of securities traded on an open market was not the "blip" price, because the hypothetical "buyer" here did not have "reasonable knowledge of the relevant facts," per reg. section 1.170A-1(c)(2). Also in the particular case there is some question whether the purported charity is legit.

"No law against insider giving" doesn't ring true to me.