Women’s Experiences At The University Of Chicago Law School

The Women’s Advocacy Project (WAP) was a research project designed and run by law students at the University of Chicago Law School (“the Law School” or “UChicago Law”) during the 2017–2018 academic year—the first study of its kind to be conducted there. WAP collected data in an attempt to accumulate a rich and detailed set of information about women’s experiences at the Law School. WAP had four primary research components: classroom observations, achievement data collection, a student survey, and professor interviews. The project represents the efforts of over seventy law students. This article, written in the fall and winter of 2018, is a condensed version of WAP’s initial report. Readers interested in more detailed information about WAP’s methodology, findings, and recommendations should access the report here.

WAP found significant differences between men’s and women’s experiences at the Law School, many suggesting that women still face considerable roadblocks and hurdles in legal education there. For example, women graduate with honors proportionately less frequently, 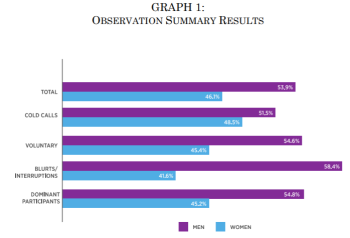 and are less likely to be satisfied with their law school experience than men. The data, however, also showed that women have made significant strides at the Law School.

WAP sought primarily to document and describe, but its initial report also offered recommendations responsive to the problems it identified. This article mentions some of those recommendations and suggests areas where further research is warranted.

As for Table 3, look at an IQ distribution graph. The genders are not the same in terms of IQ distribution. There are more men at the extremes of the distribution, thus men will tend to get honors a bit more often that women.

This isn't rocket science. At least to anyone who's not politically deranged.

Law school grading, at least in the courses with exams, is "blind" so that the professors would not be able to determine the gender of each exam writer. While clinics and seminars do not have blind grading, I doubt that even if there were gender discrimination in grading of clinics and seminar papers, that would not change the overall rankings.

Anon: So you are convinced that IQ analysis is not gender-biased?

I'm sure you will agree there is a group of people, predominately men, with EQ scores of roughly 0 that cling to IQ scores like a security blanket - and the amount of time they've spent pondering the actual validity of that single-metric intelligence "score" conjured by a lawyer in France in 1904 is... also 0.

You guys ought to be pleased. Colleges are throwing out every objective measure of cognitive ability these days, SAT tests for example.

This will really propel America's educational outcomes far beyond those sexist countries in Western Europe and East Asia.

SATs are objective? That's a laugh. A coachable test is one that tests the ability to pay for the coaching. Res ipsa. It's Goodhart's Law in action. But I'm sure you would be happy to know that the SATs were invented by a eugenicist, Charles Campbell Brigham, who claimed that Jews and Asians were dumber than not just white people (the Nordic Race), but also the Alpine and Mediterranean Races, in his book "A History of American Intelligence." A book that both acknowledged being inspired by Madison Grant's "The Passing of the Great Race" and was a major inspiration for Hitler.

The estimated $555 billion in state budget deficits for 2020-2022 will propel America's educational outcomes into the grave, worry not. But it will all be worth it if we don't have to raise Paris Hilton's taxes.

What makes this all the more hilarious is that law school exams are almost always essay-based, and women are better suited to score higher. Imagine if law school exams were multiple choice!

@MM: Amen. And they’re getting rid of the SAT/ACT just in time for the final nail in the coffin of the use of race in admissions. See recent Yale and DOJ news. Not rocket science what’s going on and all the preparation being done. Ignore the gaslighting in these comments about how the SAT/ACT isn’t being phased out in preparation for the end of affirmative action.

Not every gender difference is gender bias. Do women receive preferences for enrollment to get more women in law positions? Almost certainly. If so, do Women come in with lower predictors of success, on average, than men? Yes. If the predictors of success are effective at doing what they're supposed to do, then should be ever be surprised when the cohort with the fewest enrollment preferences holds a disproportionately high percentage of the top of the class? No.

@Unemployed Northeastern: For some reason, the higher the IQ, the more successful the person in the generally accepted definition of the word. It’s measuring something useful between one’s earlobes. Also, how do you feel about Margaret Sangers on that note.

You just proved my entire point with that lengthy screed that avoided, conspicuously, any logical criticism of the SATs, as well as any alternative that is objectively better at measuring cognitive ability.

Not sure why you're opposed to eugenics, since everybody on the Left was enthusiastically in favor of it a hundred years ago, including the founder or Planned Parenthood, Woodrow Wilson, etc.

Anyway, why cut around the edges? Surely you should be consistent and advocate the total demolition of public education, K-12 and colleges and universities. After all, you can go back in the history books and find pretty much everybody who promoted those institutions as being old white racists who could never measure up to your standards of progressivism today.

In a hundred years, your political ancestors on the Left will no doubt call YOU a dinosaur. I'll just settle for calling out your complete moral hypocrisy here in the present, as always.

P.S. Care to defend Yale's affirmative action program? The DOJ just declared it violated the 1964 Civil Rights Act by discriminating against Asian and white applicants. I know you love that sort of thing, so I'm all ears...

"Not sure why you're opposed to eugenics, since everybody on the Left was enthusiastically in favor of it a hundred years ago, including the founder or Planned Parenthood, Woodrow Wilson, etc."

As for the DOJ, I'm waiting for any specificity in their allegations. Rather tellingly, they have not provided any data to support their stance, and Yale is noting that they haven't even taken receipt of all of the documentation they requested. Also can't help but notice the lack of concern about legacy admissions, which overwhelmingly benefit underqualified, wealthy white applicants. This is all desperate posturing to Trump's angry white base in an election season where he's currently down anywhere between 10% and 15% nationwide, down 5% to 10% in every swing state, and not even holding a lead beyond the margin of error in Texas and Georgia. It's also amusing in an ironic way, since it is well-documented that Trump and his senior advisors of nepotism, Ivanka and Jared, were all admitted on the basis of wealth and targeted donations, not merit.

"For some reason, the higher the IQ, the more successful the person in the generally accepted definition of the word. It’s measuring something useful between one’s earlobes. Also, how do you feel about Margaret Sangers on that note."

1) Your unfounded correlation as causation is backwards: it is well-known the test-taker's household income has the highest predictive ability for what range the score will be.

2) Margaret Sanger has been dead for ages. Today's eugenicists are all on the right, and notably none of them are actual scientists - Charles Murray,

@MM: The factual hits just keep on piling on, on our dearest Unemployed Northeastern. Must live in a blue, liberal cocoon wonderland.

1) Are you not committing the same sin that you accuse me of committing? How about their household income is high because they’re more intelligent to begin with. Maybe that’s why they have high household income. Regardless, it is plain tomfoolery to think that, even taking into account expensive test prep, the difference in scores do not reveal differences in actual intelligence.

Also, Charles Murray is NOT raciss. That’s an ugly lie.