Over the last several years I have published two articles focused on net tuition trends across law schools in the period since the Great Recession.  Net tuition is an approximation of the tuition per student after accounting for scholarships.  The first article focused on the period through 2014-15; the second article focused on the period through 2016-17.  This blog posting carries forward the analysis of net tuition trends through the 2018-19 academic year, highlighting that law schools still have not regained much pricing power yet.  This blog also looks at likely trends carrying forward from the 2019-20 academic year.

What is the simple story between 2010 and 2016?  In the face of a declining applicant pool, and an applicant pool that also weakened in terms of the LSAT composition of the applicant pool, law schools became much more competitive in trying to attract students, particularly students with stronger LSAT/GPA profiles, by greatly increasing their scholarship offers.  Between 2011 and 2016, the percentage of all law students on scholarship increased from slightly less than 50% to nearly 70%, while the average median grant went from slightly more than $13,000 to nearly $17,000.  As a result, as reflected in the two articles identified above, net tuition at the vast majority of law schools declined during this period.

If one were of the view that the tuition discounting in which law schools have been engaged is “unsustainable,” one might expect that in the face of a growing applicant pool (and particularly an applicant pool that has grown stronger), law schools might take advantage of this increased “demand” to increase net tuition.  But the available data suggest that net tuition has increased only modestly across 2017-18 and 2018-19.  Somewhat surprisingly, most of that increase was in 2017-18 rather than 2018-19.

I broke the private law schools into four categories based on USNews rankings using the March 2013 published rankings.  I then integrated enrollment data to calculate weighted averages for net tuition and changes in net tuition over time across all the law schools in a given rankings category.  Note that the net tuition calculations are based on the entire student body, not just first-year students, as the ABA requires law schools to report scholarship and grant data across all JD students. 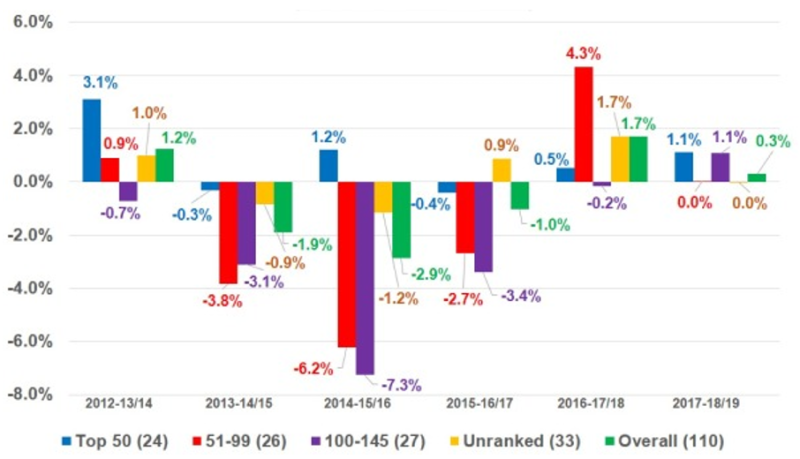 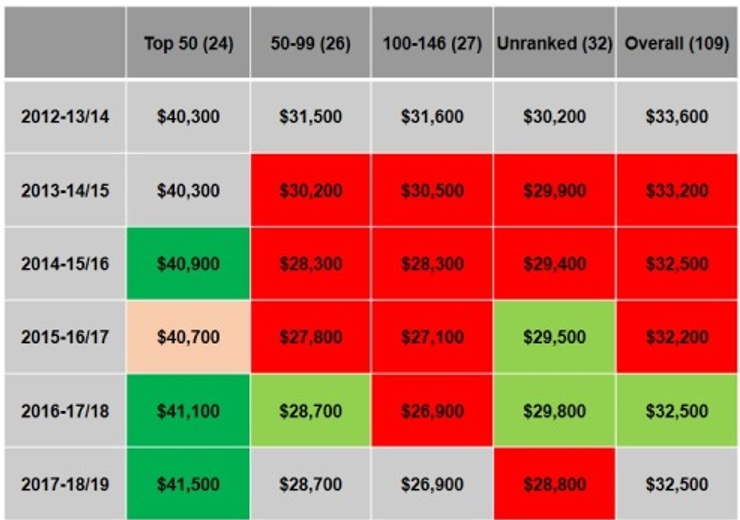 Interestingly, within each of these four categories of private law schools based on the March 2013 USNEWS rankings, there is a fairly broad range of net tuition.

With the applicant pool continuing to grow slightly in 2019-20, and growing slightly stronger as well, one would anticipate that when the scholarship and grant data for the 2019-20 academic year are reported in December 2020, we may see that across private law schools on average there was a further modest increase in net tuition.  The 2020-21 admissions cycle, on the other hand, is more complicated for a variety of reasons.  Up until June, it appeared that applicants were going to be down, because of the transition to the digital LSAT in July 2019, which meant a large number of the July 2019 LSAT takers canceled scores and had to retake, and because the Covid-19 Pandemic resulted in the cancellation of the March and April administrations and the implementation of the “Flex” LSAT beginning in May.  In the end, the applicant pool for 2020-21 has increased by a little over 1% due to a late surge in applicants.  The pool also is stronger compared to the prior year.

But law schools had to make scholarship decisions in January, February, March and April, when the applicant pool looked like it might be slightly smaller (even if slightly stronger), and when there was some concern — by March and April — that applicants might be disinterested in attending law school if their legal education were going to take place completely or mostly in an online format as a result of the Covid-19 Pandemic.  I think that when the 2020-21 scholarship and grant data are reported in December 2021 the data will show that net tuition did not change very much.  Concerns about the impact of Covid-19 and the competition for strong applicants in an applicant pool that seemed like it might be smaller probably constrained a number of law schools from cutting back too much on scholarships such that the weighted average net tuition across all private law schools may not have changed much at all.  On the other hand, to the extent that tuition discounting has reached a point where it is not sustainable, it may be that some schools made a concerted effort to generate additional revenue by reducing scholarships and increasing net tuition, which would suggest the possibility of some continuing modest increase in net tuition.

WHAT WILL HAPPEN IN THE NEXT ADMISSIONS CYCLE?
The 2021-22 admissions cycle will open on September 1 and it promises to be a particular challenge.  There is a real possibility that there will be a growth in applicants if the economy remains challenged by the Covid-19 Pandemic and college graduates do not have other meaningful opportunities.  There has been an understanding that legal education is counter cyclical — that the number of applicants increases when the economy struggles.  That is certainly what we saw in 2009 and 2010 in the midst of the Great Recession.  On the other hand, if the lived experience of first-year and upper-level law students in the coming academic year is less than robust under a predominantly online or hybrid learning structure, some potential law students may decide to wait things out until law schools can provide the traditional in-person learning experience they want. If there is a functional vaccine for Covid-19 by early in 2021, however, that may mean in-person learning is more of a possibility, but it also may mean a growing economy that may reduce the number of applicants to some extent.

One might think that the analysis of net tuition will largely be a function of the applicant pool – of whether there is growth in “demand” — and thus be hard to predict without a little more clarity regarding what is happening with applicants in the new cycle.  But there is a separate economic reality that likely will have a ripple effect on law schools and on net tuition.

Those law schools that are part of a college or university are likely going to be facing particular budget pressures that mandate an increase in net tuition, if at all possible.  The revenue losses that colleges and universities have experienced and will experience as a result of the Covid-19 Pandemic are unlike anything we have seen in our lives.  Colleges and universities are not going to be in a position to be a financial “backstop” for law schools, and well may be looking to their law schools to help make up for some of the revenue shortfalls experienced due to Covid-19.

Thus, if the applicant pool does increase AND grows stronger, average net tuition is very likely to increase in the 2021-22 academic year.  But even if the applicant pool does not increase meaningfully in size or strength, the financial realities confronting colleges and universities likely will mean net tuition will have to increase at a significant number of law schools in the 2021-22 academic year.

(I am grateful to Bernie Burk and Scott Norberg for comments on a previous draft of this blog post.)