NALP, Class of 2019 Attains Highest Employment Rate in 12 Years as Uncertainty Looms for Class of 2020: 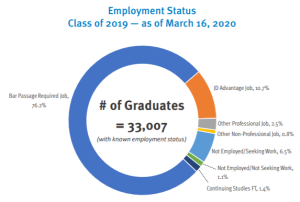 “The good news is that employment outcomes and salary findings for members of the Class of 2019 are among the strongest ever measured and set several new highwater marks,” noted James G. Leipold, NALP’s Executive Director. “The bad news is that they are not likely to be predictive of the employment outcomes for the next several classes, as the recession and other changes brought about by the COVID-19 pandemic are likely to provide a much more challenging job market for some years to come.”

• The percentage of graduates taking jobs for which bar passage is required or anticipated grew by 3.4 percentage points, increasing from 72.8% in 2018 to 76.2% in 2019, following a one percentage point increase in the previous year.

• 74.3% of graduates with known employment status were employed in a full-time, long-term bar passage required job.

• Well over half (55.2%) of employed graduates obtained a job in private practice, a slight increase of 0.4 percentage points over the previous year and the closest the percentage has come to the 55.9% figure for 2009 since then.

• Employment in business declined to 11.3%, down from 12.9% in 2019 and now stands at its lowest percentage since the Class of 2002. Business has dropped from being the second most popular employment sector for new law graduates in recent year to the fourth most frequently reported sector for the Class of 2019.

• The percentage of jobs that are solo practice was at a historic low of 1.5% of all law firm jobs and 0.8% of all jobs.

• The total number of public interest jobs, which includes jobs as public defenders and in legal services offices, remains higher than it was prior to 2009, in no small part because of the presence of law school funded jobs in this sector, which accounted for 10.4% of all public interest jobs taken by the Class of 2019.

It's really not my problem if you troll on a website for law and tax professionals but don't have the knowledge to know how to copy and paste my sources into Google to find them all by your lonesome. Basic fact-checking is hard, I know! But maybe some day, if you apply all of your limited faculties to it, you'll be able to find something on the Internet. And of course my interlocutor didn't provide any sources either but you failed to notice that. Man, you are dumb.

Clarification: He doesn't care about factual details. He's got his complaints pasted into a word document and posts them ad infinitum. Never provides sources, either.

And the point remains that nearly a year after graduation in the best of recent economic times, the law school employment outcomes were horrific and the median salary was lower than the median salary of twelve years prior even without accounting for inflation. It's indisputable, and we have several years of much worse outcomes ahead of us. Historical data about the purported outcomes of the Class of 1995 are just completely irrelevant now.

NALP only surveys about 1/2 of law school grads each year, and as they have admitted in the past, the way they go about it results in a median salary that is at least 12% higher than if they surveyed everyone.

The Department of Education's data, on the other hand, comes from everyone's tax returns.

To measure employment/unemployment, NALP asks whether a graduate was employed on March 15th. The government via BLS asks whether someone worked an hour for pay in the past week. Very different questions! So your comparison of unemployment rates is completely off-base.

Wow, so law school grads had roughly a 10% unemployment rate (nearly a year after graduation!!) at a time when the national unemployment rate was barely 3%. Awesome job. Did I mention that not even 4 in 10 adults has any sort of college degree?

Oh, and the NALP median starting salary for the Class of 2008 was $72,000, which works out to $85,000 and change in today's dollars, so there is still a lot of ground to recover from the Great Recession. And say, the Department of Labor's salary information, which is based on graduates' tax returns and not cherrypicked surveys and therefore much, much more accurate, says that the median starting salary for lawyers is about $53,000, not $72,000. Why the discrepancy, NALP?

Also, talk about burying the lede: "In very simple terms, the rising employment rate can be explained by the fact that the size of the graduating class has consistently fallen faster over the last six years than has the number of jobs secured."