We estimate the increase in earnings from a law degree relative to a bachelor’s degree for graduates who majored in different fields in college. Students with humanities and social sciences majors comprise approximately 47 percent of law degree holders compared to 23 percent of terminal bachelor’s. Law degree earnings premiums are highest for humanities and social sciences majors and lowest for STEM majors. On the other hand, among those with law degrees, overall earnings are highest for STEM and Business Majors. This effect is fairly small at the low end of the earnings distribution, but quite large at the top end. The median annual law degree earnings premium ranges from approximately $29,000 for STEM majors to $45,000 for humanities majors. 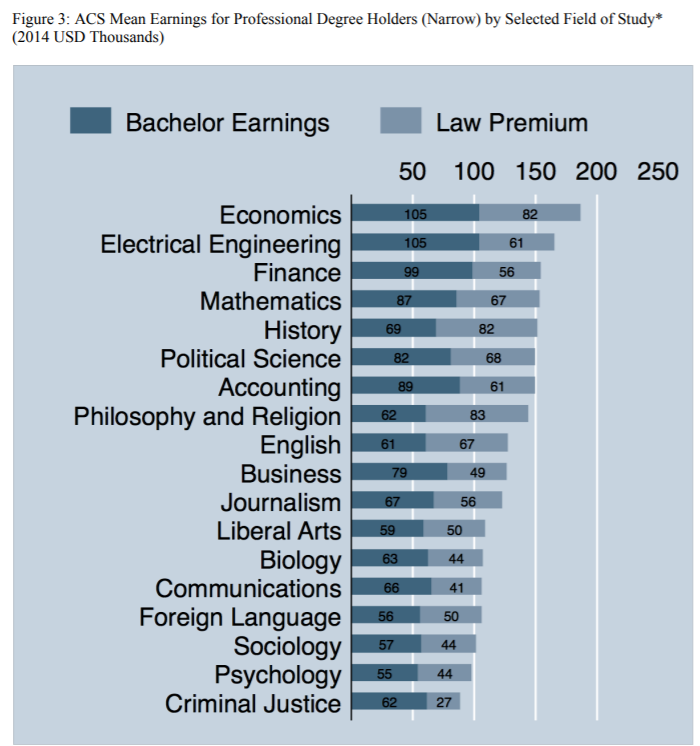 preLaw, Which Undergrad Majors Make the Most Money as Lawyers?:

A law student’s undergraduate major could have a big impact on their earnings as a lawyer, according to a new study.  Students who majored in economics, finance and math earn the most as lawyers. But students who studied humanities showed the greatest increase by adding a law degree.

“It’s not surprising that STEM majors do well with a law degree as those set you up to be an intellectual property lawyer, corporate lawyer or tax lawyer,” said Michael Simkovic, one of the studies two authors and a law professor at University of Southern California Gould School of Law. “But the added value was higher for folks in the humanities, which is where most law students major.”

The study found that a law degree is associated with more than doubling of expected earnings for humanities majors, doubled earnings for social sciences majors, and closer to 50% increase for business and STEM majors. ...

Simkovic said the biggest surprise was philosophy/religion, which tied history for the biggest income increase when adding a law degree.

Considering that tuition generally has to be paid with after-tax dollars, three years of foregone income, finite career length, and time value of money, is $30K per year even a net positive? (Compare to what a good mortgage officer should explain about whether to "buy points," and run some numbers in an annuity calculator.)

On the other hand, if there's a big potential upside, and the losses are socialized...