Liscow & Pershing: Why Is So Much Redistribution In-Kind And Not In Cash?

Zachary D. Liscow (Yale) & Abigail D. Pershing (J.D. 2020, Yale), Why Is So Much Redistribution In-Kind and Not in Cash? Evidence from a Survey Experiment:

Basic economic theory prescribes that redistribution typically take the form of cash rather than in-kind goods and services, since cash lets the recipient choose how to use the resources, thereby maximizing benefits to the recipient. Notwithstanding this benefit, among the trillions of dollars of annual transfers in the United States, redistribution is mostly—and increasingly—in-kind. We help explain why with novel survey experiments to better-understand Americans’ preferences regarding the structure of government redistribution.

Our survey experiment offers a large, demographically representative sample of respondents a hypothetical choice between a cash transfer and a transfer that can only be spent on a bundle of “necessities.” We make three main points. First, survey respondents overwhelmingly preferred in-kind over cash transfers to the poor. The most important reason for this choice is paternalism: the belief that the poor will not spend cash on the right things. The preference for in-kind was common to a majority of virtually all segments of the general population, though not to a sample of intellectual elites. 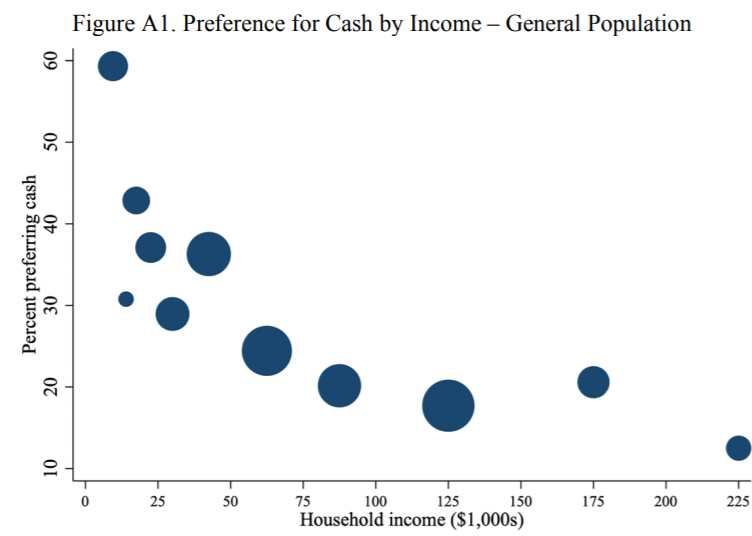 Second, stated preferences suggest that respondents are willing to redistribute considerably more in-kind than in cash. We also surveyed the poor, who preferred receiving cash, but not as strongly as the general population preferred redistributing in-kind. The modesty of this preference among the poor in part comes from a sizable minority that preferred in-kind redistribution, which many anticipated functioning as a self-control mechanism. Third, a randomized treatment explaining the value of choice significantly increased the preference for cash over in-kind, but it did not change the overall preference for in-kind.

While most redistribution is in-kind, nearly $1 trillion of it IS cash and just for Social Security. And all redistribution involves the taking of cash, literally, to the tune of $5 or $6 trillion per year for all levels of government.

The preference for in-kind benefits is a function of liquidity. People prefer in-kind donations to homeless individuals because cash is very easily used to support addictions whereas in-kind benefits either prevent this entirely (you can't sell a bed in a homeless shelter) or at least impose a transaction cost. Additionally, it's possible that some people prefer in-kind because of the administrative costs associated with them (i.e. these types of relief create more jobs for social workers than the provision of cash such as through a tax refund).