Lesson From The Tax Court: Audit Reconsideration Is Not CDP

I cannot say it often enough: the IRS is not an entity.  It’s a collection of functions that, taken together, administer the internal revenue laws written by Congress.  So when someone says “the IRS did this” or “the IRS did that” they really mean that an action was taken by a discrete function, office, or employee within the organization we call the IRS.

Today we learn why taxpayers (and their representatives) need to understand how IRS functions relate to one another.   The taxpayer in Duy Duc Nguyen v. Commissioner, T.C. Memo. 2020-97 (June 30, 2020) (Judge Pugh) thought he was dealing with “the IRS” but he was really dealing with two separate functions: Exam and Appeals.  Because the information he supplied to Exam was not also supplied to Appeals, he was unable to contest the merits of an assessment in his CDP hearing.  Details below the fold. 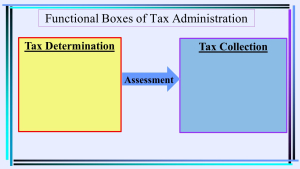 Within the tax collection box, all of the tax collection processes run on two assumptions: (1) taxpayers have the resources to pay their taxes but simply won’t; and (2) the assessment is accurate.  In truth, both assumptions may be incorrect.  Many taxpayers simply can’t pay the assessed liabilities.  And the assessment may be inaccurate if it was made without any input from the taxpayer.  But until they taxpayers can overcome either or both of those assumptions, they are treated as a “won’t-pay” taxpayer.  One difficulty for taxpayers caught up the IRS machinery of collection is finding an actual human to convince that they are a can’t-pay and not a won’t-pay.

CDP is in the Collection Box.  Section 6320 and §6330 are supposed to help taxpayers find an actual human---in the Office of Appeals---to address both assumptions.  Generally CDP deals with that first assumption, that taxpayers have the resources to pay.  As I have written about before, the main purpose of CDP is to allow taxpayers breathing room to work out some payment arrangement for the unpaid taxes.  See e.g. “Lesson From The Tax Court: The Proper Role of Delay in CDP,” (September 19, 2019).

Sometimes CDP allows taxpayers to address the second assumption, that the assessment is accurate.  Section 6330(c)(2)(B) allows taxpayers in the collection box to sometimes force the IRS to, literally, re-assess their tax liabilities.  This is not common, as we learned in Lesson From the Tax Court: The Eye of the CDP Needle (May 4, 2020).  Basically, in order to dispute a tax liability in a CDP hearing and then be eligible for later review in Tax Court, the taxpayer must meet three requirements:

(1) the taxpayer must be eligible to dispute the liability.  They must show that they did not receive an NOD or did not otherwise have an administrative opportunity to dispute the assessment;

(2) the taxpayer must identify the issue in the CDP protest.  That is, the taxpayer needs to tell Appeals they want to contest their liability; and

(3) the taxpayer must then actually provide information for Appeals to decide the issue!

Taxpayers often fail the third requirement.  IRS employees---including Appeals employees--- deal with a high volume of taxpayers, many of whom are hobbyists.  The lived experience of many IRS employees is that taxpayers often fail to provide enough information.  Probably the most common reason (or, sometimes, excuse) that IRS employees give to move an account off their desk is that the taxpayer failed to supply requested information.  You sometimes even see the Tax Court get frustrated at a taxpayer's lack of diligence.  An example I like to give is Hernandez v. Commissioner, T.C. Memo. 2018-163 (Sept. 25, 2018).  There Judge Vasquez suspended trial to give the taxpayers four extra months to provide information necessary to decide the case.  He continued to warn them what would happen if they did not give the information.  He then characterized their repeated failure this way: “petitioners refused to cooperate with the Court.”

The Law: Audit Reconsideration
Section 6404 permits the IRS to abate any assessment if the IRS determines that the assessment was erroneous.  See also Treas. Reg. 301.6404-1(a).  The IRS exercises its discretion here through a process called audit reconsideration.

The IRS will generally permit an audit reconsideration where the taxpayer did not meaningfully participate in the examination---most commonly in response to an automated substitute for return---or presents new evidence.  For an excellent discussion of helping taxpayers into and through audit reconsiderations, see Chapter 10, §8.1.2 in Effectively Representing Your Client Before the IRS, 7th ed. (2018) (Keith Fogg, Editor-In-Chief).  Taxpayers can find guidance in Publication 3598.

Facts
This is a CDP case.  The IRS sought to collect unpaid tax liabilities for 2006, 2007 and 2008.  Mr. Nguyen late-filed returns for those years and it appears they went through audit, with Exam issuing an NOD in February 2014.  Mr. Nguyen did not petition the Tax Court.  The IRS assessed the taxes in May 2015.

In August 2016, the IRS filed a Notice of Federal Tax Lien (NFTL) and sent Mr. Nguyen his CDP notice.

In September 2016 Mr. Nguyen timely requested a CDP hearing, asserting “I do not owe tax. Please find explanation below & extra page.”  The explanation appeared to be the following:

“[a]fter the audit for 2006, 2007 & 2008 Personal Income return, I was advised to submit additional Amendments, which would provide additional proof that I do not owe tax. I’m in the process & request time to complete & gather evidence.”

Apparently the extra page consisted of a statement that he was seeking guidance on how to amend his returns and gathering supporting documents.

In early January 2017, the Settlement Office (SO) in Appeals sent Mr. Nguyen the standard letter setting a hearing date (for February 1, 2017), and telling him to send her any information he wanted her to consider by January 30th.  She also sent him Pub. 3598 on audit reconsiderations.

Notice that in this case, the SO did part of what the IRM says to do.  But she did not suspend the CDP hearing.  Instead, she gave Mr. Nguyen the three weeks before their telephone hearing to send her the same information he had sent Exam.

On February 1, 2017, the SO and Mr. Nguyen spoke by phone. Mr. Nguyen told the SO he had submitted the two amended returns to Exam and asked for more time to submit the other amended returns.  The SO said she had not received the amended returns and declared she had given him “ample time” to send information to her and he had not done so.  So she was going to sustain the NFTL filing.  Bye!

On February 17, 2017, the Office of Appeals issued its formal Notice of Determination sustaining the NFTL.  Mr. Nguyen timely petitioned the Tax Court to review the CDP decision.

Lesson: Exam is Not Appeals
Mr. Nguyen sought to litigate the merits of his assessed liabilities for 2006, 2007 and 2008 in the Tax Court’s CDP review.  Remember, taxpayers can do that only if (1) they did not receive the NOD; (2) they identify the issue in their CDP request; and (3) they give Appeals the information it needs to evaluate the issue.

Judge Pugh found that Mr. Nguyen met the first two requirements but not the third.  Therefore, the Court could not review his claim that the assessed liabilities were incorrect.

As to the first requirement, the IRS showed it had mailed the NOD to Mr. Nguyen’s last known address.  In addition, it showed that he had responded to multiple other types of correspondence sent to that same address.  It argued that proved he had received the NOD.  All Mr. Nguyen had was his testimony that he did not receive the NOD.

Generally, the Court will be wary of relying solely on a taxpayer’s testimony.  This case is no exception.  Judge Pugh believed Mr. Nguyen's testimony precisely because of how assiduous Mr. Nguyen had been in responding to other IRS correspondence.  She noted that he had promptly filed a petition in response to the NODs for two other years, 2009 and 2010.  She also noted that after filing his petition, the IRS had conceded everything in those NODs.

As to the second requirement, Mr. Nguyen submitted the documents, quoted above, where he alerted Appeals that he wanted to contest his liabilities.

However, as to the third requirement, Judge Pugh noted that Mr. Nguyen had never properly told Appeals why he believed the 2006, 2007, and 2008 assessments were erroneous.  All he had done was tell Appeals that he was working it out under Audit Reconsideration and asked for time to work matters out there.  Judge Pugh found that “Petitioner failed to provide SO Krueger with any documentation to contest his underlying tax liabilities.” 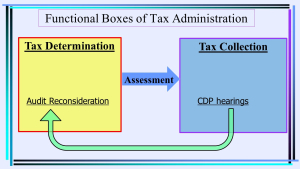 Accordingly, Judge Pugh refused to allow him to contest the merits in his Tax Court proceeding.

After all, Mr. Nguyen seems a diligent fellow.  He’s not like most taxpayers who fail to make any response.  In fact, his diligence in responding to NODs for two tax years not before the Court was a reason why Judge Pugh found Mr. Nguyen credible when he said he did not receive the NOD for the years at issue.

Mr. Nguyen also seems to follow through.  In his initial request for CDP hearing he told Appeals he was working on audit reconsideration.  And, in fact, he submitted two amended returns a month later.  In his CDP hearing he said he needed a little more time.  He did not get it.  Yet, two months later, shortly after filing his Tax Court Petition contesting the Notice of Determination, he also filed additional amended returns.

It appears that Mr. Nguyen’s problem was not a lack of diligence but a lack of understanding the relationship between Exam and Appeals.  From his view, he was trying to work matters out with “the IRS.”  So his telephone conference with Appeals might well have been the first time he realized that what he sent to Fresno was not automatically available to Appeals.  That’s our lesson.  But by the time Mr. Nguyen learned it, it was too late.

So, yes, it seems harsh.  I would caution, however, to remember Judge Pugh’s position.  She was not there to work the case, or re-work the case.  She was reviewing the SO’s decision for abuse of discretion.  The abuse of discretion standard of review does not permit Judge Pugh (or you or me) to substitute our judgment for that of the SO.  That limitation is, in part, a recognition that we as reviewers do not know everything.  Much is not in the record.  For example, we do not here know what information, if any, Mr. Nguyen attached to his amended returns.

Sure, maybe most of us would have given Mr. Nguyen more time.  And it seems to me this SO pulled the trigger pretty quickly.  But the question for the Court was simply whether the SO’s actions followed the law and were within the bounds of reason.  Judge Pugh concluded they were.

Bryan Camp is the George H. Mahon Professor of Law at Texas Tech University School of Law.  He invites readers to return to TaxProfBlog each Monday for a new Lesson From The Tax Court.

Your description of the IRS as a collection of functions, rather than an entity, should be the first lesson of every tax practice and procedure course.

Need to know information. Thanks for the lesson.