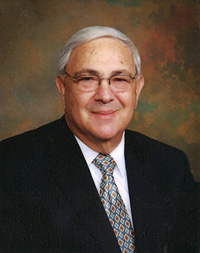 Gersham Goldstein, z"l, died Aug. 6, 2020, at age 81. He is survived by his wife, Pauline, and daughter, Deborah, and her husband Magid, daughter-in-law Jennifer, and his four grandchildren, Noah, Krystal, Logan and Jakob. He was preceded in death by his son Marcus in 2015.

Gersham was born in Brooklyn, New York on Dec. 5, 1938. After matriculating at City College of New York with a Bachelor of Business Administration in 1959, he attended the University of Pennsylvania Law School, graduating with a Bachelor of Laws in 1962. Immediately following graduation, Gersham took a position as a research assistant for Gerald L. Wallace at NYU who became a significant influence in his career.

In 1963 Gersham drove to Oregon to work for Oregon Supreme Court Justice Alfred T. Goodwin. Over his early career he worked for Governor Mark Hatfield, Jacob Javits and taught at New York University and the University of Cincinnati. In the mid 1970s he and his wife, Pauline, returned to Portland where he took a position at Davies Biggs, which later became Stoel Rives, from which he retired as partner.

My friend and former partner, Gersham Goldstein, died of cancer on Thursday. He was 81.
Gersh was a tax lawyer, nationally known and for many years the pre-eminent tax practitioner in Oregon. Before going into law practice, he had been a law professor at the University of Cincinnati and the first law clerk of the Oregon Tax Court. He was the editor-in-chief of the journal Corporate Taxation for more than 45 years, up to the time of his death.

Gersh was a collaborator (that's the guy who does all the work) on the Seventh Edition of Bittker & Eustice's corporate tax treatise. "B&E," as it's known, is the best known book of all time on U.S. income taxation. In the 20 years since the Seventh Edition appeared, no one has been able to update the whole thing, as Gersh did. No one has been crazy enough even to try. He was also the "compiler" (again, the source of the elbow grease) for a publication known as the Index to Federal Tax Articles. Back in the day before computerized tax research, it was the bomb.

I first met Gersh when I joined the law firm Stoel Rives in 1979. He had been there for a number of years, since the days of a predecessor firm, Davies Biggs. Right away, I could see what a character he was: smart as a whip, deeply knowledgable about law, especially tax law, and funny as hell. I had never heard of him until I got to Portland, but it didn't take long after I started working for him that I saw what a force he was.

Now, as I understand it, the name Gersham means "stranger" in Yiddish. With all due respect to Gersham's parents, who lived in Portland toward the end of their lives, they picked the wrong name for their son. He was no stranger; quite the contrary. It seemed he knew everybody, and everybody knew him.

This was especially true in the tax universe. Goldstein was a star in the pantheon of prominent tax lawyers who also spent time in the academic ranks. Jim Eustice, Carr Ferguson, Marty Ginsburg – they were all buddies with Gersh, and the gang of them, connected through the NYU Law School tax program, was tightly knit and powerful. I remember attending an ABA Tax Section meeting in Washington, D.C., and sure enough, there was Gersh right in the middle of it all.

I used to kid Gersh that he was in the "tax mafia." I called him "the Godfather." On a national level, maybe he was just a capo, but in Oregon he was the don. Gersh was the kind of guy who would answer to a nickname. He was from Brooklyn, and for a time he worked on the docks there. "Gersham" was too much for some of his co-workers to handle, so he cheerfully went by "Gerry the Hebe."

Gersh would also make up a nickname for you if you looked like you wouldn't take it the wrong way. The TV show Kojak was big in those days, and one day Gersh started calling me "Bojack." That one stuck.

It seemed like everything I did in my career, Gersh had done it first. One of my first tax experiences was with Boris Bittker, a god of tax law and a saint of a mentor. Wouldn't you know it, Boris and Gersh were close friends from way back. Right after law school, I was a law clerk to Judge Ted Goodwin on the Ninth Circuit. Turns out, the judge and Gersh were good pals from their time together in Salem.

When I went off to teach law school, of course Goldstein had done that, too, long before. But I could tell that sometimes he missed those old days. There used to be a fat directory of law professors that came out every year. It was nicknamed the "stud book." Gersh wanted my expiring stud book every year, just to keep an eye on things.

His life had a lot of different dimensions. He was a proud and devoted husband (married forever to "Miss Pauline"), father, and later, grandfather. In the days we were working together, Gersh and Pauline's teenage daughter, Deborah, started going out on dates. Gersh bragged that he would take any boy who showed up at the house out on the road for a driving test before he'd let Deborah get in the kid's car.

Gersh's web of connections placed him on many boards of directors of various charities, to whom he gave countless hours. He got a bunch of plaques in retirement, but as gracious as he was in accepting these honors, he was more about the people than he was about awards.

Working for "GG" was a real education. Like all good tax lawyers, he was a stickler for detail. When he sent you to the tax library on a research project, you knew that a shallow, rushed, or half-baked analysis wouldn't be enough. Gersh already knew more than you would ever find out if you didn't pursue his questions out to the nth degree. But the best part was that he was a walking encyclopedia who would throw out a half dozen suggestions that would get you on your way to the right answers. Like many young lawyers, I got a grand tour of the ropes from him.

Early on in my days as an associate at the firm, Gersh asked me to help him write an outline for a talk he was going to give at a conference. It was about the tax treatment of installment sales. Dry as a bone! But nothing about Gersh could be boring, and so I enjoyed working on it. I learned everything I ever needed to know about the subject in just a couple of weeks. That's how it was so often in those days – how nice to get paid to learn things. And Gersh genuinely enjoyed showing us younger people around.

Goldstein's understanding of the tax law was legendary. It was on a level that few mortals achieve. Many of Portland's wealthiest and most influential people came to see him for advice. He saw everybody's wills, including people who weren't on speaking terms with each other.

IRS and state revenue agents and government lawyers were not happy to see him coming. He was a fabulous advocate for taxpayers. In one U.S. Tax Court case, he basically won for his clients the right to take depreciation deductions on land. It's a long, technical story, but trust me, you don't usually get to do that. I'm sure the clients were pleased. They should have been.

Gersh and I hit the road together a couple of times for field trips on business. We piled into his car and headed down to Salem and Eugene. I remember the car. It was a gold-colored Cadillac, with the license plate "0 TAX." We'd compare notes on the way down and back, not only about the deals we were working on, but also about the people we were representing, and the lawyers we were up against. We had a lot of laughs on those car rides. We also shook our heads in disbelief a few times.

At one point, Gersh and I were talking about a tax issue that he, personally, had. It involved a deduction that he was about to take on his personal tax return. He thought he was in the right, but he also thought the IRS might challenge the deduction. "If they ask about it," he said to me, "you're gonna be my lawyer." We both laughed, but I think he was only half-kidding. And for me, that was a high honor.

I wish that just for one lunch hour, I could be back with Gersh and Judge Goodwin in the old Dave's Deli downtown on Yamhill Street. The cook guy with the earring would yell out "Errrrr-Reuben," and Shirley would take our money. Then we'd get to sit in a booth and talk about life over what the judge used to call "Jewish soul food."

A lot of the success I've had in tax law, I owe to Gersh. He introduced me to several important people who trusted his judgment and gave me a shot in various roles. I'm sure he put in a good word for me in more places than I know.

He was a great advisor to me. He always listened closely, and asked the right questions. And when he had heard my story and thought for a minute about my issue of the day, Gersh always spoke to the best person I could be.

He was like a big brother. I can hardly believe he's gone. When that reality sinks in, there will be a huge hole where he used to be. I will miss him, as will so many others. Take care, Godfather.

Oh dear!!!!!! That is soooo sad. I am soooo sorry!!!!. Thank you for posting this. He was an awesome husband, son, father, partner, friend, leader and boss. I was his first secretary when he came from Chicago, and in our latter years, he asked for me, again. I wanted to say "no," but as God would have it, "yes" came out of my mouth. I organized him like none other. Partners came from all over the firm to witness the change. His dear wife called and thanked me, and told me he loved going to work now. He paid me to organize his home. Lunch with them, prayers in Hebrew, were very special. The firm had a bible and entrusted it in his care. His teachings were thrilling, his audience intensely astute and his experiences and expertise very highly regarded. I recall assisting him in finding needles in haystacks to further litigation. In my tax law class at Portland State, I got an "A." Of course, the professor knew who I worked for; and, while out on the town, a former IRS agent told me, "when the IRS heard his name, they went the other direction." Preparing his tax law exams for Northwestern School of Law was incredible. "Heaven help the students," I said. When I had birthday celebrations for him, he always had a "nugget" of tax law no others knew about. One day, I remarked that his office was the best office in the building. Eyes twinkling, he said, "I know," and smiled. I shall always remember his joy, love of his faith and family and profound kindness. My dear Gersham left a legacy of that which is good. My prayers reach out to his wife and daughter. He was one of a kind!!!!

Before Lexis this fellow was indispensable