July 4th, Hamilton, And The Power Of Forgiveness 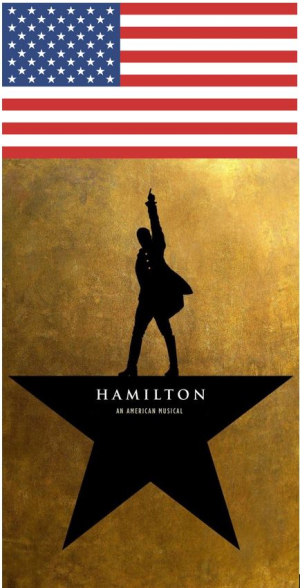 Following up on yesterday's post, Hamilton At Pepperdine And On Disney+: my wife and I watched the film version of Hamilton last night. Although we have seen the play several times, we found the film absolutely mesmerizing. The intimacy provides a close-up perspective on the actors and the choreography that is unavailable from even the best seats in a theater.

I was also struck by the film's propitious release the day before the July 4th holiday. As COVID-19 and the killing of George Floyd tear at the fabric of our country, Hamilton provides a timely challenge to all of us to think anew about the "American experiment" (Yorktown (The World Turned Upside Down)).

The Los Angeles Times review, From Broadway to Disney+, Hamilton Speaks Brilliantly to a Time of Fear and Protest, wonderfully captures this sentiment:

Disney, which acquired the film earlier this year, had originally planned an October 2021 theatrical release. But when theaters closed due to the COVID-19 pandemic, it decided to make “Hamilton” available for streaming on Disney+ more than a year early — just in time for a July 4 holiday under quarantine and, less expectedly, for our latest convulsive nationwide referendum on systemic racism and authoritarian violence. It’s hard to imagine a more receptive backdrop for a drama that ingeniously recasts the Founding Fathers as people of color, placing America’s oft-repeated “nation of immigrants” rhetoric into the most literal terms imaginable. Nor can I think of a better moment for a musical that reminds us anew that the language of hip-hop is a language of protest.

None of which is meant to suggest that this is “the film we need right now” or to burden “Hamilton” with messianic claims that the show — a celebration of a once-unsung hero and a pointed reminder of the limitations of heroism — would never make for itself. Reviewing the touring production at the Hollywood Pantages Theatre in 2017, my Times colleague Charles McNulty noted that “its embodiment of pluralism and diversity will touch anyone who longs to see America live up to its ideals,” and the same holds true of this filmed version. Miranda’s rap-sodic historical epic may not save the soul of a battered republic, but its consolations are real, its pleasures revivifying, its emotional force galvanic. Arriving at a moment of intensifying darkness, it shines a light that is both warm and persistent.

Members of our Pepperdine Caruso Law community tease me (good-naturedly, I think) about how I mention Hamilton and quote or play a clip in most speeches I give. I do so in part because, like Michelle Obama, I think Hamilton is the single greatest work of art in any form that I have seen in my life. But more than that, I think Hamilton is transcendent, brilliantly challenging us to seriously think about our human endeavor, both as individuals and as citizens.

In my introduction to Pepperdine Caruso Law's Zoom webinar on Hamilton with our alum, Federal District Judge Charles Eskridge ('90), I quoted these lyrics (as I do in my Dean's welcome) from The Schuyler Sisters:

Look around, Look around
At how lucky we are to be alive right now!
History is happening

We are lucky to be alive, not to be passive observers of history as it unfolds, but rather to play an active role in shaping that history. As George Washington tells Alexander Hamilton in History Has Its Eyes on You:

This delirious style of cultural-historical fusion is meant to leave you with as many questions as answers, and “Hamilton,” like any breathless phenomenon, has not gone unchallenged. Historians have unsurprisingly taken the show to task for its inaccuracies, and also for perpetuating the dubious aesthetics of “Founders Chic.” Some see in Miranda’s work an uncritical glorification of a Wall Street forerunner; others see a story that is considerably more progressive on race than gender. And speaking of race, perhaps the most trenchant criticism has been that “Hamilton” glosses over its hero’s ambivalent position on slavery, adding a note of dissonance, less fatal than fascinating, to the racially inclusive casting that remains its most significant masterstroke.

As I said: contradictions. And contradictions, which lie at the heart of democracy itself, are nothing to be feared. Really, they are only likely to deepen as this film turns living rooms into makeshift cinemas and auditoriums, igniting fresh admiration and dissent along the way. How could it do otherwise? It’s worth remembering that “Hamilton,” the consummate theatrical work of the Obama years, also claimed one of the earliest cultural skirmishes of the Trump era, when Vice President-elect Mike Pence attended the show in November 2016 and was personally called out from the stage. Four years later, it’s hard not to feel that “Hamilton” has never really gone away (and not only because a former national security advisor just published a controversial memoir whose title riffs on one of Miranda’s best songs, The Room Where It Happens).

Such confrontations are only to be expected from a work that not only engages with history but, through its reach and renown, becomes a part of it. One of the show’s more obvious lessons is that history is a living, breathing entity, and that the cyclical rise-and-fall narratives of leaders and empires can be studied and recounted in ways that uncover bold new patterns of meaning. This film, a solid capture of a momentous work of art, illuminates those patterns in ways both sobering and thrilling. I still hesitate to call “Hamilton” the film we need right now, partly because it deserves better than boilerplate hype. And partly because I suspect that, as with all reverberant history, its most significant work may still be ahead of it.

As individuals and as a nation, our most significant work may be ahead of us. And, I contend, Hamilton can illuminate and perhaps even guide our work. One way it can do that is through the two unanswered questions in the play and film:

After seeing the play for the first time, I was intrigued by those questions and discovered that the answer lies in Hamilton's embrace of the Christian faith in the last two years of his life. I have written (C.S. Lewis & Lin-Manuel Miranda: How I Found My Faith In Mere Christianity And Deepened It In Hamilton) and spoken (From Moses To Hamilton: A Dean’s Journey) about this before, so I won't repeat it here.

Hamilton and my faith shape the way I view the state of America, our "great unfinished symphony" (The World Was Wide Enough), on its 244th birthday.

So the actual Founding Fathers were racists, but the make-believe ones are heroic? Interesting.

From an open letter signed by Lin Manuel and others to the "white" American theater industry:

"About theatres, executive leaders, critics, casting directors, agents, unions, commercial producers, universities and training programs. You are all a part of this house of cards built on white fragility and supremacy. And this is a house that will not stand."

I'm glad I've never patronized the theater. And won't ever, since it sounds like a hotbed of the worst kind of southern racism.