Tampons And The Bar Exam

[S]trange news comes out of West Virginia and Texas. Test takers there may not bring tampons, pads or other menstrual products into the exam. Instead the bar examiners say that they will provide “feminine products” to candidates. Arizona had a similar policy, but wisely walked that back just a few days after a minor social media eruption. West Virginia and Texas should do the same.

Bar exam bans on menstrual products are discriminatory and should be lifted immediately. State boards of bar examiners, the gatekeepers for the legal profession, should be in the business of upholding the law and adopting policies that reflect its highest principles. Bans on bringing menstrual products are a form of gender bias. They are inconsistent with the legal profession’s highest and best values of providing equal opportunity. 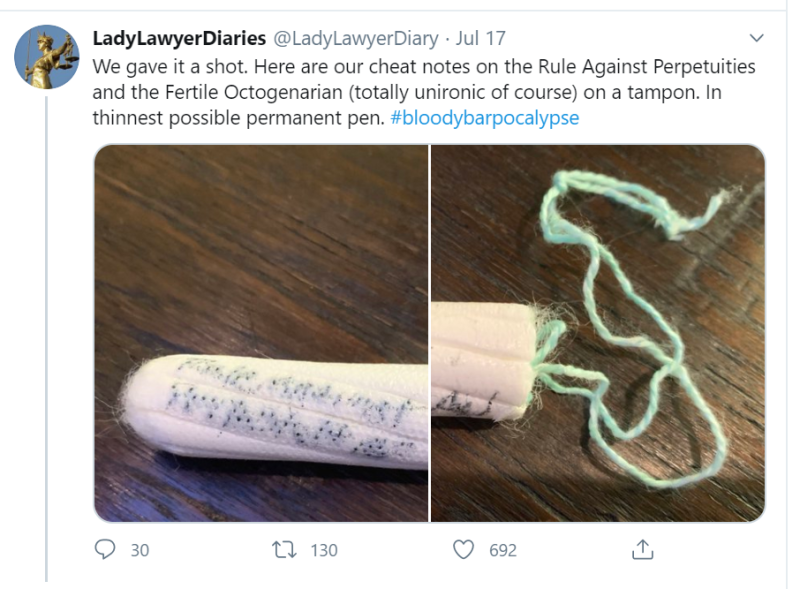 Policies like this one are a byproduct of state bars that have charged too much in bar fees (i.e. excessive rent seeking) and so they end up spending money just to employ people (i.e. kingdom building) who then perform completely useless tasks like the tampon policy. Any person who is so incompetent that they need to cheat by writing something on a tampon is likely going to fail anyways and so the policy is a waste of time, but the ban does employ one additional person on bar exam days to make feminine products available, who is almost certainly the person who had so little to do that they came up with this bright idea in the first place.

Although the article says that “bans on bringing menstrual products are a form of gender bias” and they are correct, those protesting are writing articles and submitting petitions instead of taking legal action.

That’s what I did, successfully, in some similar situations, see, e.g.,
POTTY PARITY, RESTROOM EQUITY, SQUATTERS RIGHTS
http://banzhaf.net/pottyparity.html
and here’s how I saw it is a recent article.

Texas and West Virginia (plus Arizona until very recently) have reportedly banned law school graduates from bringing tampons with them when they take the bar exam, following the lead of the Pennsylvania bar examiners who likewise banned feminine hygiene products even though such a ban may well be illegal.

California (now joined by Virginia) was somewhat more progressive, permitting tampons to be brought, provided they are displayed openly in a clear plastic bag.

As one female test taker explained, there's "nothing like writing about gender discrimination while announcing to 1,000 of your future colleagues that you’re on the rag."

Going further, a female law professor recommends, "I really wish someone would put a bloody tampon in a clear plastic bag and take it into the exam."

While these restrictions sound like overreaching if not something which is downright crazy, there is a reason for it, and apparently it was triggered by some guys who graduated from Harvard Law School around the turn of the century. One explained it this way:

"These tampon regulations are nothing new. Back in my day, we used to get so angry when girls were able to write down cheat sheets inside their tampons, then pull the little string and have all the answers sitting there between their legs. So a bunch of us fellas pushed for these tampon restrictions in the name of basic fairness."

Today, however, it's much easier to use a smart watch as a cheat sheet than a tampon.

To put an end to this type of illegal sex discrimination, those concerned and affected should take legal action, perhaps relying on some of the cases I cited.

For example, a legal complaint I filed helped force the U.S. House of Representatives to construct the first female restroom adjacent to the House floor so that female members of Congress are no longer "forced to urinate in a coffee cup" (as one report put it).

Another of my potty parity complaints - I’ve been dubbed “The Father of Potty Parity” - prompted the University of Michigan to provide a higher percentage of toilets for females than for males when it renovated its Hill Auditorium - a main goal of potty parity.

However, - unlike the potty parity, women's rights, nonsmokers' rights, LGBTQ rights, and other similar movements - this new movement (a branch of a movement known as “Period Parity”) has yet to take advantage of the tremendous but largely untapped power of legal action to both force change and, at the same time, generate publicity to educate the public about feminine hygiene discrimination.

For example, failing to provide free tampons in female rest rooms, while providing paper towels and toilet paper at no charge in rest rooms generally, could fall within a new class of court decisions I cite when I bring actions in support of potty parity.

Both decisions, by two different U.S. Courts of Appeals, held that providing exactly the same restroom facilities for men and women can still constitute illegal sex discrimination - under disparate impact, sexual harassment, and/or hostile work environment legal theories - if what is provided does not meet the special and additional needs of females, based upon what one court said are the "anatomical differences between men and women which are 'immutable characteristics,' just as race, color and national origin are."

In Texas and West Virginia, although the bar examiners have promised that feminine hygiene products will be provided in women's restrooms, there is no guarantee that the supply would not run out at a crucial time, that the dispensing devices would not jam or otherwise cease to function, or that every prospective female lawyer would find among the products which are provided one which is the kind she needs and/or is able to use.

Moreover, such a prohibition might arguably also constitute discrimination against transgender and gender non-binary law school graduates who don't use women's restrooms, but may nevertheless need tampons during the bar exam.