Manhattan District Attorney Cyrus Vance Jr. could get his chance to try for President Trump’s financial records a lot sooner after Chief Justice John Roberts on Friday granted his request to fast-track a Supreme Court ruling that Trump is not immune from criminal investigations. ... 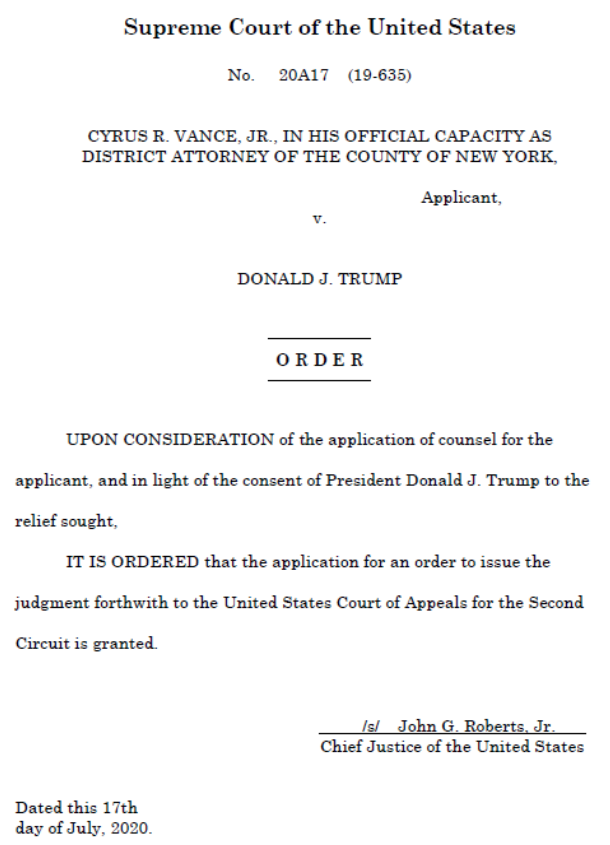 Most Supreme Court rulings take 25 days to go into effect after the court’s opinion is released, but Vance on Wednesday asked the justices to put the ruling into effect immediately, fearful that a 10-month old subpoena, issued last September, could become void if it passes the statue of limitations.

In his letter to the court, Vance warned that any delay could grant Trump the “absolute temporary immunity that this court rejected.”

The Manhattan district attorney’s office accused President Trump on Thursday of purposely dragging out a court battle over a subpoena seeking eight years of his tax returns in an attempt to effectively shield himself from criminal investigation.

Carey R. Dunne, a lawyer for the prosecutor’s office, told a federal judge that the longer the president disputes the subpoena, the higher the chance that the statute of limitations would expire for any possible crime that may have been committed.

The office is seeking the president’s personal tax returns and those of his family business, the Trump Organization, as part of an investigation into hush-money payments made in the run-up to the 2016 election. The president has been fighting the subpoena for nearly a year.

“What the president’s lawyers are seeking here is delay,” Mr. Dunne said. “I think that’s the entire strategy here.”

A bit unusual.
It's almost as if there is some sort of time pressure involved.
Makes me think of November for some reason.
Of course, none of this is political.
Trump better fight fire with fire.
The impeachment rubicon has already been crossed.