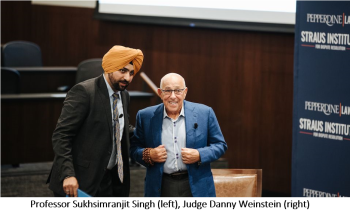 The Honorable Daniel Weinstein (Ret.) has made a generous $1 million gift to the Straus Institute for Dispute Resolution at the Pepperdine University Rick J. Caruso School of Law. The gift will be used to strengthen the academic program and global reputation of the Straus Institute, which has been ranked as the #1 dispute resolution program in the nation by U.S. News & World Report for 13 of the past 16 years.

The gift will endow the managing director position at the Straus Institute, previously held by professor of law Peter Robinson (2005–17) and held since 2017 by associate professor of law and practice Sukhsimranjit Singh. As the inaugural Judge Danny Weinstein Managing Director, Professor Singh will continue his leadership of the Straus Institute in the training of arbitrators, mediators, negotiators, problem solvers, and peacemakers whose skills have never been more needed in our conflict-ridden country and world.

Judge Weinstein’s generosity is especially notable during an economic slowdown that has affected law schools and universities of every size and type around the country. “We as a society are dealing with many crises at the moment, making Pepperdine’s mission of preparing a talented, diverse group of students to be tomorrow’s leaders and peacemakers more vital than ever,” he said. “The Straus Institute is a premier program for the training of the conflict resolvers of the future, with outstanding academics and top students from around the world. I am extremely enthusiastic about the contribution Straus is making to conflict resolution during these tumultuous times. I’m incredibly excited to be a part of it.”

Judge Weinstein is universally recognized as one of the world’s top mediators. He has mediated cases with an aggregate value of billions of dollars annually and has designed innovative processes tailored to unique, complex, and highly sensitive cases. He is one of the founding members of Judicial Arbitration and Mediation Service (JAMS), the largest provider of alternative dispute resolution (ADR) services worldwide. In 2008, he launched the Weinstein JAMS International Fellowship Program to provide ADR professionals outside of the United States an opportunity to learn about and advance dispute resolution practices in their countries and beyond. Judge Weinstein also established the Weinstein International Foundation, a nonprofit organization dedicated to making mediation available and accessible worldwide in the face of increasing global challenges and conflict.

The gift to the Straus Institute includes a commitment to expand the school’s international reach by establishing the Judge Danny Weinstein Endowed Scholars Program in Dispute Resolution. This program will bring international students to Pepperdine for a certificate or master’s degree in dispute resolution. Preference will be given to fellows in the Weinstein JAMS International Fellowship Program.

“We are humbled by Judge Danny’s generosity and his faith in the Straus Institute’s leadership in dispute resolution,” said Paul L. Caron, Duane and Kelly Roberts Dean of the Pepperdine Caruso School of Law. “As one of the world’s leading mediators who has strong roots in California, he is a treasured partner in our mission to train current and future leaders in this vital field.”

All of the credit goes to Professor Sukhsimranjit Singh and Rebecca Malzahn, who did a fantastic job in shepherding this gift. We are proud that this is the seventh gift, pledge, or payment of $1 million or more to Pepperdine Caruso Law over the past three years totaling over $75 million: