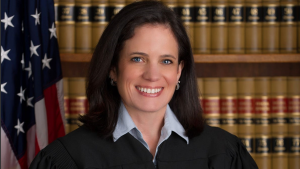 The three judges on the panel began the discussion by describing their experiences on the federal bench during the COVID era. Judge Dorsey spoke of the Nevada federal courts, which began to close in mid-March. Criminal and civil proceedings continued via video and teleconferencing, which was authorized by the CARES Act. In June, some matters were resumed in the courthouse, with social distancing and a court-wide mask mandate. Most proceedings, however, are still taking place remotely.

Judge Birotte remarked that the Los Angeles courts, which were completely closed to the public beginning on March 13, are now opening in phases. Phase I of the reopening began three weeks ago with some staff returning to the courts. There have been no in-person hearings and all criminal cases have been handled by video conferencing.

Judge Eskridge commented that the Houston courts closed in late March, which was less than four months after he was confirmed to the bench. A soft reopening of the Houston courts occurred in June for filings only. It was initially decided that no trials would begin that require empaneled juries until August, but that timeline has been rescheduled to after Labor Day.

Judge Eskridge noted, with Judges Dorsey and Birotte agreeing, that lawyers are to be commended during this time for their spirited cooperation and empathetic collaboration. The judges acknowledged that the current unprecedented situation has brought out the best in the legal profession.

Judges Dorsey, Birotte, and Eskridge then turned to answering questions that included their advice to incoming law clerks, how to be effective advocates, the handling of sensitive information, and changes in cases settling, in-person depositions, and the number of COVID-related lawsuits. The three judges do not foresee any changes in externship and law clerk hiring, and Judge Dorsey offered helpful tips for students regarding job candidate interviews over zoom. They also stated that future law clerks should plan to be nimble and comfortable with circumstances changing constantly. The judges noted that the biggest issue they see moving forward will be empaneling a jury.

The three judges agreed that the biggest opportunity right now for the judiciary is the abandonment of the "That's how we've always done it" philosophy. Judge Dorsey conveyed that the embrace of technology has advantages such as allowing criminal defense attorneys to better communicate with the people they represent. Judge Birotte indicated that video and telephonic hearings are not only an efficient way to deal with matters, but are also a savings for the client and government. Judge Eskridge related that zoom and video conferencing have become the new normal, which is a technological advancement that his friend and classmate Judge Beverly Reid O'Connell advocated 10 years ago and would be pleased to see in practice today.

Pepperdine Caruso Law thanks our distinguished alumni judges for their invaluable insight.

A full recording of the event will be available soon on the Pepperdine Caruso Law channel here.