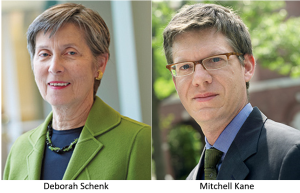 It is my great privilege to assume the position of editor in chief of the Tax Law Review beginning with this issue. ... The current reputation of the Tax Law Review can essentially be credited to a single person-my predecessor, Professor Deborah Schenk, Ronald and Marilynn Grossman Professor of Taxation Emerita. I do not think I am overstepping bounds if I venture here to speak not only for myself but also on behalf of my tax law colleagues at NYU Law, and indeed on behalf of the entire tax legal academy, in thanking Professor Schenk for her brilliant leadership of the journal over the past many years. How many years? Interestingly, I asked a reference librarian at NYU Law to find the answer to that question, so I could note it here. The answer appears to be, "more years than one can easily count," as Professor Schenk's editorship was so long running that it predates the time when a masthead first appeared in the journal. In a construction that might appeal to tax lawyers, we can safely say that the period of Professor Schenk's editorship was "not less than thirty years." ... Professor Schenk edited more than 100 issues of the journal during her tenure. In honor of Professor Schenk's contributions, we will be publishing a tribute to her, scheduled to appear in Volume 73.

My chief goal moving forward is to live up to the very high standards that Professor Schenk has set for the journal. Within those bounds I have adopted a few changes to the editorial model.

First, I have restructured the Faculty Editorial Board. It has been a feature of the Tax Law Review to have an advisory board since the inaugural issue. And the masthead under Professor Schenk's leadership continued to list NYU Law tax faculty as members of the Faculty Editorial Board. In truth this designation should be acknowledged as the mere honorific that it was, as Professor Schenk, with great devotion and excessive respect for the time of her colleagues, single-handedly undertook responsibility for article selection and peer editing. Consistent with the journal's commitment to peer review, I have adopted formal voting rules, such that offers of publication now require an affirmative vote of the Faculty Editorial Board, rather than a unilateral vote of the editor in chief. This will allow us to draw upon the broad expertise of the faculty in article selection; for those articles that are given offers, it will also create a compendium of peer-generated evaluation and comment that will feed into the editing process. I would like to thank Professors Lily Batchelder, David Kamin, and Daniel Shaviro for generously agreeing to take on this expanded role of peer review as members of the Faculty Editorial Board.

Second, at the student level the Tax Law Review has historically relied exclusively upon LLM editors in the Graduate Tax Program. I have for the first time opened up editorships to 2L and 3L students pursuing their JD degrees. It is my hope that expanding membership in this way will allow all students partaking of the rich tax law offerings at NYU Law to become involved in the journal and enjoy the many pedagogical benefits that accompany membership.

Third, and with some regret, beginning with Volume 72, the Tax Law Review will publish two issues per year (Fall and Spring), rather than four. Even with four issues per year we received many more quality articles than we could publish. Scarcity of spaces will now be even more acute, and I do not look forward to having to turn down many worthy articles.