Lesson From The Tax Court: Being Too Smart Precludes Innocent Spouse Relief 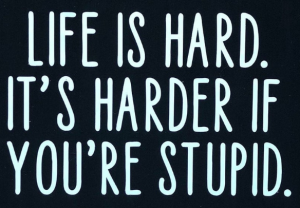 Growing up, I was taught to value intelligence.  My dad even had a sign in his office like the one to the right: his read “life is hard, especially if you’re stupid.”

Details below the fold.

Law: The Knowledge Requirement for Spousal Relief
Section 6013 permits spouses to file a joint return.  Doing so, however, means spouses are jointly and severally liable for the taxes owed on a jointly filed return.  Section 6105 permits spouses to obtain relief from that joint liability.  It provides three avenues of relief. First is the traditional innocent spouse relief. You find that in subsection (b).  Second is the relief found in subsection (c). The idea that there is that a divorced or separated taxpayer can unwind prior joint returns to allocate the liability proportionately between the spouses. Third is a kind of catchall provision. Subsection (f) allows relief if “taking into account all the facts and circumstances, it is inequitable to hold the individual liable.”

Today’s lesson involves just the knowledge requirement for relief under subsection (b) and (f). For a more complete background on section 6015, see my prior blog post “100th Lesson From The Tax Court: The Role of Innocence in §6015 Spousal Relief," (Oct. 21, 2019).

Knowledge and §6015(b).  To get relief under §6015(b), a spouse must be innocent of knowledge about the item giving rise to the understatement of tax.  Subsection (b)(1)(C) provides relief is available only when the requesting spouse “did not know, and had not reason to know, that there was such understatement.”

The courts interpret that language to mean knowledge of the facts and not knowledge of the law.  In the leading case of Cheshire v. Commissioner, 282 F.3d 326 (5th Cir. 2002), the taxpayers had a premature IRA distribution of $199,771 but reported only $56,150 of it as income because they had used the rest to pay off their home mortgage.  The requesting spouse claimed that she had asked her husband about whether that was proper and he had assured her it was, based on advice he said he had received from an accountant.  Relying on that, she signed the return.  Both the Tax Court and the Fifth Circuit found that she did not meet the requirements of 6105(b)(1)(C) because she knew about the distribution and what it had been used for.  Her knowledge of the law was not the kind of knowledge that mattered.  Wrote the Fifth Circuit:

“Appellant fails to satisfy § 6015(b)(1)(C) because she had actual knowledge of the retirement distributions and of the corresponding earned interest at the time she signed the return.  ...because Appellant knew all the facts surrounding the transaction that gave rise to the understatement, including the amount of the retirement proceeds, the account where the proceeds were deposited and drawn upon, the amount of interest earned on the proceeds, and the manner in which the proceeds were spent, Appellant had "reason to know" of the improper deduction as a matter of law. Appellant's defense consists only of her mistaken belief that money spent to pay off a mortgage is properly deductible from retirement distributions. Ignorance of the law cannot establish an innocent spouse defense to tax liability.”

Knowledge and Subsection (f).  Subsection (f) is a pretty wide-open facts-and-circumstances test.  The IRS has created a 3-stage review process in Rev. Proc. 2013-34.  The first stage sets up what the Rev. Proc. calls “threshold conditions.”  They create a screen for some of the most common reasons that kill any equitable claim to relief.  For example, one threshold requirement is that there not by any transfer of assets between the spouses “as part of a fraudulent scheme by the spouses” to avoid payment.  If there is, the IRS will deny the request, period.

The third stage consists of seven non-exclusive factors.  None are solely determinative of an outcome. The list is undoubtedly a useful way to organize thinking.  While a mere Rev. Proc. is not binding on the Tax Court, I cannot recall a case where the Tax Court has not used the Rev. Proc. or the factors.

The seven factors reiterate some of the factors used in the first and second stages.  They come back in now with indeterminate weight.  The factor I will focus on today is “knowledge or reason to know.”  This is just like the knowledge requirement for subsection (b) relief in that it looks to see whether “the requesting spouse knew or had reason to know of the item giving rise to the understatement.”  That is, if focuses on knowledge of the facts, not knowledge of the law.  And the most difficult part of this factor to overcome is the “reason to know” part.  Courts repeatedly tell us that §6015 relief “was not designed to protect willful blindness or to encourage the deliberate cultivation of ignorance.” Friedman v. Commissioner, 53 F.3d 523, 525 (2d Cir. 1995).

Another important factor is economic hardship.  There are times where even though the requesting spouse had reason to know of an item giving rise to an understatement, it might still be appropriate to grant relief because pursuing collection would “cause the requesting spouse to be unable to pay reasonable basic living expenses.” Rev. Proc. §4.03(2)(b).

Facts: The Spouse Who Knew Too Much
It’s hard to be humble when your smart.  Mr. and Mrs. Rogers’ tax problems arose from a mixture of hubris and greed.  Mr. Rogers, a Harvard educated tax attorney, developed a series of too-good-to-be-true tax strategies in the late 1990s involving distressed Brazilian debt and multiple sham entities all connected to a company he controlled called Sugarloaf Fund LLC.  He not only sold the strategies to clients, he and Mrs. Rogers also participated in the strategies over a number of years. Eventually, the IRS caught on, listing the strategies as tax shelters in 2008.

Parallel with Mr. Roger’s fight on the merits, he and Mrs. Rogers pursued claims for spousal relief for her for the various years affected because, as Judge Posner put it in the 2013 opinion, "she appears to have had nothing to do with the shenanigans that gave rise to the deficiency."

Mrs. Rogers is a really smart person. First, to say she is highly educated is an understatement.  Heck, she almost has more letters after her name than in her name.  She holds a B.S. (Chemistry), an M.S. (BioChemistry), an M.B.A., a Ed.D. and an J.D.  In addition to all those degrees, she took multiple tax and accounting classes at a local community college, and obtained a real estate broker’s license.  Second, she put all this learning to work in a long and varied series of successful careers: teaching high school science; becoming a high school administrator; managing her husband’s law firm operations after he had a medical crisis in 2009; creating a business of preparing property tax appeals; selling real estate; developing some 100 acres of land outside Chicago into a high-end residential subdivision called Sterling Ridge. This is one smart and capable woman.

For the years at issue (2010-2012), Mr. Rogers prepared their joint returns and reviewed them with Mrs. Rogers.  The IRS audited all the years.  The taxpayers did not contest the NOD for 2011.  For that year Mrs. Rogers filed a stand-alone petition for spousal relief.  The taxpayers did, however, contest the 2010 and 2012 NODs and raised a spousal relief claim during the deficiency proceedings.  They lost on the merits of the deficiency in Rogers v. Commissioner, T.C. Memo. 2019-90.  However, Judge Goeke considered the spousal claims for all three years in a separate proceeding.  That is the opinion for this lesson.

Lesson: Smart People Are More Likely To Have “Reason To Know”
Mrs. Rogers did not have many of the seven factors listed in Rev. Proc. 2013-34 running in her favor.  First, she is rich.  The total tax liabilities appear to be between $1m and $2m (it’s hard to say since the 2011 year amount is not disclosed in the opinion).  Mrs. Rogers reported that she owned assets of over $8.1 million.  She also reported total monthly income of over $15,000 compared with a claimed $12,000 of expenses (gotta say, though, that the $2,250 in “child and dependent care” jumped out at me because, as Judge Goeke notes, the Rogers were each 78 years old at the time of trial).  So the economic hardship posed by collection would not be unfair.  Second, she had a good marriage.  That means there was no abuse lurking in the background that would influence any other factor.

The only factor that Mrs. Rogers really could push was knowledge.  And on that she pushed hard.  She argued that she totally relied on Mr. Roger’s tax savvy and “repeatedly sought assurances from John that he was reporting all items correctly.” (emphasis added).  The various tax strategies were so complex that she could not fathom them herself and so “had no reason to second-guess John’s tax reporting positions.”  As one smart person, she had faith in another.  She testified at trial that “I figured that at some point he’d win.”  She figured wrong.

Mrs. Rogers faith and loyalty are touching.  The Rogers are apparently still married after more than 53 years. But faith and loyalty are not factors in obtaining spousal relief under §6015. Knowledge matters. And what counts as knowledge is not only what a requesting spouse actually knew. What also counts is what the requesting spouse should have known.  And that, dear readers, depends on how smart you are.

Here, given her smarts, Mrs. Rogers should have known something was amiss when presented with the 2010, 2011 and 2012 returns.  Her reliance on her husband was no more appropriate than Mrs. Cheshire’s reliance on her husband.  She knew he was litigating the legitimacy of his tax strategies and she knew he had already lost.  Judge Goeke writes, “she had sat through months of trials involving Mr. Rogers tax schemes in her own joint liabilities during the preceding decade.” Op. at 19.  By October 4, 2011 she also knew he had thrown in the town and agreed to accept an injunction barring him from promoting the very strategies that had created the problems in their return.

The bottom line, as Judge Goeke writes, is that while her love for and devotion to her husband was admirable, her decision “to ignore the facts and circumstances she well knew on an intellectual level is not a lack of knowledge or purposes of section 6015(b)(1)(C) and (D) and (f).  We have explained Mrs. Rogers’ education and her thirst for knowledge. Her willingness to set aside her intellect to support Mr. Rogers does not cause her to be eligible for relief from her joint tax liabilities.”

Coda:  Judge Goeke also noted that the couple had engaged in transactions which looked a lot like asset protection transactions.  Specifically, he writes, “[i]f Mrs. Rogers is granted innocent spouse relief, then she and Mr. Rogers have effectively hindered possible collection avenues since all their assets are in her name only and potentially all could be eventually transferred to trusts under the names of her son and/or granddaughter.”  If he had found that those transfers were done “as part of a fraudulent scheme” then that would knock out her request under the first threshold screen in Rev. Proc. 2013-34.  A mere transfer, however, is not automatically fraudulent and here Judge Goeke made no finding of fraud.  However, it appears that the transfer might nonetheless be properly put into the scales. Mrs. Rogers was too smart not to know the effect of the transfers.  Thus, even if the transfers were not fraudulent it is not unfair to deny relief to someone who has likely accepted assets as a nominee.

Bryan Camp is the George H. Mahon Professor of Law at Texas Tech University School of Law.  He invites you to come back every Monday for another Lesson From The Tax Court.