Americans are very generous people, and they give despite the reduced tax benefits of giving. That’s the takeaway from Giving USA’s latest annual report on the charitable contributions of individuals, corporations, and foundations. Altogether, Americans contributed nearly $450 billion to charitable causes in 2019. This is a record level of giving in nominal terms; adjusting for inflation, it is the second-highest amount ever after 2017.

Of the various donor types, individual donors were the most generous. They contributed about $310 billion to charitable causes in 2019, also a record amount in nominal terms. This was not supposed to happen according to many in the charitable community who predicted that the Tax Cuts and Jobs Act (TCJA) would lead to less charitable giving. 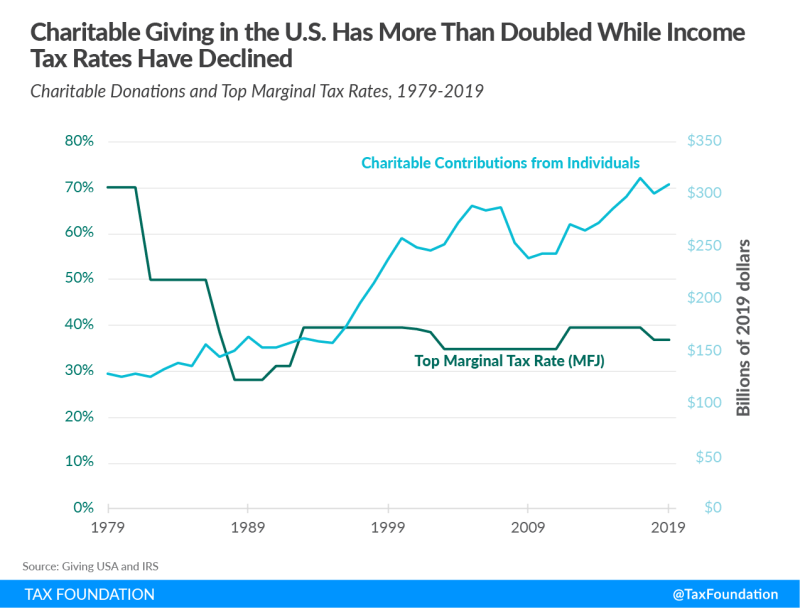 This chart shows the changes to the top marginal tax rates for married couples since 1979 contrasted to the growth in charitable giving adjusted to today’s dollars. After a dramatic drop during the 1980s from 70 percent to 28 percent, the top individual tax rate has hovered between 35 percent and 39.6 percent for the past three decades. While tax rates have declined, we can see that charitable giving has more than doubled in real terms since 1979, from $129 billion to $310 billion today. There would seem to be an inverse correlation between tax rates and giving: lower rates mean increased giving.

"As the head of a nonprofit tax policy think tank, I don’t think it makes economic or moral sense to keep tax rates high just to induce people to be charitable."

Did anybody *ever* make such a suggestion? Not that I know of.

Gerald: "Did anybody *ever* make such a suggestion?"

This study is consistent with the experience of the 1986 Tax Reform Act, which cut rates and limited itemized deductions. The same predictions were made then that charities were sure to be hard hit, but it didn't happen.

MM: The article did *not* suggest what you say it suggested. It simply forecast lower charitable giving resulting from fewer peope using itemized deductions. A huge, huge difference from the sentence I quoted.

Gerald: "The article did *not* suggest what you say it suggested."

Quoting from the PBS article: "My colleagues and I expect giving to be reduced chiefly through two of the tax plan’s key features - significantly boosting the standard deduction and cutting the top marginal tax rate."

That second part is literally what you said nobody said about the change in tax law, in your very first comment above.

Don't give up your day job, unless it involves economics and/or reading comprehension.

I don't expect you to respond to your totally erroneous statements, by the way.