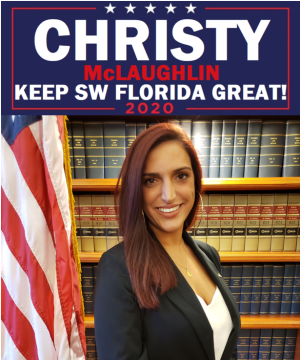 A former Florida beauty queen sued a law school and the Department of Education for $25 million claiming the university expelled her because she supports President Trump.

Christina McLaughlin launched the 114-page legal complaint Thursday against Florida International University School of Law and the Department of Education. She never failed a class, yet she was dismissed for failing to meet academic standards, she said. ...

“This complaint is to help protect other students who have had their voice silenced by liberal universities and colleges,” said Ms. McLaughlin, 24, who also is running as a GOP candidate for a House seat in South Florida. ...

In Ms. McLaughlin’s case, she said professors learned about her Republican affiliation from social media photographs after she attended a Trump victory party. She said instructors immediately began treating her differently — including not answering questions she would pose to them after class.

Ms. McLaughlin went on to graduate from another accredited law school in Florida but said her formal complaint filed two years ago about the treatment from FIU went unanswered by the Department of Education. She said she’s incurred tuition expenses, lost internships and suffered from attempts at delaying her legal career.

Law schools should really start looking at ABA Accreditation 501(b) as a floor, not a ceiling.

The complaint is the most ludicrous thing I’ve ever read. This girl clearly couldn’t cut it in FIU Law, which is the top scorer on the Florida Bar time and time again. The proof is in the pudding. She went to another law school, graduated but didn’t pass the bar. It’s time she realizes they were right and it wasn’t because of politics, it was because of lackluster performance, which evidently continued. And the best part- her mother is her attorney- no wonder the complaint is full of conspiracy theories of the “deep state” and crazy right wing mentality that everyone is out to get her!

So she is suing the Board of FIU law, including board member And former dean Alex Acosta - Trump’s former Labor Secretary and former AUSA - because the school does not like pro-Trump people?

Here's the key allegation of the complaint: "Ms. McLaughlin maintained a GPA of 2.2 throughout her 1L year until the day of her academic expulsion on May 19, 2017." Does anyone teach at a school that allows a student with a GPA of 2.2 to remain?