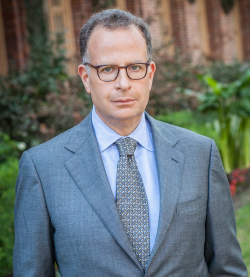 A couple of things set Ed Kleinbard apart from the army of tax experts who spend their hours delving into the minutiae of tax law.

For one thing, he was smarter than most of the others. But more important, having developed his store of knowledge at an elite corporate law firm and then as a top congressional advisor, he chose to deploy it in the public interest — as a professor of law at USC, as a widely-read commentator on tax policy and as the author of an indispensable book on how to make fiscal policy function for the betterment of American life.

Kleinbard died Monday at 68, following a long battle with cancer. He had been my guide through the thickets of tax policy since I first profiled him in 2014 and a source for dozens of columns since then. He was always gracious, lucid and amusing when I pestered him for his insights, even during his bouts with illness toward the end. His passing will be profoundly felt by his family, his colleagues, my readers and a world that is immeasurably poorer for the loss.

We can begin with his career trajectory. After graduating from Yale Law School in 1976, he moved into corporate law, rising to a partnership at Cleary Gottlieb Steen & Hamilton. In 2007 he jumped to the public sector as chief of staff to the Congressional Joint Committee on Taxation, then joined USC’s Gould School of Law in 2009.

“Only people who are practicing law at a very high level know exactly how corporations do things like move income around to minimize taxes and the other tax games major corporations play,” says Kleinbard’s friend, cycling companion and USC Law colleague Gregory Keating. “And most of the people who have that kind of knowledge are working with the companies. Ed had that expertise and was committed to coming up with solutions as an academic and a policy person that were public-spirited and public-minded.”

Coupled with that was an engaging persona that his colleagues remembered as “funny, loyal, passionate, and acerbic,” as Daniel N. Shaviro of NYU Law School put it in a valedictory on the TaxProf blog.

Ed Kleinbard bequeaths us a standard of public spiritedness that all those who have learned policy-making and the law from the inside should aspire to.

Ed insisted that restoring opportunity and the underlying fabric of our society will require significant investments in public education, social insurance (especially health care), and infrastructure.  The benefits of progressive expenditure policies outweigh those of progressive income taxation alone, justifying reliance on a more efficient and diversified tax structure.  Though Ed is sadly no longer with us, the wisdom of his scholarship will hopefully help shape future reforms.