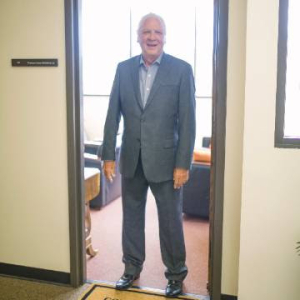 Earlier this summer, our law community mourned the loss of our beloved professor Jim McGoldrick. In the wake of his passing, members of the Pepperdine Caruso Law family joined together to honor his legacy of almost 50 years of service to the school. As a result, the Jim McGoldrick Memorial Law Scholarship was created and will be used to provide scholarship support to students in need.

Additionally, those who were closest to Professor McGoldrick sought to honor their departed friend by organizing an effort to permanently name his office at the school the James M. McGoldrick, Jr. Office. Amongst the organizers were Professors Harry Caldwell, Colleen Graffy, Anthony Miller, Ed Larson, and Steve Schultz. Together, they raised over $30,000 to support the office naming in just under 5 hours. "We are deeply moved by the efforts of the Pepperdine Caruso Law community coming together to honor Jim in such a significant way," said Harry Caldwell, professor of law and longtime friend of Professor McGoldrick. "He will be dearly missed and remembered always."

Funds raised for the naming of Professor McGoldrick's office will be designated to his scholarship.