State by state, neighborhood by neighborhood, black families pay 13 percent more in property taxes each year than a white family would in the same situation, a massive new data analysis shows.

Black-owned homes are consistently assessed at higher values, relative to their actual sale price, than white homes, according to a new working paper by economists Troup Howard of the University of Utah and Carlos Avenancio-León of Indiana University.

Dorothy Brown, an Emory University law professor who researches systemic racism in tax policy and was not involved in this study, sees the same pervasive effect. “The structure of the property tax system operates to disadvantage black Americans,” she said. “That’s how structural racism is. It’s built into the system. The property tax system itself discriminates against black Americans.”

We use panel data covering 118 million homes in the United States, merged with geolocation detail for 75,000 taxing entities, to document a nationwide “assessment gap” which leads local governments to place a disproportionate fiscal burden on racial and ethnic minorities. We show that holding jurisdictions and property tax rates fixed, black and Hispanic residents nonetheless face a 10–13% higher tax burden for the same bundle of public services. 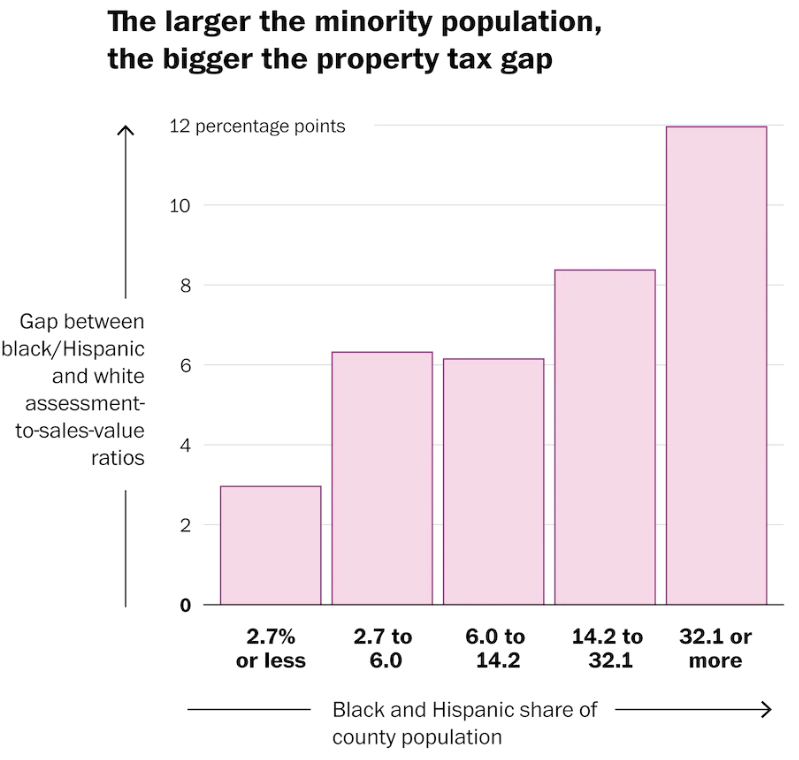 This assessment gap arises through two channels. First, property assessments are less sensitive to neighborhood attributes than market prices are. This generates racially correlated spatial variation in tax burden within jurisdiction. Second, appeals behavior and appeals outcomes differ by race. This results in higher assessment growth rates for minority residents. We propose an alternate approach for constructing assessments based on small-geography home price indexes, and show that this reduces inequality by at least 55–70%.

Diogenes: I agree this is masturbatory scholarship and total bunk, but I must again defend TaxProf Blog. This blog is fair to both sides of the aisle and must publish the good scholarship as well as the bad scholarship, to fully inform its readers. TaxProf Blog should not be in the business of verifying scholarship. Because what if TaxProf gets it wrong? Then nobody that uses TaxProf to keep abreast would ever know of that scholarship that was omitted (but that was actually correct).

"Black Families Pay Significantly Higher Property Taxes Than White Families." You should be ashamed for "publishing" this. As the other comments reflect, just race pandering bullsh*t. If you don't have better things to do with your time/blog, get a real job.

@Mike Livingston. I'd reconsider the "sad to watch Taxprof" part. Taxprof is actually a lot more evenhanded than all the other blogs in terms of publishing stuff that cuts in favor or against both sides of the aisle.

Did this data consider the political party of the community? Probably not. Black home owners disproportionately live in cities dominated by corrupt Democratic political machines going back decades. Chicago, for instance, hasn't elected a Republican mayor since 1927, the year Lindberg flew across the Atlantic. Property taxes are political and local. If the taxes paid by black homeowners are disproportionately high, it's because they've elected the very politicians who impose those taxes. What they've sown, they're reaping. It's hard to stir up much sympathy for them.

These are not analyses. These are an organized campaign to convince people that i. COVID is the end of the world and II. Everyone in the United States is a racist, so that a candidate who never departs from his basement can be elected President. It’s sad to watch Taxprof and everyone else buy into this.

Is this is causation is this a result of deliberate racial animosity or just how historically things have worked out?

Causation or correlation?
Do the study over using 2016 Presidential election results, by county.
Nice start, but much more work to be done.

“for the same bundle of public services.”

I’m getting sick of this pseudoscientific junk research.

Also, I read somewhere that median property tax bills range from as low as $200 per year up to $10,000 across the nation.

In rural and ex-urban areas, that disparity doesn't amount to much of anything in actual dollars.

Very good comments by others, but I'll just add:

And doesn't this blow a hole in those gentrification arguments? Higher assessed home values would go along with higher home appreciation, which is for many Americans the single greatest wealth generator, when they decide to move.

Everyone is entitled to an accurate assessment of property value. In California, this is simply purchase cost plus 2 percent per year, compounded. That formula leaves almost no room for gaming the system.

In other states, the defects need to be addressed. However the government should not attempt to offset different rates of appeal by race. Otherwise it creates a presumption that some groups will appeal regardless of merits and it penalizes them for not appealing. This is analogous to college admissions staff assuming that affluent parents paid for SAT coaching when the applicant was never coached. These attempts to equalize results waste resources while they amplify the disparity rather than mitigating it.

I know I'm being lied to or misled here. I'm not bothering to read the articles.

Assessment values are meaningless. Show me cookie cutter houses or townhomes assessed at different values in the same subdivision based on race.

Otherwise, this is most likely just another wage gap hoax.

I don't have time to go through seventy-nine pages of what seems to be more college professors needing publishing and wanting to make names for themselves by looking for racism and, shockingly, discovering it exists where no one else would expect -- from tax assessments that are computer generated based upon construction and market data that has no racial indicators. However, I will make a couple of points.

(2) Regarding "black families pay 13 percent more in property taxes each year than a white family would in the same situation," how hard is it to go into an assessor's office and say, "Hey, the white guy next to me has the same basic house that I do, and I want what he's paying."