What The Bible Has To Say About Black Anger: 'The Cross Helps Us Make Sense Of The Lynching Tree'

New York Times op-ed:  What the Bible Has to Say About Black Anger, by Esau McCaulley (Wheaton; author, Reading While Black: African American Biblical Interpretation as an Exercise in Hope (2020)): 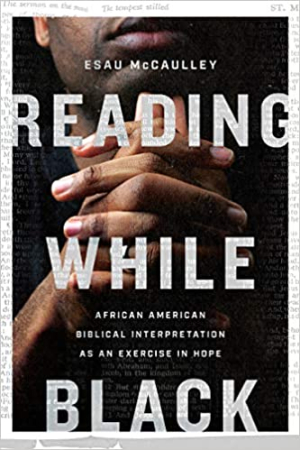 When these videos [of the killings of Ahmaud Arbery, George Floyd, Eric Garner, and Tamir Rice] stack one upon another and are added to our personal slights, a deep unsettling anger rises in the soul of a disinherited and beleaguered people. James Baldwin said, “To be a Negro in this country and to be relatively conscious is to be in a rage almost all the time.” ...

The Bible is not silent about the rage of the oppressed. One of the most startlingly violent passages in the Bible comes from the lips of the disinherited. In Psalm 137 the psalmist says, “Daughter Babylon, doomed to destruction, happy is the one who repays you according to what you have done to us. Happy is the one who seizes your infants and dashes them against the rocks.”

How can wishing such an atrocity be in any sense a religious text? Psalm 137 is a psalm of the traumatized. It depicts the aftermath of the destruction of Jerusalem, the sack of the city, sexual assault and brutalization of the innocent. What kind of song do you write if you are forced to watch the murder of your wife, your child, your neighbor? Psalm 137 is trauma literature, the rage of those who lived. ...

The miracle of the Bible is not that it records the rage of the oppressed. The miracle is that it has more to say. The same texts that include a call for vengeance upon Israel’s enemies look to the salvation of its oppressors. Isaiah 49 says, “It is too small a thing for you to be my servant to restore the tribes of Jacob and bring back those of Israel I have kept. I will also make you a light for the Gentiles, that my salvation may reach to the ends of the earth.”

For Christians, rage (Psalm 137) must eventually give way to hope (Isaiah 49). And we find the spiritual resources to make this transition at the cross. Jesus could have called down the psalms of rage upon his enemies and shouted a final word of defiance before he breathed his last. Instead he called for forgiveness: “Father, forgive them, for they do not know what they are doing,” he says in Luke 23.

It was not a false reconciliation: Jesus experienced the reality of state-sponsored terror. That is why the black Christian has always felt a particular kinship with this crucified king from an oppressed ethnic group. The cross helps us make sense of the lynching tree. ...

Resurrection hope doesn’t remove the Christian from the struggle for justice. It empties the state’s greatest weapon — the fear of death — of its power.

Hope is possible if we recognize that it does not rule out justice. It is what separates justice from vengeance. Howard Thurman wrote in his classic work “Jesus and the Disinherited” about how rage, once unleashed, tends to spill out beyond its intended target and consume everything. The hatred of our enemy that we take to the streets returns with us to our friendships, marriages and communities. It damages our own souls.

Christians contend for justice because we care about black lives, families and communities. We contend for reconciliation after the establishment of justice because there must be a future that is more than mutual contempt and suspicion. But justice and reconciliation cannot come at the cost of black lives. The only peaceful future is a just future. And because Christians should be a people for peace, we must be a people for justice even when it seems ever to elude us. Too many black lives have been lost to accept anything else.