Tallahassee Democrat op-ed:  In Minneapolis or Tallahassee, People Of Color Are Arrested While the Wealthy White Walk, by Jason Solomon (Stanford): 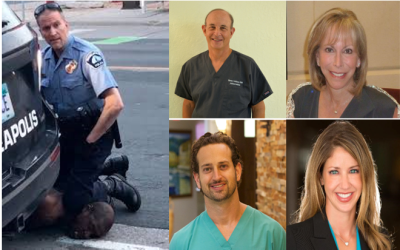 Minneapolis, 2020: A man is suspected of using a counterfeit $20 bill at a grocery store. The police are called. The story of the killing of George Floyd is now well-known.

Tallahassee, 2014: Two hitmen murder FSU law professor Dan Markel in broad daylight in Betton Hills. Upon their arrest, police reveal that their only link to Markel is that one of them has children with Katie Magbanua, then-girlfriend of Markel’s ex-brother-in-law, Charlie Adelson.

When interviewed by police, Markel’s ex-wife Wendi Adelson says her brother Charlie had talked about hiring a hitman to murder Markel. This is corroborated by testimony of one hitman; and in the 2019 trial, the prosecutor and defense agreed they believed Charlie and his mother Donna were involved in orchestrating Markel’s murder.

Six years later, neither Charlie Adelson — a wealthy white South Florida dentist — nor his mother has been arrested, while the three who have been arrested are all poor people of color.

This is the two-tiered system of justice we have in the United States — a system that brutally punishes poor people of color, while treating with kid gloves the white and wealthy.

Rob: I paint with a broad brush, but it's nothing personal. I've lived too long in a deep blue state where my elected representatives essentially do that every day to the 30-40% of residents who don't vote for them.

When are you going to address the facts that have been laid out here?

I can only conclude that you, like BLM and the press and the Democratic Party, don't think Tony Timpa's life mattered at all.

If you did, you'd have said so by now.

MM: "Voters are paying attention nationwide." They sure are, and Trump's negative ratings go higher every day.
Anon: "Facts are bothersome things." Not to me they aren't. Are they to you?

I consider myself on the Left, and yet I actually appreciate the voice of reason and the objective scan you bring to the subject. So, don't lump us all into one category, either, please. ;-) (And by the way, as a native Texan who still follows news in my home state, the case of Tony Tampa leapt immediately to mind, as well).

Correction: It's a racist stereotype common to white, female leftists these days. I observed on the news one such hysterical example screaming in the face of a black cop, claiming he was part of an oppressive, racist system. She also said she didn't believe he was even married to a black woman.

Keep letting it all hang out. Voters are paying attention nationwide.

Gerald "Hadn't realized that one of the officers involved in Floyd's death was in fact black."

And another is Asian. But leaving aside the other points I made that you've conspicusouly avoided addressing, why don't you just admit it: Whenever you hear about the killing of a black suspect, you just assume the police officers involved are always white?

This is a very common and racist stereotype amongst leftists these days, particularly white leftists.

Hadn't realized that one of the officers involved in Floyd's death was in fact black: https://www.nytimes.com/2020/06/27/us/minneapolis-police-officer-kueng.html?action=click&module=Top%20Stories&pgtype=Homepage

John: "when the system is forced by the glare of public scrutiny to work in ways it would not ordinarily"

At the risk of repeating myself, you'd have to conclude that George Floyd's life mattered far more than Tony Timpa's, who was killed in almost identical circumstances, and was also caught on video, and none of the officers involved were held to account for their actions. I'm not seeing the "systematic racism" in the former case, given that the latter case was never elevated to the "glare of public scrutiny."

"Is there *any* area where we don't have a two-tiered system?"

Please name those two tiers. And if you say "black" and "white", which is evidently how you view the world, exclusively, I'd like an explanation as to why none of those tiers are Asian, for example, or Jewish. I'd really like to understand the logic behind your sloganeering.

"The officers involved aren't 'white or otherwise'; they're white."

Let me get this straight, you're labeling Officers James Kueng and Tou Thao "white"? That's fascinating, you're clearly following the story quite closely, huh?

Only if you ignore cases like like Andrew Thomas, Brandon Stanley, Daniel Shaver, Dylan Noble, Jeremy Mardis, Michael Parker, and Tony Timpa. I could continue to rattle off many, many, *many* more names thanks to the Washington Post, the list of young white men killed by the police is longer than any other group, but I'll just cut to the chase: Did their lives matter, in your opinion?

Because their cases never made national headlines. The press never cared, nor did BLM, and there were no protests on their behalf, let alone rioting, looting, and wholesale destruction of the communities they lived in.

"...George Floyd's death is still being investigated, and the officers involved, white or otherwise, may face very steep prison sentences when the system is allowed to work."

MM: 1. There never would have been an investigation at all if someone hadn't filmed it with their smartphone; 2. The officers involved aren't "white or otherwise"; they're white.

Maybe the wealthy part does almost all of the heavy lifting—as opposed to the color part. Food for thought.

Try again Marxists; you’ll fail with color, just like you failed with class.

"...when the system is allowed to work."

Rather: "... when the system is forced by the glare of public scrutiny to work in ways it would not ordinarily."

First, George Floyd's death is still being investigated, and the officers involved, white or otherwise, may face very steep prison sentences when the system is allowed to work.

Second, a murder-for-hire plot requires evidence to charge and convict the perpetrators. I've yet to see any evidence that those implicated are actually innocents being railroaded.

Talk about a strikeout from the editorial department...

"This is the two-tiered system of justice we have in the United States — a system that brutally punishes poor people of color, while treating with kid gloves the white and wealthy."