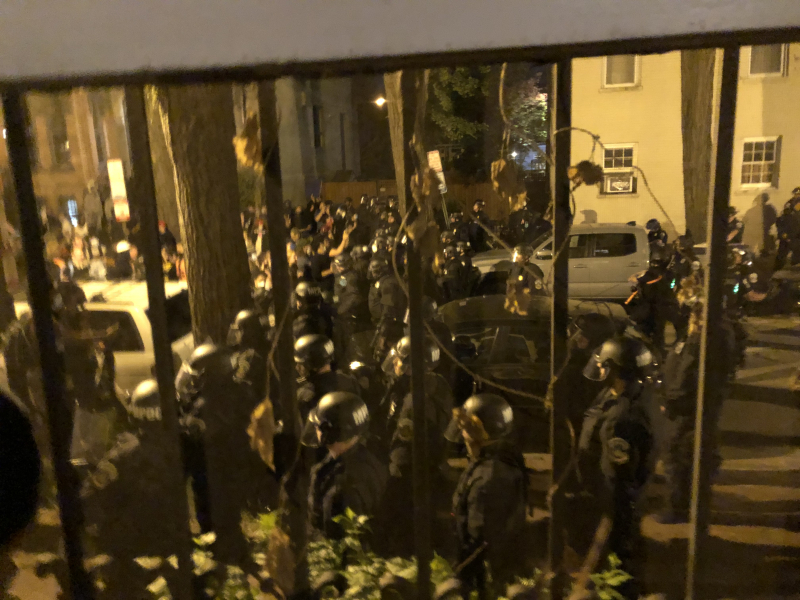 I thought the Tax Prof Blog community might be interested to know that a tax professor was one of the peaceful protestors trapped in a house on Swann Street for 8 hours while police gassed the house and tried to get inside.

After dinner on Monday, June 1st, my husband and I heard protestors outside our window. We support the movement for black lives and decided to join them. After two blocks of peacefully chanting ‘Black Lives Matter’ and ‘George Floyd,’ police directed us onto Swann Street. We complied. At the end of the block, we were greeted by roughly 50 National Guard soldiers in camouflage standing before military vehicles. We were unarmed, of course, in jeans and tee-shirts. We turned around and walked back towards 15th street, only to find riot police pooling into the street blocking any egress to our home. Above us, a military helicopter circled. Then, without provocation other than our peaceful assembly after curfew and chants for black lives, the police started firing gas at us and charging. I also heard explosions. There was a stampede as protesters tried to flee for their lives, afraid they would be bludgeoned, choked, stomped, or shot. By the grace of g-d, my husband and I were ushered into a stranger’s home with 70 other protesters. Police continued to shoot gas into the house. Choking on the fumes and crouched on the floor of the bedroom, I called journalists at WaPo and ProPublica desperate to have press deescalate the violence while braver black youth continued to take footage from the front room.  For hours, police continued to try to get into the house and we did not know if we would be casualties of a raid. We did not feel safe to leave till curfew lifted at 6:00 am.

There has been coverage on all the national networks (just search Swann Street and Rahul), but the best video I've seen is here on Huffington Post.

I have attached the picture I took from the front room of the house, which was then tweeted by Washington Post. I remain in awe of the black leaders who have withstood so much more than I and refuse to back down in the fight for equality. I share these details in support of my colleagues who have faced a lifetime of racial injustice and continue to lead the fight against white supremacy.

" without provocation other than our peaceful assembly after curfew "

Here's the thing about curfews. Law abiding, peaceful people generally abide by them.

By reasonable inference, people who break curfew, unless its by accident, may be willing to break the law. There's been a lot of looting and vandalism, which the curfews are meant to prevent.

So maybe next time just abide by the curfew. Not to mention social distancing.

I don't think coronavirus becomes less contagious just because you think your cause is just.

Oh, I hear everything you're saying. I know exactly what changed ideologically. It just really changed my perspective on so-called public health experts when they destroyed their credibility by blessing the protests, which will cause MORE PEOPLE TO DIE of the coronavirus, all because they felt obligated to goose-step behind one single movement, and to hell with the data on crime and police shootings...

While I’m not sure that such advice would necessarily be relevant - much less helpful - in the situation described, I observed more than a year ago that, in the majority of questionable shootings at vehicle stops by police of both black and white individuals, the individuals either may not have fully complied with police directions and/or may have made some sudden movement which could create concern for officer safety.

This is pointed out not to blame the individuals who were shot, nor to suggest that they deserved or asked for what happened to them - WHICH IS CERTAINLY NOT TRUE - but rather to suggest that, had they acted differently, they might not (perhaps) have become victims of police shootings - i.e., it might have helped prevent a tragedy.

To help educate and remind all drivers - perhaps especially those who are young, persons of color, etc. - how to act when stopped by police officers so as to minimize any chances of being shot, I developed at that time a set of simple and clear instructions for such situations.

They are designed to be mounted on both sides of both front-window sun visors where they will be readily visible to the driver and front-seat passenger at all times in the event that a car is stopped by the police.

They can be DOWNLOADED FOR FREE, and then printed on any computer printer, before being
mounted on the sun visors.

I respectfully urge all people concerned about this very serious problem to download and post this information today, and to alert other individuals and organizations likewise concerned about this service which is available FREE and without obligation to anyone with access to the Internet and a printer.

Also, I would welcome any suggestions for changes, modifications, and/or additions to the instructions from persons who may be more knowledgeable about such matters than I am, especially regarding the issue of whether a driver should (or should not) consent to a police search of the vehicle.

THAT’S HOW READERS CAN REALLY HELP TO ADDRESS THESE PROBLEMS.

Are these the same “peaceful protesters” who trashed the main shopping street in Phila. And required entire blocks of stores to be boarded up?

While I condemn the heavy-handed tactics of law enforcement vis-a-vis peaceful protestors, engaging in any kind of large-scale protest was in direct violation of the DC Mayor's stay-at-home order:

Just two weeks ago, I was considered a danger to public health if I dared to publicly protest the forced shutdown and elimination of hundreds of thousands of small businesses, and the impoverishment, misery, and death of formerly employed workers all over the country.

What changed, in terms of public health, from May 25th to May 26th?

Thank you Prof Bearer-Friend for your action and call to others to join in solidarity. I am working with the Economic Justice Committee of the ABA Civil Rights & Social Justice Section on a series of FREE #BlackTaxpayersMatter webinars that demonstrate how tax systems can better deliver justice, equality and the rule of law to communities of color. While tax systems do not explicitly discriminate on the basis of race (or even gather race-based data (See Bearer-Friend scholarship)), the devastating impact of COVID-19 on communities of color on top of centuries of racial economic discrimination contribute to a parade of horribles including persistent violence against Black men, women, families and communities. America needs thoughtful, diverse, broad engagement to finally resolve these issues now.

Thank you for your consideration and join me by sending your ideas for panels to Francine.lipman@unlv.edu

Wow. Has a movie studio purchased the life (night) story rights yet?

The melodrama is off the charts.

I have an idea to save lives:

Can we try that, just for the novelty, and see if it might possibly — by some miracle — work?