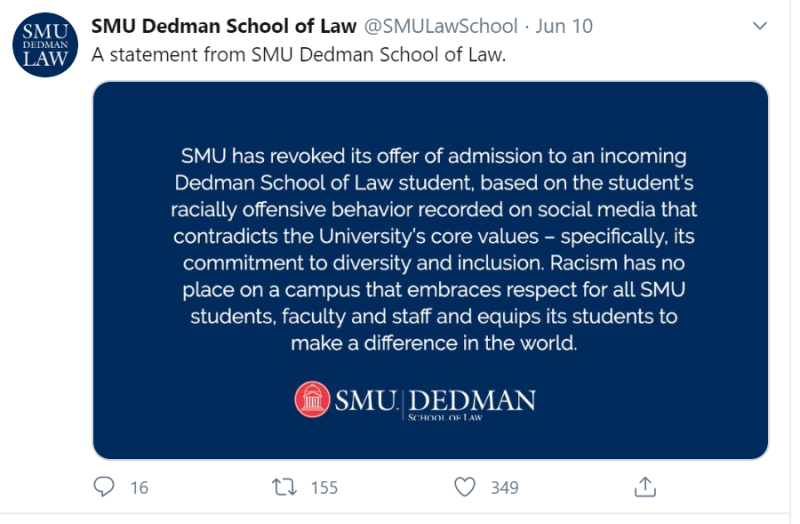 The law school did not release the student’s name or any details on the allegedly racist social media posts.

I think the message the law school is trying to send, based on its statement, is precisely that it disapproves of racist speech generally, and that anyone who holds and expresses racist views is at risk of being denied admission ("Racism has no place" …). And I wonder to what extent the message that applicants will receive, whether or not it's intended, is that anyone who expresses views that administrators label "racist" (potentially quite a large category) is at similar risk. ...

One question one might ask would be this: Do you think that private law schools in the 1950s should have revoked admission of students if administrators had concluded that the students had engaged in "pro-Communist offensive behavior"? I expect some would have and did, and again they would have been legally entitled to, but my question is whether they should have.

Above the Law, Law School Offer Of Admissions Rescinded Over ‘Racially Offensive Behavior’:

The school’s decision comes as #BlackAtSMU is trending where students are sharing their own stories of racism at the university. University President R. Gerald Turner said of the trending hashtag:

“It grieves me to read them because this is not what we envision for SMU,” Turner wrote. “The negative experiences shared through #BlackAtSMU are a stark reminder that we still have a lot of work to do.”

Students were cautiously optimistic about the university’s response to #BlackAtSMU, seeing it as a first step. The law school’s decision to revoke admission to someone publicly making offensive statements seems in line with the school’s commitment to “racial equality and inclusion.”

As for the student in question, let’s hope they finally learn some consequences for their online racism.

"The law school did not release the student’s name or any details on the allegedly racist social media posts."

How much you want to bet that there is no student, and this is just cheap genuflection by the school at the altar of leftist nonsense.

Will SMU next deal with its class privilege, its willingness to tolerate any behavior from athletes or donor's children, and its continued mistreatment of anyone who isn't the right kind? I doubt it. The university has routinely pulled scholarships from students who dare cross frats, athletes, or told the truth.

The problem is that we cannot trust the school’s jaundiced judgment about what is or is not racist.

No deviation from leftist orthodoxy will be tolerated. This is now a totalitarian society where one is required to mouth patently false slogans in order to keep one’s employment, schooling, etc.

Our elites have lost their minds and abandoned the liberal democratic values that built this country into the freest and fairest in history. Tribalism and dogma are the order of the day. This will not end well.

Good thing that liberal elites never accuse anyone of racism to advance their political agendas and smear their opponents. Let's all take these people at their word, without evidence, and rely on their good judgment and enthusiasm for differences of opinion. Like at Cornell Law, with William Jacobson.

I call BS on this. It's craven virtue signalling and there's no student involved anywhere.