The Ford Foundation plans to announce on Thursday that it will borrow $1 billion so that it can substantially increase the amount of money it distributes. To raise the money, the foundation — one of the country’s most well-known and oldest charitable organizations — is preparing to issue a combination of 30- and 50-year bonds, a financial maneuver common among governments and companies but extremely rare among nonprofit groups.

Four other leading charitable foundations will pledge on Thursday that they will join with Ford and increase their giving by at least $725 million.

The decision by the five influential foundations — major sponsors of social justice organizations, museums and the arts and environmental causes — could shatter the charitable world’s deeply entrenched tradition of fiscal restraint during periods of economic hardship. That conservatism has provoked anger that foundations, which benefit from generous federal tax breaks, are hoarding billions of dollars during a national emergency, more interested in safeguarding their endowments than in helping those in need.

The Ford Foundation, which has a $13.7 billion endowment, plans to distribute the newly raised money over the next two years, effectively increasing the percentage of its endowment that it pays out annually to about 10 percent from nearly 6 percent.

There are more than 100,000 private foundations in the United States, and they are together sitting on endowments worth nearly $1 trillion, according to Candid, a group that tracks nonprofit groups and foundations. Some — including the Bill and Melinda Gates Foundation — already pay out a substantial chunk of their endowments every year. But many more hover near the legal floor, on average distributing roughly 7 percent of their funds annually. 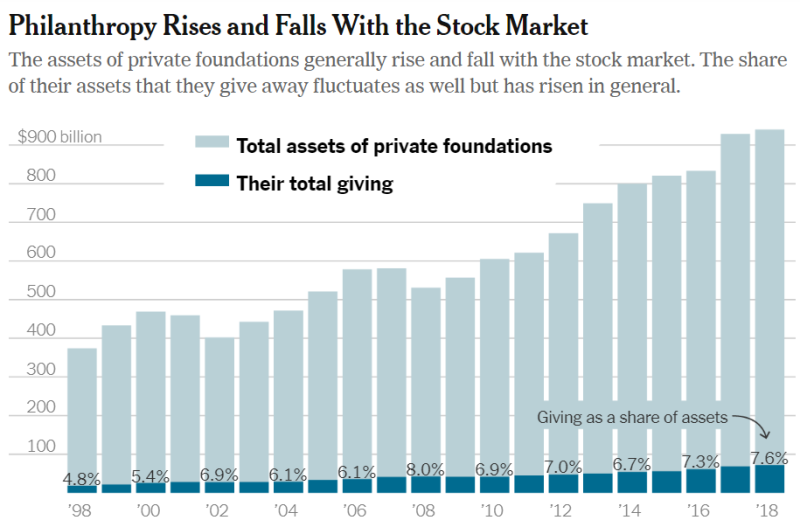 An increasingly vocal network of charitable figures, lawmakers and others wants to pry that piggy bank open. The Patriotic Millionaires — a group of about 200 wealthy individuals, including the Disney heiress Abigail Disney, that pushes for higher taxes on the rich — and the left-leaning Institute for Policy Studies have been pressing Congress to force foundations to double their required payout to 10 percent of their assets for the next three years.