This article uses U.S. corporate tax return data to assess how government revenue would have changed if, over the period 1957–2013, corporations had been subject to a hypothetical corporate cash flow tax—that is, a tax allowing for the immediate deduction of investments in long‐lived assets like equipment and structures—rather than the corporate tax regime actually in effect. Holding taxpayer behavior fixed, the data indicate actual corporate tax revenue over the most recent period (1995–2013) differed little from that under the hypothetical cash flow tax. This result has three important implications.

First, capital owners appear to bear a large fraction of the corporate tax today. This is because economic theory holds that corporate cash flow taxes are largely borne by capital owners and my result implies that the actual tax behaves in practice much like a cash flow tax. This theory is embodied in the Treasury's most recent model of corporate tax incidence. Applying the model to my results implies that only a small portion (2–10 percent) of the U.S. corporate tax was borne by labor in the years before the 2017 Act and thus capital providers are the primary beneficiaries of the Act's large corporate rate cut. Second, the results suggest that the United States could switch fully over to a cash flow tax, which is likely to be administratively simpler for both the government and corporations, at relatively low revenue cost. Third, the impact of fully switching to a cash flow tax on the operations of the real economy and its efficiency are likely to be fairly small. This is precisely because the corporate tax has already evolved to largely mimic a cash flow tax, and the article explores the reasons underlying this evolution using a novel dataset. 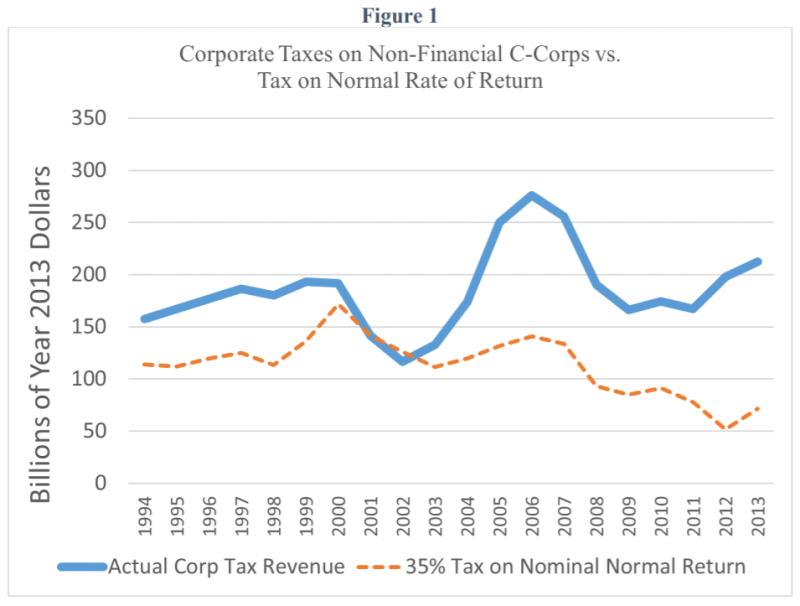