Former Economics Professor Files $7.9 Million Lawsuit Against University Of Illinois For Damages To His Reputation From Baseless Grades-For-Sex Investigation

Following up on my previous post, Illinois Econ Professor Resigns After He Admits Sharing Photos With Student But Denies Sex-For-Grade Allegation; Accuser Is Arrested On Related Charge: 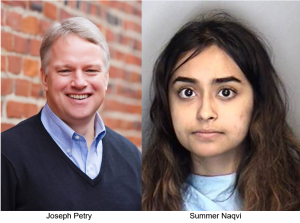 Former University of Illinois Professor Joseph Petry has filed a $7.9 million breach-of-contract lawsuit against the UI Board of Trustees in connection with his 2019 resignation agreement.

The lawsuit, filed Thursday in the Illinois Court of Claims, accuses the board of violating the terms of the resignation agreement signed in April 2019, according to Petry’s attorneys at the Urbana law firm Webber & Thies.

The agreement provided, in part, that in exchange for Petry’s resignation, the UI Office of Access and Equity would discontinue its investigation into all allegations made against him, the law firm said.

“Within days of the university making this promise, it sought to renegotiate its agreement to permit the continuation of its investigation,” the law firm said. “When Professor Petry did not agree to such a change, the university ignored its legal obligation and continued the investigation anyway.” ...

The one-count breach-of-contract complaint states that the UI’s investigation of Petry arose from false claims made by a former student he had sexually harassed her.

The allegations “were fabricated and the result of a student’s failed attempt to blackmail Petry into changing her grade,” the lawsuit states.

“Professor Petry seeks to recover damages he has incurred as a direct result of the university’s breach, including damages for loss of employment opportunities, reputational harm and mental distress,” it states.